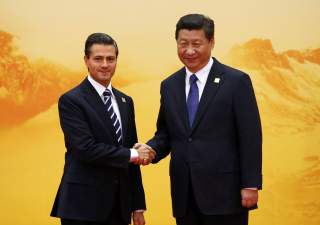 As the Trump administration contemplates border wall prototypes and dissolving the decades-old North American Free Trade Agreement (NAFTA), China is taking a decidedly different approach to relations with Mexico. In recent months, Beijing has launched an unprecedented charm offensive south of the Rio Grande. In addition to a series of new investments, and renewed talk of a bilateral trade pact, China invited Mexico as one of five nations to consider a “BRICS plus” arrangement, which would add new members of the global South to the now five-country grouping.

If the past decade was “a period of strategic opportunity” for China’s own development, based on a favorable external environment and the country’s growing economic competitiveness, the current one would also seem an auspicious moment for Beijing.

The range of policies emanating from Washington, in particular, has set an especially low bar for China in Latin America and other regions. In the case of Mexico, the U.S. president’s inflammatory rhetoric, the wall debate, and the recent move against the Deferred Action for Childhood Arrivals, which largely affects those of Mexican descent, are hastening Mexico’s diversification of its political and economic partnerships.

According to Maria Cristina Hernandez Zermeño, Director General for Asia and Oceania and Multinational Organizations at the Mexican Economy Ministry, who spoke at an October 2017 forum on Mexico-Japan relations, “Mexico is now orienting its economic efforts to diversify its ties with other economic poles.” The Director General explained that although U.S.-Mexico ties remain strong, the Asian region—especially China, Japan, and Korea—will be a key partner for Mexico in the coming years. Jorge Lomónaco, Mexico’s ambassador to the Organization of American States, made similar remarks during the Mexican Senate’s “Priorities in the 2017 Multilateral Agenda” forum, noting that Mexico is looking “for new strategic partners…to push forward those initiatives that reflect nationalinterests and priorities…”

As Mexico rethinks its international partnerships, Beijing is looking to fill likely voids. In the past few months alone, Chinese leaders have approached Mexico with a series of diplomatic offerings. In addition to extending Mexico an invitation to September’s BRICS Summit, China also alluded to Mexico’s key role in its Belt and Road Initiative (BRI), even though BRI maps don’t yet formally include the Latin American region. Mexico, as Chinese President Xi Jinping explained in September, is an “important pivot of the natural extension of Belt and Road construction in Latin America.”

China also recently proposed advancing the current China-Mexico Comprehensive Strategic Partnership to “a new situation with all-round cooperation.” In Chinese political speak, this shift would position the China-Mexico relationship alongside China’s ties to Germany, a historically robust relationship that might also be strengthening amid frustrations over Trump administration policy.

The numerous deals inked by China and Mexico in the past two years also point to warming relations. While in Hangzhou in September, Mexican President Enrique Peña Nieto signed an agreement with Alibaba Group Holding, Ltd. to feature Mexican products on the company’s e-commerce platform. Alibaba’s Jack Ma, who has become a de facto economic envoy for China, also promised to train Mexican entrepreneurs and improve Mexican logistics.

Prospects for enhanced China-Mexico ties are also presumably bolstered by recent developments in the trade relationship. Mexico’s extensive trade deficit with China has been a sticking point for Mexican policymakers for decades, but the trade dynamic is improving somewhat, according to reports from the Chinese Ministry of Commerce. Bilateral trade in goods increased by $1.78 billion, or 5 percent, between the first half of 2016 and the same period in 2017, reaching a total of $37.3 billion. In addition, due to growth in Chinese imports from Mexico, the South American nation’s $30 billion trade deficit with China reportedly shrunk over the past two years.

Mexico is additionally seeing minor improvements in access to the Chinese market. One trade-based initiative, the Henan-Guadalajara “Air Bridge,” which has been in the works since 2015, will facilitate the transport of Mexican beef, pork, melon, and papaya, in addition to other agricultural products to Henan, an interior Chinese province and key entry point for foreign meat and produce.

Some are skeptical of China’s recent overtures, or of Mexico’s capacity to act on them. Mexico’s former ambassador to China, Jorge Guajardo, has been openly critical of Mexico’s sudden interest in a relationship with Beijing. In a 2017 opinion piece in Mexico’s Reforma newspaper, he argued that due to a lack of economic complementarity between the two countries, every second Mexico commits to developing partnerships with China “is a second wasted.” Mexican China specialist Enrique Dussel Peters has also criticized those in Mexico who argue for a hasty shift in policy, stating in a March El Tiempo article that “Mexico is not institutionally ready for a medium or long-term relationship with China.”

Mexican officials have also downplayed growing China relations, suggesting that ties to China are mainly useful in their country’s dealings with the United States. During this year’s Mexico Business Forum, Secretary of Economy Ildefonso Guajardo Villarreal indicated that Mexico would “use [the president’s China visit] geopolitically as strategic leverage” with the United States during NAFTA renegotiation. And former Mexican Foreign Minister Jorge Castañeda characterized Mexico’s growing interest in China as an “expression of ‘machismo’” directed northward.

Indeed, despite renewed interest from China, and this relative low point in U.S.-Mexico affairs, the U.S. relationship is still focal point of Mexican foreign policy. Extensive trade-based, production-related, and people-to-people ties between Mexico and the United States bind the two economies—for better or worse. Mexican exports to the United States totaled over $302 billion in 2016, compared to $5.4 billion in Mexican exports to China, according to the Mexican Ministry of Economy. The sheer number of people of Mexican origin residing in the United States—over 33 million in 2013, according to the Pew Research Center—also generates valuable economic linkages.

With all of this in mind, the Peña Nieto administration has dedicated far more resources to renegotiating NAFTA than to exploring a possible free trade agreement (FTA) with the People’s Republic China. Beijing expressed continued interest in negotiating a trade pact with Mexico in July, but economic competition from China in Mexican and third markets limits FTA prospects. Even a feasibility study—a first step in the FTA process—has yet to materialize. Instead, Peña Nieto took time during his September visit to Hangzhou, China to stress the importance of NAFTA and the U.S.-Mexico relationship.

Slow progress thus far is rooted, to a considerable degree, in long-term structural challenges in the China-Mexico relationship. Whereas the trade imbalance is of issue for Mexico, China, too, is overcoming perceived obstacles. The 2014 cancellation of a high-profile rail deal in Querétaro was a near fatal blow to the relationship. After news surfaced that Mexico would revoke the train contract, numerous Chinese netizens took to the web to condemn the decision and caution against future dealings with Mexico.

Even so, Mexico’s ties to China are bound to gradually strengthen in the coming years. Mexican markets and resources are attractive to Chinese firms. And Beijing expects the Sino-Mexican relationship “to play an exemplary and leading role in building a community of shared future for China and Latin America.” Despite the obstacles, the possibility of Chinese “community-building” in Latin America is greater now than ever—especially if U.S. brinkmanship spells the end of NAFTA and other partnerships.