China's Permanent Conflict Strategy Is A Stroke of Genius 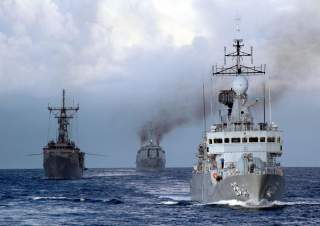 Tokyo lodged a series of protests over the weekend regarding renewed Chinese activity in the disputed East China Sea. Japan has claimed that China recently installed a radar on a Chinese offshore gas platform.

Japan’s protests occurred after incursions by as many as 230 Chinese fishing vessels and six coast guard ships in contiguous zones surrounding the Senkakus on Saturday, and intrusions by two Chinese coast guard vessels into the territorial waters around the islets on Sunday. On Friday, eight Chinese fishing and coast guard vessels also reportedly entered territorial waters around the Senkakus. Tokyo, which administers and claims ownership over three of the Senkaku islets—Uotsuri, Kitakojima and Minamikojima—has been locked in a longstanding dispute with Beijing over the area, which is also claimed by Taiwan.

Japan’s foreign ministry has also revealed that China had installed an ocean radar system and surveillance cameras on one of the sixteen gas-drilling platforms it currently operates in international waters in the East China Sea. Tokyo has accused Beijing of breaking a bilateral cooperation agreement on co-exploration of gas reserves in the East China Sea by unilaterally developing the area. The foreign ministry said the radar, which Japan claims is similar the type normally found on patrol vessels, was discovered in June and called for the immediate removal of the equipment.

If confirmed, the radar facility could have military applications and echo similar moves by China in the South China Sea, where civilian-purpose installations have gradually been militarized.

While it may be tempting to question the wisdom of Beijing’s constantly agitating on two separate fronts—four, if we include the Taiwan Strait and China’s border with India—there is nothing irrational about its behavior. It is in fact calculated, calibrated and manageable, and so far it has been highly successful.

Although its recent actions in the South and East China Seas have alarmed the region and encouraged the creation of a countervailing regional security alliance hinging around the United States, China has nevertheless calibrated its activities so as to avoid the kind of destabilization that would cause military clashes with its neighbors or force a U.S. military intervention beyond freedom of navigation patrols. Yes, China’s militarization of the South China Sea and its intransigence in the territorial dispute no doubt contributed to last month’s ruling against it by the Permanent Court of Arbitration (PCA) in the Hague, ostensibly giving the Philippines a temporary victory, but even there the reputational blow isn’t fatal, nor will it alter Beijing’s position on this issue.

In fact, the regional and international reactions to its territorial ambitions conceivably feed into, and perhaps are even part of, Beijing’s two-pronged approach, one domestic and the other external, to expansionism.

The first is the reinforcing of the narrative which the Chinese Communist Party (CCP) has been cultivating domestically—foreign containment and China’s victimhood. Here, the advantages of the two-front strategy become apparent. In order to maintain the nationalistic-expansionist narrative that buttresses support for the CCP in China, Beijing must be in a constant state of managed conflict. This means that the conflict cannot escalate into armed conflict, which isn’t in China’s interest, but at the same time it cannot de-escalate the situation because doing so—as I argued previously—would constitute a loss of face with the Chinese public.

The Chinese leadership is well aware that waging war on two fronts can be disastrous for even the most battle-hardened militaries. But war isn’t what it has in mind, and it will likely go to great lengths to avoid such an outcome: permanent conflict, is instead the current strategy.

With two (or four) different fronts that can be activated almost at will, Beijing has therefore ensured it can satisfy the demands of an increasingly nationalistic public by proving that it is standing up for China’s interests and not backing down despite all the external forces that are conspiring against it.

Beijing has alternated its escalatory measures between the East and the South China Sea. When it looks like its actions might prompt a muscular response from its adversaries, it pulls back temporarily but renews its activities in the other theater of operations. This oscillation, which has been going on for the past few years, could explain why last week’s naval incursions near the Senkakus were described by Tokyo as larger than usual, and why Japanese are now saying that Sino-Japanese relations are rapidly deteriorating. The PCA ruling did not, as some analysts had expected, compel Beijing to abandon its territorial ambitions and become a responsible stakeholder; instead, it only indicated that the time had come for Beijing to shift its escalatory activities back to the East China Sea, where the action will conceivably be for the next little while. The PCA squeezed the water balloon in the South China Sea, and it filled up elsewhere. Rarely, if ever, has China upped the ante on two fronts simultaneously.

Two steps forward, one step back

The second, external component of China’s multiple-front (or water balloon) strategy involves incrementalism and osmosis. By alternating between the two (or four) fronts whenever it reaches a point when its actions risk prompting a devastating response (e.g., armed intervention) from its competitors, Beijing has succeeded in whittling away at the edges and creating facts on the ground. How else could China, in defiance of international law and the U.S.’ rebalancing to Asia, have gotten away with the virtual occupation—and militarization—of the South China Sea, or the unilateral declaration, in November 2013, of an Air-Defense Identification Zone (ADIZ) over the East China Sea?

China’s expansionist strategy is in fact brilliant and has been brilliantly executed. By creating two main fronts and two secondary ones (Taiwan and Arunachal Pradesh), Beijing has four useful “crises” at its disposal which it can elevate and de-escalate at will to satisfy the demands of nationalism at home while exploiting ambitions whenever and wherever it occurs. By juggling these four balls, China ensures it will always make small gains somewhere, even when it faces temporary setbacks in another area, as happened with last month’s PCA ruling. As long as it makes gains in the aggregate, China’s strategy of permanent conflict will continue to pay dividends. Opportunities will arise, chinks in its opponents’s armor will appear and it will patiently wait for those. Just as importantly, it has calibrated its approach so as to avoid any of those conflicts provoking more serious countermeasures for which, for all its wanted prowess, the People’s Liberation Army (PLA) isn’t prepared, all the more so if the pushback involved a U.S.-led coalition.

For all its failings, the CCP isn’t delusional, and it is well aware that it cannot resolve all the territorial conflicts in its favor—at least not through the use of force, and certainly not for the foreseeable future. Thus, despite its stated ambitions and purported “core interests,” Beijing knows it cannot prevail upon all its adversaries in the East and South China Sea, against Taiwan and against India, especially not at a time of renewed U.S. engagement in the region. For the time being and given the prevailing conditions, a state of permanent conflict in alternating areas—not war—best suits Beijing’s interests.

J. Michael Cole is a Taipei-based senior nonresident fellow with the University of Nottingham’s China Policy Institute and an associate researcher with the French Center for Research on Contemporary China. He is currently editor in chief of The News Lens International. Follow him on Twitter: @JMichaelCole1.