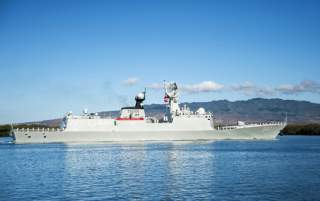 America’s strategic primacy in Asia is at stake. China’s astute economic diplomacy—aimed at challenging the Bretton Woods system (BWS) of global governance—and accelerated construction activities in the South China Sea, an artery of global trade, are chipping away at the very foundations of the decades-long U.S.-led order in Asia. And a whole range of U.S. partners, from the Philippines to Vietnam to Japan, are anxiously watching China’s ever-expanding shadow across the Asia-Pacific theater.

On the economic front, the United Kingdom’s early-March decision to join the China-led Asia Infrastructure Investment Bank (AIIB) has irreversibly cracked the U.S.-led siege against the proposed financial body. The participation of the United States’ closest (European) ally as a founding member of the AIIB has paved the way for long-standing European partners, from Germany to Italy to France, and leading Asia allies, particularly Australia and South Korea, to jump on the China economic bandwagon. Even Japan, which sees the AIIB as nothing less than a direct challenge to the Asian Development Bank (ADB), is considering its options.

Prior to London’s strategic mutiny, Washington delicately managed to successfully stage a collective boycott against the AIIB, leaving the China-backed bank stacked with mostly developing countries with limited capital to spare. At some point, Chinese officials began wondering whether the AIIB would make any commercial sense at all, shifting their attention to more financially viable options, such as the proposed Maritime Silk Road initiative. Formally, Washington has raised concerns over the AIIB’s compliance with existing good governance, transparency and environmental-sustainability standards embodied by the World Bank, the ADB and the IMF.

In reality, however, the key concern is whether China will use the AIIB as a Trojan horse for its broader strategic interests in Asia, utilizing the prowess of its financial resource to buy the loyalty of its neighbors. After all, if China was really interested in bridging the infrastructure spending gap in Asia, it could have simply increased its contribution to the (Japan-dominated) ADB. As prominent Chinese scholar Yan Xuetong, bluntly puts it: “The policy now is to allow these smaller [neighboring] countries to benefit economically from their relationships with China. For China, we need good relationships more urgently than we need economic development. We let them benefit economically, and in return we get good political relationships. We should ‘purchase’ the relationships.”

What we are witnessing today is President Xi Jinping’s “Peripheral Diplomacy” initiative in action, a strategy that gained pace after the Chinese Communist Party’s Foreign Affairs Leading Group meeting in late-2014, the first in eight years. The key challenge, however, is with respect to China’s unabated effort at consolidating its strategic depth in adjacent waters, particularly in the South China Sea, where it is clearly winning the scramble for bitterly contested islands and marine resources.

In light of the AIIB fiasco, which clearly marks a major symbolic victory for Chinese soft power, the United States has responded with sound and fury. Senior American officials have bluntly expressed their outrage over the UK's decision, stating how Washington is "wary about a trend toward constant accommodation of China, which is not the best way to engage a rising power.”

A statement by the National Security Council expressed Washington's "concerns about whether the AIIB will meet these high standards, particularly related to governance, and environmental and social safeguards,” encouraging China to ensure the AIIB will "complement the existing architecture, and to work effectively alongside the World Bank and Asian Development Bank.” With the World Bank, IMF and ADB also expressing their support for the AIIB, Washington has had no choice but to soften its criticism of the China-led body. Recovering from a major strategic setback, top American officials, such as Treasury Secretary Jack Lew, have stated that the United States “welcome[s] China having a significant role in the global economic and financial architecture,” provided, of course, it will “complement existing international financial institutions . . . and share the international community’s strong commitment to genuine multilateral decision making and ever-improving lending standards and safeguards.”

Asian triumphalists, such as Kishore Mahbubani, author of The Great Convergence: Asia, the West, and the Logic of One World, have happily embraced the AIIB—and China’s rising economic profile on the global stage. For Mahbubani, “this new competition between America and China to produce better multilateral institutions will be good for the world.” The former Singaporean diplomat adds, “[i]t does not matter whether America wins or China wins. Either way, we will see an improvement in the standards of managing institutions of global governance.” The intensifying Sino-American rivalry ultimately means, Mahbubani argues, “the Asian people will be better off. And the Asian century will arrive faster.”

In fairness, China’s decision to challenge the BWS by establishing new initiatives, such as the AIIB, the New Development Bank and the New Silk Road initiative, is partly driven by emerging powers’ deepening frustration with the lack of much-needed reforms in the World Bank and the IMF, largely thanks to the unwillingness of the U.S. Congress to ratify proposed reforms in 2010.

With $4 trillion dollars in its coffers, China—the world’s biggest economy in purchasing power parity terms—is in a strong position to bridge the $8 trillion infrastructure spending deficit in Asia. Given the inherent volatilities of currency markets, China is interested in redirecting its financial reserves towards tangible, commercially viable investment opportunities.

Time for a Robust Response

The problem with Mahbubani’s argument, however, is that it treats Sino-American rivalry in Asia like a free-market competition between corporate giants, paving the way for global multipolarity.

But what we are facing is not a microeconomic case of efficient, profit-driven firms competing for market shares. As China grows richer, becoming “moderately prosperous,” it is more concerned with prestige, influence and the pursuit of the “China Dream”—recreating the Sino-centric order in Asia. Peripheral diplomacy is primarily about challenging American primacy and deepening China’s strategic depth in its backyard.

China’s economic charm-offensive has gone hand in hand with gobbling up contested islands and marine resources in the South China Sea, anchored by accelerated construction activities, which don’t only violate the spirit of international law, particularly the United Nations Convention on the Law of the Sea, but also pave the way for the establishment of a Chinese Air Defense Identification Zone (ADIZ)—or a similar form of military domain—in one of the world’s most important Sea Lines of Communication (SLOC). If the fundamental motivation for the Pivot to Asia (P2A) policy is to reassert American position as an anchor of stability and prosperity in the region, then Washington has to decisively respond to China’s economic and maritime blitzkrieg in Asia. Obviously, sustained economic recovery will be crucial to America’s ability to maintain a semblance of economic relevance in Asia. The successful conclusion of the Trans-Pacific Partnership (TPP) free trade agreement will have to be complemented by sustained direct investments in and diplomatic engagement with the region.

On the security front, Washington has to urgently respond to Beijing’s turbo-charged salami-slicing strategy in the South China Sea. American partners, particularly the Philippines and Vietnam, may have the political will to confront China, but they the lack sufficient capability to do so. The Association of Southeast Asian Nations (ASEAN), meanwhile, has oscillated between neutrality and centrality vis-à-vis the ongoing disputes, prompting veteran regional experts, such as Barry Desker, a Singaporean diplomat and the former head of the prestigious Rajaratnam School of International Studies (RSIS), to lament “The ability of external parties to shape the positions of ASEAN members on regional issues such as the competing maritime claims in the South China Sea.” The ASEAN’s relevance is under question.

Yet, any American response to Chinese maritime assertiveness should neither be unilateral, nor primarily military in nature. By utilizing its unique “convening power,” Washington can assemble a coalition of forces to ensure maritime stability in the South China Sea.

One of the most interesting proposals on the table is the recent suggestion by Vice Admiral Robert Thomas, commander of the U.S. Pacific Fleet, to establish a multilateral maritime patrol coalition to act as a peacekeeping force in the contested areas. To encourage his ASEAN partners, Thomas stated “If ASEAN members were to take the lead in organizing something along those lines, trust me, the U.S. 7th Fleet would be ready to support.” Shortly after, Malaysia, the current chairman of the ASEAN, endorsed Thomas’ proposal. Malaysian defense minister Hishammuddin Hussein didn’t hesitate to underscore the urgency of addressing China’s maritime assertiveness, stating: “If we continue to look only at dotted lines [China’s claim to practically the entire South China Sea] and competing claims, the future looks very bleak.”

There is already precedence for this in Southeast Asia. In the Strait of Malacca, Thailand, Singapore, Indonesia and Malaysia have, since 2004, participated in joint patrols against nontraditional security threats, such as maritime piracy. The United States has also asked the Japanese Maritime Self Defense Forces to contribute to such efforts. The Japanese Defense Ministry seems to be receptive to such a proposal, especially in light of the Abe administration’s concerted effort at carving out a new security role for Japan in the region.