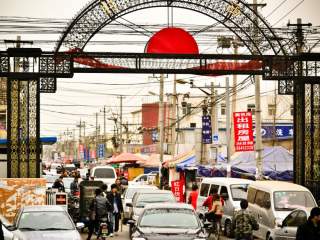 To foreigners, mainland China can be an anarchistic and chaotic place where the rules, both social and legal, are treated more-or-less like paternal suggestions rather than codes of conduct. One of the most glaring examples of the complete disregard for rules among the Chinese populace is driving. Despite the Road Traffic Safety Laws of the People’s Republic of China being as robust and comprehensive as any developed country, it is not uncommon to see Chinese drivers blatantly, and sometimes aggressively, violating the spirit and intention of the law. Red lights are constantly ignored and lanes are treated more like suggestions. The probability of being caught breaking the law is so incredibly low that it makes perfect sense to disobey the rules.

Even if an individual is caught, it is not impossible to avoid punishment by simply using someone else’s driver’s license. Unfathomable to most foreigners, it is not uncommon to see people selling the use of their driver’s license outside of local police stations. With such lax enforcement and easy avoidance of penalties, it is easy to see that driving in China is a game of brinkmanship: every car jostling to get ahead of another with accidents always imminent. The reason for such disregard for the law is simple: lack of enforcement.

The anarchy of driving in China resulting from the lax enforcement of codes of conduct is a microcosm of Chinese political, economic and civil society. China’s first constitution was written in 1954, and since then the country has established various ministries and bureaus to create and enforce economic, social and political rules of law. However, despite the monolithic appearance of Beijing, the vast majority of Chinese citizens not only recognize but also embrace organized chaos as the de facto economic and political system.

This anarchistic de facto rule of law breeds not only corruption within government, but distrust within Chinese civil society. Many Chinese trust neither their government nor their fellow citizens. In such an environment, a game of brinkmanship based on guanxi (the cultivation of relationships that result in the exchange of favors that are beneficial for both parties) is created. When a law is vague, it is guanxi that determines its meaning. When a law is violated, it is guanxi that determines the penalty. Fundamentally, this means that the success or failure of many business ventures in China has much more to do with political and social connections than actually following any laws.

This model of doing business is anathema to Westerners, who operate under a system of predictable and consistent codes of conduct and rules of law. The future of China, to put it bluntly, lies in the development of its political and civil society, not in its economics—something that many analysts seem to miss.

For the past twenty years, the source of the Communist Party of China’s (CPC) political legitimacy has been economic prosperity. The CPC has maintained their grip on power through “performance-based legitimacy,” writes economist Guy de Jonquières in a policy brief for the European Center for International Political Economy.

After years of double-digit growth, a global slowdown in trade and consumption has to begin to erode this core source of legitimacy. For the first time since Deng Xiaoping opened up the mainland to international-capital inflows, China's outbound investment in 2015 surpassed that of inbound investment. The decrease in inbound investments is not unexpected, and in fact highlights what everyone from economists to CPC politicians already know: the current Chinese economic model is outdated and in desperate need of reform. Despite CPC political power brokers knowing what needs to be done, Beijing is facing a nightmare scenario in which President Xi Jinping and Premier Li Keqiang must paradoxically reduce CPC influence over social and political life while simultaneously cultivating respect for the rule of law.

This paradox is rooted in the Chinese proverb: tian gao, huángdì yuan (heaven is high and the emperor is far away). While examples of this proverb can be seen in many elements of Chinese civil society, such as driving, Chinese political leaders and civil servants are especially susceptible to this modus operandi and it is the fundamental reason guanxi is so important.

It is this attitude and code of conduct that is paralyzing China from moving forward with its economic reforms. Instead of promoting healthy competition between different regions, the decentralization of power necessary to many economic reforms going forward may give way to political brinkmanship where politicians tempt fate with how much power and wealth they can amass before they attract the ire of Beijing. A recent example of this political brinkmanship gone awry is the 2013 trial and subsequent conviction of Shandong Province’s rising star, Bo Xilai.

While Xi may be unable to enforce the rule of law on his countrymen for fear of civil unrest, he can certainly enforce codes of conduct on fellow party members. In a January 2015 speech, Xi stated,

Political discipline and rules exist to enable CPC cadres to defend the authority of the CPC Central Committee and cadres must follow those rules, aligning themselves with the committee in deed and thought, at all times and in any situation. Party unity must be ensured.

While many Western analysts have claimed that Xi’s call for party unity is nothing but a pretext for consolidating power and embracing a cult of personality, one wonders whether this is necessarily a bad political move given the current lack of party unity and susceptibility of politicians to believe that Beijing is too far away to notice their use of guanxi or their antipathy for Beijing’s rules.

In fact, Xi’s political ambitions are more nuanced than appearances suggest. Guy de Jonquieres argues in his policy brief that there are at least two additional factors guiding Xi’s very public anticorruption campaign. The first is publicity: corruption has long been reluctantly accepted as the price of economic prosperity. But the inefficiencies caused by such unproductive rent-seeking behavior have become such a drag on economic activity that Beijing can no longer simply ignore it.

The second is the dismantling of vested interest groups lodged within the CPC that are opposed to economic reforms. These groups have profited handsomely from the “Old Normal” and they dread the approaching “New Normal” that Xi and his supporters are posturing to enact. These vested interest groups have amassed such enormous amounts of wealth and political capital through their use of guanxi that they will resist any threat to the status quo.

In a March 2015 speech, Xi stated “no organization or individual shall be permitted to enjoy special privileges that place them above the Constitution and law” and that, only by dismantling and destroying those groups and institutions that believe they are, “will we stand a chance of genuinely realizing the rule of law.” In essence, Xi is calling for the destruction of the guanxi system that is currently in place.

Despite all the rhetoric, the most common complaint among foreign companies is still the complex web of government watchdogs, ministries and unexpected changes in regulations that are endemic to doing business in China and the system of guanxi. According to the American Chamber of Commerce’s 2016 China Business Climate Survey Report, 57 percent of respondents listed inconsistent regulatory interpretation as the top challenge for American businesses in China.

If Xi is successful in building a public and civil society built on the rule of law rather than the rule of men, then such complaints will become moot. Not only would regulation be streamlined by delegating power and authority to provincial and municipal governments without fear of insurrection, but these rules of law would be predictable and consistent—something for which international businesses and investors are clamoring. In addition, instead of Beijing directly guiding economic reforms through special economic zones, local municipalities and provinces could experiment with deregulation and market policies within the framework Beijing sets. By simply cultivating a sense of rule of law and trust in the CPC, along with restoring its legitimacy, Xi could usher in a new paradigm in Beijing’s relationship with local governments and the economy.

In such a future as envisioned by Xi, provinces would be forced to compete on their ability to attract foreign investment rather than extrajudicial benefits based on guanxi. By providing details on a long-term provincial growth strategy, aggrandizing regional comparative advantages, and promoting technological innovation and industry-specific research hubs, local governments would become more accountable to Beijing and local residents. This increased competition for investments will spur innovation and economic growth, which in turn will increase the quality of life for the local population with better paying jobs and a more diverse industrial sector for workers to chose from and prepare to enter.

In the southern Chinese province of Guangdong, the city of Foshan has been an important innovator in changing the way the government does business. In 2013, Foshan embarked on an experiment, hiring China's first foreign business investment consultants that work directly for the Chinese government in the Foshan Bureau of Commerce. Local government officials in Foshan reasoned that using foreign consultants would ease the communication barrier, business culture and networking burdens that often plague Sino/Western business relations in China. The foreign consultants have been responsible for revamping the bureau's English language website, representing the city in trade and investment fairs, and connecting investors with local government officials who are keen on increasing investment in the city.