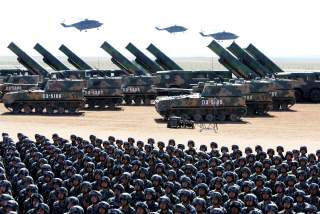 Assumption: China’s base in Djibouti is simply a logistics facility that will support long-standing counterpiracy operations in the region.

Fact: No, China’s base in Djibouti represents a fundamental shift in the PRC’s foreign and security policy.

For years the PRC has taken the position that China would never have overseas bases, and it has often used the U.S. military’s foreign installation around the globe as a tool to both criticize U.S. foreign policy, and to differentiate itself from the west. The official newspaper of the Central Committee of the Communist Party of China School, for example, has argued that U.S. overseas military bases are the “most important strategic resource” of the United States in maintaining its global hegemony. With the establishment of China’s first ever overseas base, it becomes increasingly difficult for the China to make that argument.

Of course, since China first acknowledged that it was building its facility in Djibouti, official PRC and PLA spokesman have vehemently denied that it is a “base,” in the general sense of the term, referring to it only as a logistics facility. When the PRC first broke the news of its planned facility during a regular press conference in November of 2015, the Chinese Foreign Ministry’s official English-language translation of that press conference simply stated that “[China and Djibouti] are consulting with each other on the building of logistical facilities in Djibouti, which will better guarantee Chinese troops to carry out international peacekeeping operations, escort missions in the Gulf of Aden and the Somali waters, humanitarian relief, and other tasks.”

Yet during the ceremony on July 11 for Chinese marines departing for Djibouti, Chinese military officials clearly referred to the facility as a “support base” (baozhang jidi), which has a much different connotation within the Chinese military lexicon. According to Chinese military terminology, the phrase “baozhang” in this context can indeed refer to the provision of food, fuel or maintenance assistance to Chinese navy ships and crew involved in Gulf of Aden escort operations. However, “baozhang” can also imply conducting reconnaissance operations, collecting meteorological and weather data, providing communications support, as well as intelligence collection.

Perhaps most importantly, China’s new base is a concrete manifestation of the PLA Navy’s “near seas defense far seas protection” (jinhai fangyu, yuanhai huwei 近海 防御 远海 护卫)strategy. In its 2015 defense white paper, the Chinese government officially used the term in describing the PLA Navy’s new naval strategy. Chinese interlocutors have often described this strategy in two parts. There is the “near seas defense” component, which refers to the PLA Navy’s most critical maritime-security missions close to home, and the “far seas protection” component, which alludes to the navy’s new responsibilities in securing access to vital sea lines of communication, and protecting Chinese citizens and investments abroad. China’s base in Djibouti is situated in a highly strategic location, directly on the Bab el Mandeb Strait connecting the Gulf of Aden to the Red Sea and on through to the Mediterranean, and near China’s growing economic and commercial interests in East Africa. Given the position of China’s Djibouti base, located along a critical maritime chokepoint and near China’s growing economic and commercial interests in East Africa, it appears the establishment of this facility is an example of China’s new naval strategy in action.

Assumption: Djibouti will not be China’s last overseas military facility.

Fact: This is probably true, but China has moved with exceeding caution in establishing its first overseas base, and it may be quite some time before we see a second one.

China has been discussing the possibility of an overseas logistics facility in the Gulf of Aden region ever since it first began sending ships to the region to conduct counterpiracy operations in 2008. As early as 2009, retired Chinese navy officer turned public commentator Rear Adm. Yin Zhuo suggested in an interview with Chinese state radio that China should establish a base in the Gulf of Aden, arguing that “a relatively solid base for resupply and repair would be appropriate.” Djiboutian military personnel have also been signaling their interest in having the PLA set up shop for some time as well. In 2011, Djibouti naval Commander Col. Abdourahman Aden Cher was quoted in the Chinese press as stating that China was “welcomed to build a military base in Djibouti.”

Yet despite the clear interest of both parties, PRC officials did not announce the deal until 2015, and did not send forces to Djibouti until 2017.

To be sure, China is indeed considering other locations for additional overseas bases. An article written by Adm. Sun Jianguo, the deputy chief of the joint staff department responsible for the PLA’s overseas engagement portfolio, and published in Qiushi, the official journal of the Central Committee of the Communist Party of China School, President Xi Jinping has instructed the PLA to “steadily advance overseas base construction.” In March 2016, in response to a reporter’s question about how China will protect its overseas interests, China’s foreign minister Wang Yi simply stated, “We are willing to try to carry out the construction of infrastructure facilities and logistic capacity in the regions where China’s interest is involved.” This is a far cry from past statements by China’s Foreign Ministry spokesmen, who would decry as “groundless” the first hint of any such rumor that the PLA may be interested setting up overseas.

Chinese military analysts have already publicly speculated about several potential locations. Analysts at China’s Naval Research Institute, the PLA Navy’s top think tank, have proposed locations ranging from Gwadar, Pakistan and Hambantota, Sri Lanka in South Asia, to Sittwe, Myanmar in Southeast Asia, and even Dar es Salaam, south of Djibouti on Africa’s east coast in Tanzania. Each of these locations have their own unique sets of challenges for China, however, and given the excessive caution with which China moved in establishing its first location in Djibouti, it may be quite some before we see a second.

Disclaimer: This piece represents the views of the authors and not those of CNA Corporation or the United States Navy.

This article is based on a report written by Erica Downs, Jeffrey Becker and Patrick deGategno, China’s Military Support Facility in Djibouti: The Economic and Security Dimensions of China’s First Overseas Base, CNA, July 2017.