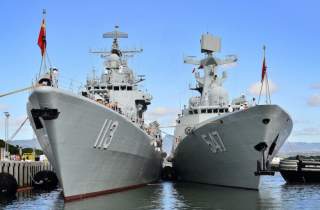 The Arbitral Tribunal in the Philippines-China case will likely release its much-awaited judgment in the next few weeks. For the Philippines—a veritable David to China’s Goliath in terms of economic, political and military might—a favorable decision serves as the best form of “lawfare” and will be an international legal validation of its main submissions, which are solidly anchored in United Nations Convention on the Law of the Sea (UNCLOS) provisions and general principles of international law. Unfortunately, victory in this case will likely not lead to closure for a country that has pinned so much hope on its outcome. The obvious problem is that China has refused to participate in the arbitral process, and has even gone so far as to denounce the whole thing as “illegal.” Even though the tribunal has neatly disposed of China’s arguments pertaining to jurisdiction, it continues to insist that the dispute must be exclusively settled via bilateral negotiations. Perhaps to prove its point, China has in the meantime been doing its absolute best to reshape the status quo in a way that makes its possible loss in the arbitration virtually irrelevant and beside the point.

China has been rapidly and unabashedly changing the physical characteristics of the South China Sea (SCS) via its massive island-building program in the Spratlys, which began in early 2014. In just under two years, China was able to transform the uninhabitable to the habitable: Mischief Reef, Cuarteron Reef, Hughes Reef, Johnson South Reef, Fiery Cross Reef, the Gaven Reefs and Subi Reef are now unrecognizable as the reefs and rocks that they once were. China’s Foreign Ministry has sought to frame the island building as a force for regional good—that it would help China fulfill its international legal obligations in maritime search and rescue, disaster prevention and mitigation, marine scientific research, meteorological observation, environmental protection, navigation safety, fisheries production and other endeavors. However, this is a situation where motive clearly takes a backseat to audience impact. Chinese force projection is on everyone’s mind as China continues to convert SCS features into mid-ocean outposts for its military and nonmilitary assets. One cannot help but be skeptical of China’s rhetoric when, so far, the newly built “islands” have only resulted in generating widespread concerns about their marine environmental impact, their effect on fisheries access and their ramifications on freedom of navigation in the disputed area.

The question to be asked, then, is this: Does China’s “island-building” program indicate a lack of self-restraint in view of the ongoing maritime dispute?

The phrase “self-restraint” appears in Paragraph 5 of the 2002 Declaration on the Conduct of the Parties, which provides that “the Parties undertake to exercise self-restraint in the conduct of activities that would complicate or escalate disputes and affect peace and stability including, among others, refraining from action of inhabiting on the presently uninhabited islands, reefs, shoals, cays, and other features and to handle their differences in a constructive manner.” Apart from a cursory (yet enlightening) mention of the duty to refrain from inhabiting uninhabited features in the SCS, the declaration unfortunately fails to define specific activities that would “complicate or escalate disputes” or “affect peace and stability.”

Perhaps it would also be helpful to remember that at its core, the SCS dispute is a maritime delimitation problem which can and should be resolved under the auspices of UNCLOS. In such situations, Articles 74(3) and 83(3) of UNCLOS exhorts claimants in an active delimitation issue to not “jeopardize or hamper the reaching of the final agreement.” International legal jurisprudence has since clarified that making permanent physical changes to the disputed area falls squarely within the ambit of this phrase. In the Aegean Continental Shelf case between Greece and Turkey, for example, the International Court of Justice, in considering these provisions, noted the difference between activities of a transitory character and activities that risk irreparable prejudice to the position of the other party to the dispute. Greece had asked the ICJ to exercise its right to indicate interim measures and order Turkey to refrain from all seismic exploration in disputed waters (an activity involving the detonation of small explosions aimed at sending sound waves through the seabed) without its consent pending a final judgment. The Court declined to indicate interim measures, citing three factors: (1) the fact that seismic exploration does not involve any risk of physical damage to the seabed or subsoil, (2) that the activities are of a transitory character and do not involve the establishment of installations, and (3) that the operations did not involve the actual appropriation or other use of the natural resources. Under the circumstances, the ICJ found that Turkey’s conduct did not pose risk of irreparable prejudice to Greece’s rights in issue in the proceedings. In the Guyana-Suriname UNCLOS arbitration case, the arbitral tribunal similarly said that in order to be permissible, an act that causes permanent physical change would have to be undertaken pursuant to an agreement between the parties to a maritime delimitation. It explicitly said that such acts, if done unilaterally, may hamper or jeopardize the reaching of a final agreement on delimitation.

Applying these standards to China, it becomes clear that its unilateral transformation of various features in the SCS pending the resolution of the complex multistate claims over them demonstrates a lack of self-restraint. As China continues to make permanent changes, it steadily erodes whatever confidence that other states may have in its willingness to engage in meaningful and genuine negotiations. Its failure to exercise self-restraint in this sense signifies just how intractable its position is with respect to its “territory” in the SCS. In the North Sea Continental Shelf Case, the ICJ relevantly noted that parties to a delimitation case “are under an obligation to so conduct themselves that the negotiations are meaningful, which will not be the case when either of them insists upon its own position without contemplating modification of it.” To say then that that this would “complicate or escalate disputes” or “affect peace and stability” in the region is certainly an understatement. At the very least, China’s posture in the SCS makes it increasingly difficult to reopen bilateral discussions, since the buildup of these “islands” practically makes Chinese control over them a fait accompli.

At the end of the day, the SCS dispute boils down to a question of good faith. Who has it? Who doesn’t? Exercising self-restraint and making an earnest effort to prevent the escalation of tensions will certainly go a long way towards defusing tensions and plugging the confidence gap in the SCS.

Jacqueline Espenilla is a Non-Resident WSD-Handa Fellow at the Pacific Forum, Center for Strategic and International Studies and a Visiting Research Scholar at Columbia Law School. She received an LLM from Harvard Law School, and a JD and BA from the University of the Philippines.