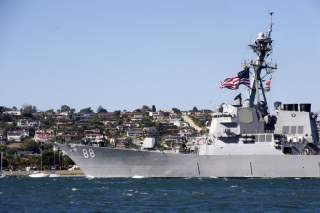 After more than a decade of war, the most significant economic downturn since the Great Depression, and legally mandated defense-spending caps that seem unlikely to be lifted anytime soon, the willingness and ability of the United States to maintain its overseas security commitments are being questioned in some quarters. In fact, calls for Washington to retrench have been growing louder over the past several years, especially among academics and analysts who advocate an alternative grand strategy of “offshore balancing.” Meanwhile, proponents of America’s global leadership role counter that Washington should maintain its existing grand strategy, which Stephen Brooks, John Ikenberry, and William Wohlforth have dubbed “deep engagement.” With sequestration still in effect, and with tensions rising from East Asia to Eastern Europe, this debate is unlikely to fade away.

Despite their differences, offshore balancers and deep engagers tend to agree that American military dominance will remain unchallenged, even if its relative economic strength experiences a significant decline—a situation that the former believe has already occurred but the latter think is still a long way off. Except for occasional calls to preserve air and naval forces with an eye to the Western Pacific, therefore, both sides in the grand-strategy debate downplay the military rise of China. Yet this view highlights a growing gap between theory and policy.

It has becoming increasingly apparent that Beijing’s military modernization—including its adoption of an anti-access/area denial strategy and its acquisition of sophisticated, conventional precision-strike capabilities—has the potential to upend the military balance in its neighborhood. Since the end of the Cold War, the United States has grown accustomed to fighting adversaries that cannot seriously threaten its information networks, its air and naval platforms, or the en route and in-theater infrastructure that it needs to deploy, operate and sustain its expeditionary forces. China, however, is developing the ability to target the satellites, computer systems, airborne surveillance and strike platforms, surface naval forces, and forward bases that underpin U.S. power projection. Although some critics have argued that Washington’s response to these developments has been insufficient, it has nonetheless committed to rebalancing its attention to the Asia-Pacific region and developing an Air-Sea Battle concept for joint operations in contested environments—steps that are due, at least in part, to China’s military rise.

While proponents of offshore balance and deep engagement might concur that China has the greatest potential to challenge the United States over the long run, they don’t see that challenge as a very serious one in the near term. What explains this apparent disconnect? When grand strategists discuss military power, they tend to focus almost exclusively on global power projection, or the ability to conduct large-scale military operations far from a nation’s home territory—something that the United States can do, but others cannot. “Command of the commons,” in Barry Posen’s formulation, differentiates the United States from friends and rivals alike, and is one of the keys to its unique position in the international system. Moreover, that position is unlikely to change. Even if unipolarity wanes in economic terms, the costs of matching the United States’ global military reach are large enough that a peer competitor is unlikely to emerge anytime soon. As a result, both sides of the grand-strategy debate are optimistic that the United States will retain its military edge.

Unfortunately, military reach and military effectiveness are not always synonymous. This is true today in East Asia. Thanks to advances in precision guidance, China can project combat power over significant distances right from its own territory—for instance, by launching highly accurate ballistic- and cruise-missiles attacks against aircraft carriers and air bases located hundreds of miles away. In short, it is developing the ability to take on the United States and counter outside intervention, but without the apparatus of blue-water naval forces, strategic lift assets, and overseas facilities that would undermine Washington’s unique role as a global military power. While the United States is likely to remain dominant in most areas of the world, therefore, and might be able to deploy forces abroad on a scale that no one else can match, the conventional military advantage it enjoys on paper might not translate into an effective deterrent or coercive capability—at least not in East Asia, a region that Washington has identified as its number-one priority.

Because unwarranted optimism can be a barrier to much-needed adaption, the confidence that deep engagers and offshore balancers both evince when it comes to American military power should be treated with skepticism. Despite having very different views on defense policy, though, both sides of the grand-strategy debate should actually be on the same page when it comes to reshaping the U.S. military to manage anti-access/area denial challenges.

For instance, deep engagers believe that the United States should maintain its military strategy of forward defense—meeting threats when and where they materialize—to uphold its overseas security commitments. But forward defense in East Asia will require a greater emphasis on air and naval platforms that are less tied to forward bases and more survivable in nonpermissive environments; forward bases that are more resilient in the face of air and missile attacks; and information networks that are less vulnerable to disruption or destruction. By contrast, offshore balancers prefer a military strategy of delayed defense—pulling back U.S. forces and only intervening abroad when local nations fail to stop revisionist actors—to conserve scarce resources and avoid unnecessary wars. If intervention in East Asia did become necessary, however, the United States would still need to cope with China’s growing military power, and therefore, would still need forces that could deploy abroad despite anti-access threats and operate effectively inside air and maritime denial zones. In short, offshore balancing requires many of the same capabilities that deep engagement and forward defense call for—capabilities that can’t be developed quickly when a crisis breaks out.

Ultimately, while grand strategists will continue to debate issues such as the costs of engagement, the possibility of entrapment and risks of intervention, the future of U.S. military capabilities and posture is one area where they should agree.

Evan Braden Montgomery is a Senior Fellow at the Center for Strategic and Budgetary Assessments. This piece draws on his article “Contested Primacy in the Western Pacific: China’s Rise and the Future of U.S. Power Projection,” in the spring 2014 issue of International Security.