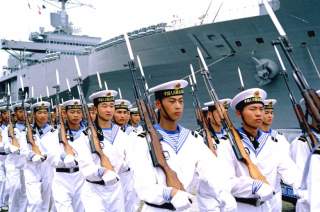 China’s primary strategic goal in contemporary times has been the accumulation of “comprehensive national power.” This pursuit of power in all its dimensions—economic, military, technological and diplomatic—is driven by the conviction that China, a great civilization undone by the hostility of others, could never attain its destiny unless it amassed the power necessary to ward off the hostility of those opposed to this quest.

This vision of strengthening the Chinese state while recovering China’s centrality in international politics—both objectives requiring the accumulation of “comprehensive national power”—suggests that the aims of Beijing’s grand strategy both implicate and transcend the United States’ and China’s other Asian rivals, to replace U.S. primacy in Asia writ large. For China, which is simultaneously an ancient civilization and a modern polity, grand strategic objectives are not simply about desirable rank orderings in international politics but rather about fundamental conceptions of order.

Because the acquisition of comprehensive national power is meant to both increase the Chinese state’s control over its society and maximize the country’s overall capabilities relative to its foreign competitors, Beijing has consistently pursued four specific operational aims since the revolution—though the instruments used to achieve these ends have varied over time.

The first and most important aim pursued by China’s leaders since the founding of the modern Chinese state has been the preservation of internal order and the domination of the Chinese Communist Party.

The external advantages arising from China’s high growth rates thus far have strengthened its capacity to achieve the third operational aim deriving from its quest for comprehensive national power: the pacification of its extended geographic periphery. Beijing has sought to accomplish this by deepening economic ties with its Asian neighbors to “reduce regional anxieties” about China’s rise; making common cause with some states, such as Russia, that have reasons to resist joining the larger balancing against China now under way in Asia; embarking on a concerted modernization of the PLA; and renewing older efforts to delegitimize the U.S. alliance system in Asia.

The CCP’s desire to preserve domestic control is enhanced by the final element of the strategic goal of maximizing comprehensive national power: enhancing China’s status as a central actor in the international system.

The fundamental conclusion for the United States, therefore, is that China does not see its interests served by becoming just another “trading state,” no matter how constructive an outcome that might be for resolving the larger tensions between its economic and geopolitical strategies. Instead, China will continue along the path to becoming a conventional great power with the full panoply of political and military capabilities, all oriented toward realizing the goal of recovering from the United States the primacy it once enjoyed in Asia as a prelude to exerting global influence in the future.

Xi Jinping has fundamentally changed the systems of Chinese governance. Under the preceding model, previous generations of Chinese leaders since Deng Xiaoping created a structure that embedded leadership and decision-making within a collective system of checks and balances that spanned a variety of bureaucratic institutions and included a substantial number of party elites. These bureaucratic procedures and prerogatives no longer function as before. Xi has introduced a new system by limiting collective leadership and marginalizing the traditional institutions of governance, relying instead on a small coterie of close advisors and an array of parallel structures to control policymaking. With respect to foreign policy, Xi has reduced the role of the State Council, Foreign Ministry and military in important decisions, giving him greater freedom from governmental machinery and the political and bureaucratic opponents that can influence Chinese foreign policy.

Because of Xi’s unprecedented power and influence, Chinese policy will increasingly be determined by his background and biases—and therefore will be significantly more unpredictable. The son of a revolutionary who fought alongside Mao, Xi reportedly sees himself and his fellow “princelings” as tasked with rescuing and reviving the Communist Party, to which he is dedicated. His dedication to the Party shapes his views on what he perceives as two of the largest threats to its longevity: corruption and liberalism.

What sets Xi’s foreign policy apart the most is his willingness to use every instrument of statecraft, from military assets to geoeconomic intimidation, as well as explicit economic rewards, to pursue his various geopolitical objectives. In general, Xi’s policy has been characterized by bullying over territorial issues and selective beneficence on economic matters, with the looming application of geoeconomic coercion ever present. A third of my new book on geoeconomics analyzes China’s use of economic instruments for geopolitical purposes.

This approach has been clearest in China’s relations with Southeast Asian states, many of which are embroiled in a simmering territorial dispute with Beijing over the South China Sea. Beijing’s hardening position on these territorial disputes has been accompanied by generous investment and trade packages to Southeast Asian states, and these too appear to be coordinated centrally to geopolitical ends.

A mixture of hard and soft policies has likewise characterized China’s relations with India. During Xi’s first visit to India, Chinese troops launched one of their largest incursions ever into disputed territory with India. China has sought to use the border to keep India off balance and reduce its maritime military investments, which is at least one reason Beijing has been unwilling to delineate the Line of Actual Control (LAC) despite Indian Prime Minister Narendra Modi’s public request that the two countries do so.

With respect to Japan, China has pursued a tough and nationalistic policy. Under Xi, China has dramatically escalated its territorial dispute with Japan through its declaration of an Air Defense Identification Zone (ADIZ) in the East China Sea.

Aside from developing stronger ties with other states, an important element of Xi’s multifaceted strategy has been to energetically create and participate in multilateral institutions. Some of these, such as AIIB, will be useful for dispensing geoeconomically oriented loans to neighbors. The misguided refusal of the United States to participate in the AIIB’s creation, and Washington’s failed attempt to persuade friends and allies not to join, denied the United States an opportunity to influence the bank’s rules, development trajectory and China’s potential use of the bank as a geopolitical instrument.

Diplomacy After the Downturn

Economic growth and nationalism have for decades been the two founts of legitimacy for the Communist Party, and as the former wanes, Xi will likely rely increasingly on the latter. As a powerful but exposed leader, Xi will tap into this potent nationalist vein through foreign policy, burnishing his nationalist credentials and securing his domestic position from elite and popular criticism, all while pursuing various Chinese national interests.

In the future, Xi could become more hostile to the West, using it as a foil to boost his approval ratings the way Putin has in Russia. Already, major Chinese newspapers are running articles blaming the country’s economic slump on efforts undertaken by insidious “foreign forces” that seek to sabotage the country’s rise.

On territorial matters, Xi will be unwilling or unable to make concessions that could harm his domestic position, and may even seek to escalate territorial disputes against Japan or South China Sea claimants as a way of redirecting domestic attention away from the economic situation and burnishing his nationalist record.

Globally, in order to demonstrate at home that China is taken seriously abroad, Xi will maintain a proactive and assertive Chinese foreign policy that involves institution-building and occasional provocation, while remaining firm in the face of external pressure on the South and East China Seas, human rights, conditions in Tibet and Xinjiang, and diplomatic visits by the Dalai Lama.

Finally, Xi’s resistance to Western culture and values may intensify. Because China’s economy is now slowing, Xi’s fear of political instability may push him to adopt even sterner measures, and new violations of human rights and the emerging challenges that Western NGOs and businesses face will likely cause renewed friction in China’s relationships with the West.

Although Washington seeks a cooperative relationship with Beijing on nonproliferation, energy security and the international economy and environment, the primary U.S. preoccupation regarding American vital national interests should be a rising China’s systematic effort to fundamentally alter the balance of power in Asia, diminish the vitality of the U.S.-Asian alliance system, and ultimately displace the United States as the Asian leader. As noted earlier, Beijing seeks to achieve these goals:

-replace the United States as the primary power in Asia;

-undermine the confidence of Asian nations in U.S. credibility, reliability, and staying power;