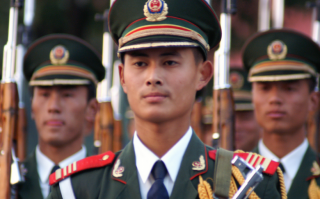 Mao Zedong, as he made his desperate escape from the Nationalist forces of Chiang Kai-shek during the Long March in the 1930s, brought only one book with him, Michael Pillsbury reports in The Hundred-Year Marathon: China’s Secret Strategy to Replace America as the Global Superpower. It was a “statecraft manual” with lessons, stories, strategies and maxims from as far back as 4000 BC.

“Chinese strategy is, at its core, a product of lessons derived from the Warring States period,” writes Pillsbury. As the Pentagon insider tells us, Beijing’s approach to the world was set more than two millennia ago, when “China” as a unified state did not yet exist.

There is a sense today that the Chinese are the maestros of statecraft, long-term thinkers and masters of the arts of both diplomacy and war. But is it true, as Pillsbury suggests, that China’s strategists think in longer time frames than those from other societies—decades instead of years, centuries instead of decades—or more effectively than others? The answer is probably “no.”

Much rides on this question. At the heart of his important new work, Michael Pillsbury refers to a warning from military officer Liu Mingfu in The China Dream. “China’s grand goal in the 21st century,” wrote Liu, “is to become the world’s No. 1 power.”

Specifically, Pillsbury contends China’s “hawks,” the ying pai, have been urging Chinese leaders from Mao “to avenge a century of humiliation” by replacing America “as the economic, military, and political leader of the world by the year 2049,” the centennial of the establishment of the People’s Republic of China. “This plan became known as ‘the Hundred-Year Marathon,’ ” and it has in fact “been implemented by the Communist Party leadership from the beginning of its relationship with the United States.”

Pillsbury is undoubtedly correct that Chinese leaders do not wish to accept the international system as it is, and he is probably right to think they would like to dominate the world to the exclusion of the United States. After all, as he notes, the book Mao carried on the Long March included this maxim, thought to be from Confucius: “There cannot be two suns in the sky.” Chinese strategists, as Pillsbury contends, see the world as having a hierarchy with a sole ruler at its apex.

Pillsbury, in the most important portion of his book, tells American policy makers that Beijing’s aims are not benign and that hawks, now “mainstream,” dominate decision making. Hundred-Year Marathon looks at the critical issues of who is in fact making policy in the Chinese capital and, as a result, it will be read, analyzed and debated for years. Think of Pillsbury as our time’s Paul Revere.

One could disagree with Pillsbury, however, on the notion that whatever is fundamentally different about China’s statecraft from that of other nations is significant, having a direct effect on policy.

There is no shortage of China analysts who, although they may not subscribe to Pillsbury’s thesis, perpetuate the idea that millennia-old notions underpin the Chinese policies of today.

Take Henry Kissinger. He began On China, his 2011 work, with Mao instructing his commanders in the 1962 border war with India with the lessons from the previous conflicts with that country—one 1,300 years earlier and the other only six hundred years before.

“In no other country,” Kissinger writes, “is it conceivable that a modern leader would initiate a major national undertaking by invoking strategic principles from a millennium-old event—nor that he could confidently expect his colleagues to understand the significance of his allusions.”

Kissinger’s conclusion? “No other country can claim so long a continuous civilization, or such an intimate link to its ancient past and classical principles of strategy and statesmanship.”

In Pillsbury’s telling, the United States is at a disadvantage because Americans do not know about shi, the “heart of Chinese strategy.” Difficult to translate, shi is “the alignment of forces” or “propensity of things to happen.” Like the Force from Star Wars, shi, if properly mastered, gives its possessor a decisive advantage. “It is exactly the lack of recognition of the potential exploitation of shi that is dooming American strategy toward China,” Hundred-Year Marathon contends.

American policy makers should certainly inform themselves of these Chinese concepts, as Pillsbury recommends, and he does an excellent job explaining their context in Chinese thought, but possession of a millennia of history does not seem to confer on Beijing a material advantage today. Consider one of the most discussed Chinese stratagems, encirclement.

Kissinger in On China discusses wei qi, the ancient board game where the goal is to surround the opponent. So does Pillsbury, and between the two of them we learn how the ancient Chinese plotted to overcome adversaries.

Yet what are the masters of wei qi doing at this moment? They have been busy surrounding themselves with enemies, opponents and adversaries on two sides, their south and east, in an arc from India to South Korea. A provocative—and sometimes belligerent—Beijing has managed to convert eager friends to wary neighbors and outright opponents. In Asia, questions about China have turned into doubts that have become fears.

And in America, policy makers are shifting to a far more critical approach, which could eventually become as significant as the transformation resulting from Nixon’s outreach to China in the early 1970s. All this, of course, is happening without a great grasp in Washington of shi, wei qi, or obscure Chinese concepts from 475 BC.

This is not to say the Chinese do not have long-term foreign-policy goals, but although they can delight us with stories from the Spring and Autumn Period, they are not adept at applying their lessons in consistent, century-long policies that work to China’s benefit.

After all, in recent years Chinese policy has been, from all accounts, inconsistent, heavy-handed and clumsy. Also counterproductive. These days, Beijing seems it is aggressively determined to pursue self-marginalizing, self-containing and ultimately self-defeating policies. And so China has in recent months suffered one setback after another around its periphery—for example, in Taiwan, Sri Lanka, North Korea, Burma, Vietnam and India.