China’s Support for North Korea Kills Any Chance of Unification 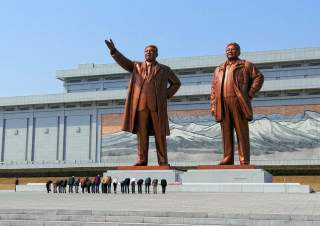 Robert Manning and James Przystup have written a thoughtful rebuttal to an story I wrote for the National Interest. There I suggested that the neutralization of a unified Korea could entice China to abandon North Korea. This built on a similar suggestion by Michael Swaine earlier this spring. I thank Harry Kazianis, executive editor of the National Interest, for allowing me to reply.

Manning and Pryzstup argue that Swaine and I would cut Koreans out of their own vital debate on unification and leave them to the “tender mercies” of China, which has often mistreated Korea in the past. I concur that Chinese intervention in Korean unification is unfortunate. I also believe, however, that it is an insurmountable roadblock to unity. Therefore, to peremptorily reject a Chinese role is, de facto, to tolerate the semi-permanent division of Korea and, more importantly, the continuing moral catastrophe of North Korean human-rights atrocities. If mild Chinese concessions are the price we must pay to extinguish the world’s worst human-rights abuser, a tyranny worse than 1984, and a global public menace, which threatens the use and proliferation of nuclear weapons, trafficks drugs and people, and feels no concern about using weapons of mass destruction in an airport, then that is a price we should at least consider. Our foremost goal should be the elimination of North Korea as soon as possible, and if dashing hopes of a wholly unconstrained Southern-led unification process is the price of that, then the benefits still far outweigh the costs.

The argument for post-unification “Finlandization” builds on three basic observations:

It is increasingly clear that the choice facing us is not over the happy details of South Korean-led unification, but whether unification will occur at all. The Korean unification game, as I argued in the previous essay, is not as forthcoming to the democracies as the German one. North Korea is not about to collapse, and its patron is not about to cut it off the way the Soviets did with East Germany. Indeed, China’s ability to prop-up North Korea is expanding, not declining, given its explosive economic growth. Chinese assistance and the willingness of North Korea’s elite to do anything to stay in power, including allowing 10 percent of its population to starve to death in the late 1990s, means that North Korea could hang on for a few more decades, unless we deal with China.

To formalize this, our ranked preferences are:

3. An indefinite continuation of the status quo.

I believe almost every democratic analyst—American or Korean, and including Swaine, Manning, Przystup and myself—prefers the first option. The unification discussion in South Korea, especially on the right and in the nationalist press, often frames the debate as either option one or two. If those were the only two options, then one would obviously be the superior option. Unfortunately, the reality is that the choice is increasingly between option two and three—accepting some Chinese role in unification or no unification.

In the 1990s, North Korea seemed to be on the verge of implosion. Many people thought option one would occur whether China liked it or not because they believed North Korea would simply collapse in pieces into South Korea’s backyard. Just as the Velvet Revolutions and Arab Spring brought down other autocracies, we instinctively feel that North Korea, the “Impossible State,” is somehow living on borrowed time and will one day collapse. A unified Korea could then be a fully sovereign actor, deciding with whom to align as it pleases, regardless of Chinese opinion.

It is time to admit that we are probably wrong, that North Korea is hanging on no matter how often we predict its failure. Kim Jong-un has prioritized economic growth. North Korea has weathered extraordinary crises and survived. China continues to prop it up. If we accept this northern persistence, then dealing with China—offering them something in exchange for cutting off North Korea—is the evident route forward. Obviously, the less China will take the better. If China could be talked into accepting U.S. Forces Korea (USFK) post-unification, so much the better. But the point is that the Chinese umbilical cord is almost certainly what allows North Korea to escape its “Impossible State” contradictions. Bargaining to cut that umbilical cord is the most likely way to push North Korea into the long-expected (and hoped for) internal crisis that would bring about its collapse. China will want something for that push.

I find this as distasteful as anyone else, but China has made it very clear that an American-allied united Korea is the major objection to its acceptance of unification. Beijing sees North Korea as a buffer between it and the robust democracies of South Korea, Japan and the United States. North Korean shenanigans also distract the Americans from the brewing conflict in the South China Sea. If we categorically ignore this Chinese position, the practical effect is to prolong North Korea’s existence.

China Has a Veto over Korean Unification

Beijing is exercising its unification veto right now by propping up North Korea. This, too, is deeply distasteful. Ideally, unification should be a Korean-only affair. But reality has a way of intruding on our preferences, and here that means that China is almost certainly not going to cut off North Korea or enforce the sanctions without some kind of assurance that a united Korea would not let USFK move north to the border.

Korean nationalists hate this argument. I hear all the time when I discuss this in South Korea. They say that this sacrifices, uses, manipulates Korea and so on. And indeed, it is appalling that China chooses to instrumentalize another country as a political card to be played, especially one as hideous as North Korea. It is to the everlasting shame of the Chinese Communist Party (CCP) that it prioritizes a mild gain in security (keeping the United States away from the border) at the expense of leaving millions of people to be brutalized for decades. If any one Chinese foreign-policy behavior should scare the rest of the world about incipient Chinese superpowerdom, it is this: for two decades the Chinese have empowered the world’s most appalling human-rights violators for minimal, parochial ends. This is callous beyond belief and should embarrass Chinese people everywhere. But reality, again, tells us that the CCP just does not care. It is unfeeling and heartless about the enslavement and torture of the North Korean population, and there is little we can do about that. This insouciance over North Korea’s brutalization—China’s refusal to pull the plug no matter how bad Pyongyang gets—is what gives China a de facto veto over unification. Beijing is not going to dump North Korea because it is awful. If so, it would have done so already. It will only trade Pyongyang away for concessions.

China’s Demands Are Not Actually That Intolerable

It would be ideal to go around China altogether, but the costs are not really that high given the huge benefit of North Korea’s collapse. A cessation of the U.S.-Korea alliance after unification, were that an implacable Chinese demand, is hardly the loss it would be now, as the whole point of the alliance is defense against a North Korea which would not longer exist. A unified Korea would also not be defenseless against Chinese depredation; like Switzerland, a unified Korea could heavily arm to protect itself. It might even be able to keep North Korea’s nuclear weapons. Contrary to Manning and Przystup’s assertion, China does not actually have a long history of mistreating Korea. Also, contemporary Korea worries far more about Japan than China, so giving up an opportunity to align against China is hardly a concession at all. Finally, China’s insistence on Korean nonalignment would likely weaken over time as a unified Korea proved itself a peaceable neighbor. This, too, is hardly a concession, as unified Korea would be a liberal democracy likely to pursue a peaceful foreign policy anyway, nor does anyone really think Korea intends to attack China. After a decade or two of peaceful relations, likely characterized by heavy trade flows and Korean corporate investment in northeastern China, it is easy to envision Beijing slowly accepting full Korean alliance sovereignty.

This analysis is indeed disappointing. Most democratic analysts share the national desire of Koreans for unity and full sovereignty. But the geopolitical comfort of South Korean elites is far less important than the final destruction of the vicious Kimist tyranny. A “Finland” solution should not, of course, be pursued against Seoul’s wishes; South Korea must lead and retain a veto over strategy toward the North. But the “satisficing” option two is far more likely to happen than the maximalist, ideal option one, no matter how much we dislike that admission. Blame the CCP for that.