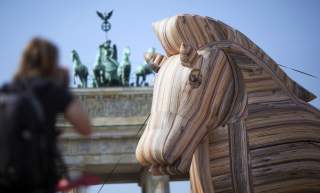 The Trojan Kingdom of Priam fell to the Greeks thanks to one of the earliest known stratagems in world history—the Trojan Horse. Trojan warriors were unable to put up a successful fight once the Greek soldiers in the belly of a great wooden horse surprised them within their own city walls and then flung open the gates to their waiting compatriots. A diplomatic analog to this classic story could well be about to play out far away from the epic battlefield of Achilles and Hector—the Korean Peninsula.

Kim Jong-un, the young leader of North Korea, just completed a trip to Beijing to discuss a variety of matters with the newly ensconced “Emperor for life,” Xi Jinping. Soothing statements were subsequently issued that denuclearization of the Korean Peninsula was a very real possibility—so long as the United States acted in a “peaceful” way.

While this might appear to be a tempting opportunity for President Trump, who is very interested in the “big deal,” he should be wary of these statements and of the Chinese diplomatic efforts that led to them. There is a very real possibility that such Chinese diplomacy is less about the full denuclearization of the Korean Peninsula than it is about damaging the U.S. position in East Asia. What better way to do this than through the diplomatic equivalent of a Trojan Horse, in this case the Hermit Kingdom?

It has been some time since China and North Korea have had an alliance as close as “teeth and lips,” but they remain close enough that China can diplomatically use North Korea as a way to keep America and its Asian allies off balance while it continues to gather economic and military strength. With a greatly diminished American position in the region, China could then use that economic and military power at a time and place more propitious to China’s interests in becoming the arbiter of the region.

As many analysts have pointed out, Kim Jong-un’s recent statements that he would consider denuclearization actually echo past comments and diplomatic gambits from his father. This raises the question of what exactly it is that Kim Jong-un would demand in order to even begin embarking on a set of policies where the regime in Pyongyang would give up their nuclear program. Certainly, recent lessons such as those of Libya’s Colonel Qaddafi, would seem to illustrate that giving up one’s weapons could be an open invitation to regime change, and death. Thus, it seems unlikely that this would seriously be put on the table without the guarantee of a massive concession by the United States.

In the past the concessions sought by North Korea involved America almost unilaterally relinquishing its presence on the peninsula while stopping future training exercises with Seoul. These are obvious nonstarters for the United States.

Even if North Korea could be trusted to begin dismantling its nuclear weapons and missile programs, which is highly unlikely, the cost to U.S. credibility due to disengagement would be severe. Such a pull back would irredeemably undermine any trust that Asian nations, from Japan to Vietnam, have in any American commitments. That would then open the door to any future aggressive moves by China in the South and East China Seas. Without an American counterweight, such moves would inch ever closer to fait accompli after fait accompli favoring Chinese positions throughout the region.

By contrast, if the United States rightly dismisses these proposals, the Chinese have also been given a fresh new diplomatic weapon to wield against the American position in Asia.

China could then argue to America’s allies, more plausibly than ever, that the United States is the aggressive power in the region and that it is led by potential warmongers who have no desire for a peaceful resolution to the North Korean nuclear conundrum despite being given a golden opportunity. This could be used to continue to drive a wedge between the United States and South Korea. In turn, that wedge could become a lever to work on eventually forcing the United States out of the Korean Peninsula in the long run anyway by playing on South Korean fears and Chinese assurances. Ultimately, even if this takes longer, it would accomplish largely the same outcome as an early and quick disengagement deal with North Korea.

Either way, the “diplomatic gifts” of China relative to North Korea are likely to be quite dangerous to American interests once their full implications are unleashed. Much like the Greek soldiers in Troy who snuck into the citadel of Trojan power, the clever diplomatic tactics of China attack the American position from the inside out.

Dexterous American diplomacy, however, can avoid these unpalatable outcomes. Rather than focusing on the nuclear issue, the United States should seek normalization of North Korean relations. This could even be a prelude to a peace treaty that would finally bring official closure to the Korean War.

While this might, at first, be seen as rank appeasement, it would give America a chance to peel North Korea away from China’s embrace and would switch the diplomatic momentum away from China and back towards the United States and its regional friends.

President Trump and his newly minted national-security tandem of Secretary of State Mike Pompeo and National Security Advisor, John Bolton, should tread carefully with North Korea. There is far more at play than North Korea’s nuclear ambitions at stake. Allowing Xi Jinping to act as a modern day Odysseus is not in American national interests, nor the interests of the other Asian regional powers.

However, clever American diplomacy, in the mold of President Nixon and his National Security Advisor, Henry Kissinger, could allow America to assume the mantle of that wily strategist from ancient Ithaca.

Greg R. Lawson is a contributing analyst at Wikistrat.