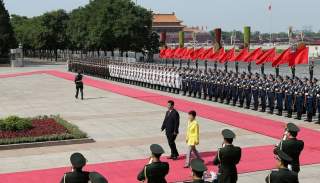 Chinese President Xi Jinping's recent trip to South Korea was a crucial event that has not received all of the attention it deserves. Two major motives for that trip are apparent. One was to send Pyongyang a message that North Korea will pay a price for its continued defiance of China’s objections to missile and nuclear tests. Both Kim Jong-un and his father ignored Beijing’s repeated admonitions not to undertake such provocative actions. The Chinese government’s irritation at its long-time ally has been building for some time, and Xi’s decision to snub Pyongyang by not even bothering to visit the North Korean capital before or after his trip to Seoul demonstrated that the annoyance has reached new heights.

But the trip advanced another, ultimately more important, goal of the Chinese government. It was a concerted effort to woo South Korea at the expense of both Japan and the United States. During his stay in Seoul, Xi missed no opportunity to remind South Korean officials and the public about Japan’s war crimes during the 1930s and 1940s. He also shrewdly framed that indictment to focus on Tokyo’s brutal treatment of both the Korean and Chinese people, implicitly linking the fates of the two victims.

That criticism served as the foundation for the argument that Japan cannot be trusted to play a larger military role in East Asia. The timing of Xi’s ploy was no accident. It coincided with the decision by Japanese Prime Minister Shinzo Abe’s government to “re-interpret” Article 9 of Japan’s constitution so that the country can participate in collective-defense missions and no longer be restricted to direct national self-defense.

Beijing is understandably unhappy about that move. Indeed, Chinese governments have objected strenuously to liberalized interpretations of Article 9 in earlier decades that enabled Japan to build a technologically sophisticated military under the euphemism of “Self-Defense Forces.” If Beijing had its way, Japan would not be allowed anything other than lightly armed national police units.

Washington’s efforts in recent years to not only strengthen its own bilateral military ties with Tokyo and Seoul, but to prod those capitals to increase their cooperation with each other, have increased China’s incentive to pursue countermeasures. The last thing that Beijing wants to see is a coordinated, trilateral alliance in Northeast Asia aimed at containing China’s power and influence. Chinese leaders are already suspicious and annoyed at Washington’s increasingly unsubtle backing of nations in Southeast Asia regarding their territorial disputes with China in the South China Sea. Northeast Asia may be an even more important arena for Chinese strategic and economic interests.

Beijing, therefore, has a powerful incentive to strengthen its relations with Seoul and try to drive a wedge between South Korea and Japan. If successful, that move would disrupt any U.S. ambitions to establish a containment policy against China in Northeast Asia. And Beijing perceives a good environment to pursue a wedge strategy. Japan’s behavior toward South Korea, especially under Abe’s government, has been clumsy and provocative.

The main source of tension is the apparent insensitivity of Japanese leaders (and much of the public) toward the unhealed emotional wounds of Koreans regarding the conduct of Imperial Japan during the twentieth century. Prominent Japanese periodically exacerbate matters by making ill-considered statements about that period. Some political figures even try to whitewash the issue of World War II “comfort women” (young, mostly Korean women that the Japanese military pressed into sexual slavery), implying that most of them had been willing prostitutes. Equally disturbing have been the periodic visits and offerings by prominent Japanese officials, including Prime Minister Abe, to the controversial Yasukuni Shrine in Tokyo. That site honors the memory of fourteen prominent war criminals (as well as many lesser offenders) from the World War II era. Abe’s pilgrimages dismay populations throughout East Asia, but they are especially resented in South Korea and China.

In January 2014 in the New York Times, Sung-Yoon Lee, Professor of Korean Studies at Tufts University’s Fletcher School of Law and Diplomacy, noted that even before Abe’s December 2013 visit to Yasukuni, South Korea had rebuffed Japan regarding closer security ties because of other provocative historical slights. “To Washington’s dismay, Mr. Abe’s disregard for Koreans’ sense of the trauma about the Japanese occupation has given South Korea’s president, Park Geun-hye, no option but to cool relations” even further. Ties between Tokyo and Seoul have improved just marginally since then.

China has designed its policies well to exploit South Korean suspicions and resentments against Japan. If Xi’s courtship of Seoul progresses, it will put the United States in an awkward position. The goal of forming a solid allied front against China’s sometimes-abrasive behavior in East Asia would become little more than a pipe dream if South Korean anger at Japan becomes more intense. Such bilateral tensions could even lead to a potentially dangerous situation. Largely lost in all of the media coverage of the volatile dispute between China and Japan over the Diaoyu/Senkaku island chain is the existence of a nasty, territorial dispute between South Korea and Japan. That feud involves small islands (called Dokdo in Korea and Takeshima in Japan) that Seoul claims and occupies, much to Tokyo’s resentment.

Although an armed conflict over the issue remains unlikely, it is a source of raw nationalist emotions in both countries and could further poison bilateral relations. President Obama has already deemed it necessary to take steps, including brokering talks between Park and Abe at a three-way summit in late March, in a bid to ease Japanese-South Korean animosity over the territorial dispute and other matters. The Dokdo/Takeshima controversy is not an issue on which the United States wishes to take sides, but the pressure to do so is growing. Earlier this year, Secretary of State John Kerry created a furor when he inadvertently appeared to back Seoul’s position, implying that the islands were covered under the U.S.-South Korean mutual defense treaty.

Beijing is certainly aware of the various sources of tension between Washington’s two main allies in the region. Xi’s performance in Seoul demonstrates that China is making some skillful moves on the Northeast Asian chessboard to exploit that situation.

Ted Galen Carpenter, a senior fellow at the Cato Institute and a contributing editor at The National Interest, is the author of nine books and more than 550 articles and policy studies on international issues.