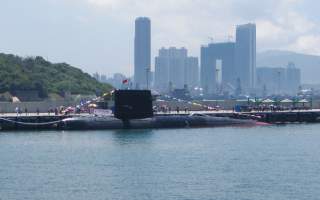 As defense analysts brood over the evolving military balance in the western Pacific, considerations related to undersea warfare keep coming to the fore. Given the lethality of modern antiship cruise missiles, surface combatants of all types may well be scarce on the future naval battlefield. Moreover, precision strikes on airbases (and the inherent vulnerability of aircraft carriers) suggest that aerial platforms could additionally be rather sparse during the first few critical weeks of any military conflict that breaks out in the Asia-Pacific region. That leaves submarines (assisted by undersea robots) to decide the epic battle.

Western strategists have been reasonably comfortable with this conclusion, safe in the knowledge that Washington possesses a very considerable undersea advantage over Beijing. That advantage includes acoustic superiority, larger and more capable boats, and a wealth of experience both in operating submarines and in developing undersea warfare-technology innovations. However, this column has occasionally drawn attention to caveats in the assumption of U.S. undersea superiority, including China’s robust mine-warfare posture, its broad front effort to improve its antisubmarine capabilities, as well as possible attempts to experiment with alternative submarine doctrines. That is not to even mention the fact that the U.S. Navy fleet of nuclear attack submarines is now declining to a perilous low of just forty-one boats by 2029—a “valley” in U.S. naval capabilities that is widely noted in Chinese military sources.

This edition of Dragon Eye seeks to sketch out the undersea warfare competition in the western Pacific in slightly greater detail, by discussing a new Chinese-language article about China’s new “undersea Great Wall” (水下长城) that appeared in a late 2015 edition of China Ocean News (中国海洋报). The article presents a rather complete discussion of China’s new “undersea monitoring system” (水下观测系统). Making clear the national-security imperative for developing this system, the article begins with the suggestion that China’s maritime security situation has become “significantly complicated.” In particular, it is pointed out that in the undersea domain, China’s “doors have been left wide open” (门户洞开). China’s methods for tracking undersea targets are said to have been “weak.”

Nevertheless, it is worth pointing out that the article does not rely on the military rationale alone to justify this ambitious research and development enterprise. A paragraph is devoted to the many nonmilitary applications of such a system, that include providing advanced warning of natural disasters, such as typhoons, earthquakes and tsunamis. Thus, the undersea monitoring system is explained as an important way to “reduce social and economic costs” to China’s massive coastal population. Another rationale offered for the system is that all the other major maritime powers are involved in similar research projects, including Canada, the United States, Japan and the European Union. These systems under development by other countries have civilian research objectives “and at the same time have military goals too” (同时用于军事目的).

According to this rendering, the undersea observation system is intended to rectify three lingering gaps. First, Beijing’s lack of ability to monitor targets in the undersea domain is not commensurate with its status as a great power. Nor is it commensurate with “the growing strategic threat” (战略威胁的增长严重). Finally, China’s longtime substandard capability for undersea observation is said to be out of sync with Beijing’s naval surface and subsurface combat capabilities.

This account relates that the first elements of a Chinese undersea observation system went into the water in 2010. Other reports I have analyzed suggest the initial setup was near China’s North Sea Fleet headquarters at Qingdao. A second installation occurred off of Hainan Island in 2011 and part of the system went into operation for testing in May 2013 near the Sanya nuclear submarine base. Two other projects were also mentioned, including one near Shanghai at Yangshan, as well as one managed by Zhejiang University at Zhairuoshan Island. The latter system was deployed in August 2013, according to this article.

It is emphatically stated, moreover, that China’s ambitions for its undersea observation system cannot be restricted to its coastal waters, but rather may be appropriate to deploy into all ocean areas touching Chinese national interests. Therefore, the systems may be put into place in “the near seas, the depths of the far seas, and around islands bordering the far seas, as well as in strategic passages and such areas” (对近海, 深远海, 边远海岛, 战略通道等区域). More than once in the article, the author compares this endeavor to a space project in terms of complexity and difficulty. Indeed, a definite concern is voiced in the article concerning poor coordination among different ministries, capabilities that are too decentralized, duplicative efforts and wasted resources. Notably, the author calls for developing a “strict system of secrecy” for the project.

The above developments should serve as a warning that Beijing is not simply willing to yield to American undersea dominance. The recent RAND “Scorecard” report on the evolving military balance in the western Pacific does actually attempt to model certain aspects of a hypothetical undersea-warfare battle. For example, an evaluation of U.S. submarines operating against a Chinese amphibious force invading Taiwan yields the conclusion that growing Chinese ASW forces might kill 1.82 U.S. submarines per week of the campaign (p. 213). If the campaign lasted two weeks, therefore, the U.S. Navy could presumably expect to lose approximately three to four submarines.

But this conclusion, entailing very significant U.S. losses, could actually be too rosy. Bathymetry (water depth) would mean very shallow and tight spaces for comparatively larger U.S. submarines. China could employ unconventional platforms like coast guard vessels or even fishing boats to patrol adversaries’ submarine operating areas and report on periscope sightings and missile launches. In creating such a low-tech ASW targeting system, the Chinese would know well that such nonmilitary vessels would not be worth the expenditure of even a single precious American torpedo since submarines are well known to have comparatively limited magazines, nor any easy solution for resupply.

What is most troubling about the RAND study is that it does not seriously grapple with the problem of sea mines and their likely employment against U.S. submarines. Ten of fifty-two U.S. submarines lost in the Pacific War were likely destroyed by sea mines. It is well known, moreover, that China has deployed and continues to work diligently on ASW-optimized sea mines. The undersea observation system discussed above presents yet another challenge to U.S. undersea superiority that did not figure into the RAND estimate of losses.

True, these waters may be so shallow and noisy as to limit the value of these new undersea sensors for Beijing. But Chinese scientists are hard at work trying to master the principles of shallow-water acoustics, and such breakthroughs cannot be ruled out.