China's War against International Law in the South China Sea 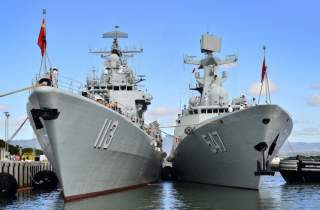 In medieval times, alchemists sought to transmute base metals into gold. Today, the People’s Republic of China (PRC) is engaged in the geopolitical equivalent of alchemy in the South China Sea, as it seeks to transform reefs into islands. The Pentagon’s annual report on Chinese military capabilities notes that, for the last year, China has been reclaiming land at five of the reefs under its control in the South China Sea. The PRC is already building major infrastructure on four of these artificial islands. At least two of them—Fiery Cross Reef and Subi Reef—are getting airstrips.

Beijing views these actions as “lawful and justified,” since they are occurring on Chinese territory. As the Chinese Foreign Minister Wang Yi emphasized at the National People’s Congress earlier this year, China is building on “its own islands and reefs.” As important, China characterizes these actions are “necessary.” That assertion is likely rooted, in part, in the fact that none of China’s claimed features have an airstrip, unlike almost all of the other claimants’, including Taiwan’s Itu Aba, Malaysia’s Swallow Reef (where Kuala Lumpur has also reclaimed land), Vietnam’s Southwest Cay, and the Philippines’ Pagasa island.

But China’s decision to build islands (habitable territory) where there had previously been only rocks (an uninhabitable feature that breaks the surface) and reefs (submerged features that did not break the surface) is also an attempt to alter facts on the ground (or in the water). As such, it challenges an array of international laws. In particular, it is an attempt to create new features (islands) that would project both territorial waters (with a twelve nautical mile limit) and exclusive economic zones (EEZs) extending 200 nautical miles. Rocks extend only twelve nautical mile territorial waters, and reefs project nothing.

These Chinese actions, moreover, occur in the midst of longstanding efforts to alter the nature of EEZs, from international waters where the owning state has primacy over natural resources, to essentially territorial waters through which other states might be able to pass freely. China has tried to press its arguments in this regard through both legal warfare (also known as “lawfare”) and physical obstructionism—such as the interference with the USNS Impeccable and the USNS Victorious (among other vessels) in 2009. In short, China is undertaking a basic challenge to the nature of the land features at sea and to freedom of navigation.

To counter China’s efforts, Washington is certainly considering new ways to deal with Beijing’s challenge. Options include overflights of the man-made islands, and dispatching U.S. Navy ships to within 12 nautical miles of the reefs, to underscore that no territorial waters extend from these artificial islands. Already, the USS Fort Worth, a new littoral combat ship, has sailed into the waters around the Spratlys; the Chinese have trailed the American vessel with a frigate of their own. The intended American message is clear: China has neither the power nor the right to unilaterally overturn the status quo in the South China Sea, or to rewrite international laws and treaties (or geography).

The American approach is not new. American naval vessels have long undertaken actions to uphold and reinforce freedom of navigation—and not just against the PRC. U.S. Navy vessels, for example, have made “operational assertions” of freedom of navigation in waters claimed by the Philippines and Malaysia. In 1988, it exercised the right of innocent passage through Soviet territorial waters in the Black Sea. Indeed, the Navy’s Judge Advocate General issues the “Maritime Claims Reference Manual,” a guide to the various maritime claims of coastal nations, in order to support the freedom of navigation program.

Nor does Washington’s possible moves change the United States’ stance regarding sovereignty disputes in the region. The United States has consistently refrained from taking any position regarding the various sovereignty claims in the South China Sea. Instead, as then-Secretary of State Clinton announced at the 2010 ASEAN Regional Forum, the United States supports a peaceful resolution of the various territorial disputes, based on claims to maritime space “derived solely from legitimate claims to land features.”

What is new, however, is the specific locale. Past confrontations between the PRC and the United States have tended to be in the northern reaches of the South China Sea. The incidents involving the USNS Impeccable and the USS Cowpens, for example, were all within some 200 nautical miles of Hainan. The Spratlys, by contrast, are more than 500 miles from Hainan and continental China. That some $5.3 trillion in trade passes through the shipping lanes in the South China Sea only underscores the high international stakes that are at risk.

Nonetheless, Chinese leaders are unlikely to back down. This is in part due to the likely genuine belief that the South China Sea has long been Chinese territory. That belief does not justify China’s actions, but it explains how China can see itself as acting defensively, rather than in an aggrandizing fashion.

Similarly, Chinese leaders seem to genuinely believe that the PRC is being judged by a different set of standards. After all, other claimants have also drilled oil wells, reclaimed territory, and built runways (although none have done so on the scale that Beijing is undertaking). Ironically, Beijing has only legitimized such treatment, since it also believes that it should not have to adhere to the same standard as other countries. As then-Foreign Minister Yang Jiechi caustically noted, in rebutting Secretary Clinton’s remarks in 2010, “China is a big country and other countries are small countries, and that is just a fact.” In short, China sees itself as being challenged by neighboring states that do not seem to know their place.

From Beijing’s perspective, America is to blame for their neighbors’ uppity attitudes. When visiting the United States last year, General Fang Fenghui, chief of the Chinese General Staff, said that local states in the South China Sea were being provocative because the “United States is adopting this Asia-Pacific rebalancing strategy.” While Fang did not openly accuse the United States of fomenting trouble, he repeatedly argued that American actions had opened the door to increased tension in the region. This position will likely be further reiterated in the future.

For this reason, it is essential that the United States not only counteract China’s efforts to overturn international law in the South China Sea, but do so with the public support of other regional states. Washington must coordinate its efforts so that local capitals are not caught unaware when Beijing inevitably responds, or worse, see the United States as somehow responsible for escalating tensions.

Washington must stress that it is not the United States that is militarizing the issue. The use of naval vessels could be seen as America escalating the situation by deploying “grey hulls,” when China has largely relied on its substantial array of civilian, law enforcement vessels (“white hulls”) to assert sovereignty. Few of China’s neighbors have much interest in moving the competition into the military arena, especially as China has substantially enlarged and modernized its fleet. Indeed, it might have been preferable for the United States to have deployed Coast Guard cutters to initially challenge Chinese claims.

But Chinese commentators have openly discussed the incorporation of military elements into their reclamation efforts. As the official Chinese news agency Xinhua observed, “for the sake of safeguarding its sovereignty and territorial integrity, China does need self-defense….Those facilities on the islands and reefs, even being of some military nature, are reasonable and justifiable for China to use them for defense purposes.” American responses, therefore, are in-kind, rather than escalatory.

Another central message should be that the United States has not altered its agnosticism regarding specific claims of sovereignty. Insofar as the various claimants remain focused on peaceful resolution of their various disputes, Washington should not take sides. At the same time, though, it should also signal that neither use of force nor physical legerdemain, such as island construction, will lead to creation of a new status quo.

Finally, as with the “little green men” in Ukraine, China’s actions in the South China Sea are a sign that future conflicts and disputes are likely to incorporate a large dose of unconventional approaches. Indeed, China’s actions are consistent with their broader approach to “political warfare,” with clear employment of the “three warfares” of legal warfare, public opinion (media) warfare, and psychological warfare. It would behoove American planners and diplomats to start thinking about how to respond to such unconventional approaches, as well as how to undertake them ourselves.