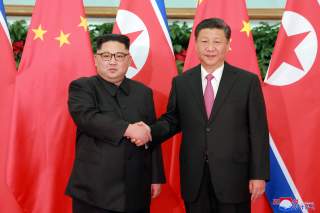 North Korean leader Kim Jong-un made his third visit to China in mid-June. The fact that Kim visited Beijing shortly after the Singapore summit was unsurprising—it was expected that Kim would have to debrief Xi and the two would want to strategize ways forward.

But the predictability of the visit does not diminish its importance. Specifically, the meeting allowed China to establish its influence behind the scenes, shape its image on the global stage, while also solidifying progress in its broader goals for the future of the peninsula and U.S.-China relations.

First, the broader geopolitical competition with the United States was a central consideration for the visit. Xi most likely wanted to clearly signal to the United States that China continues to play the pivotal role in shaping Kim. Chinese media reporting was not subtle on this point—highlighting that China’s dual suspension plan, which consisted of a pause of U.S. military exercise for a freeze in North Korean nuclear testing, was basically adopted in Singapore. According to Chinese media, this demonstrates China’s role as “a responsible great power” and that progress on the Korean nuclear issue “is indeed inseparable from China’s efforts.”

Second, to enhance its image as a regional power, Chinese official statements worked to promote an image of unity with North Korea. The post–meeting statements highlighted that the two sides had a “shared understanding” of a “series of issues of mutual concern including the prospect for the denuclearization of the Korean Peninsula.” Reporting emphasized that even though there were highs and lows due to the nuclear issue, the bilateral relationship was strong, but evolving—and this bilateral relationship would greatly impact the regional environment.

Lastly, China wants to solidify progress towards a reduced U.S. military presence on the peninsula. Along these lines, the United States stopping joint exercises is only the first step. Beijing will likely begin to push for peace treaty talks that would undermine the legitimacy of a continued U.S. presence on the peninsula. China may even push Kim to bring up the U.S. deployment of the THAAD system to South Korea in the next round of talks, which could put the United States in a tough position.

The United States should work to push back on these efforts but, unfortunately, Washington’s primary concern seems to be that China may push for an easing of sanctions against North Korea or Beijing could use its role to improve its position in trade disputes with the United States.

This concern is not unfounded, though China may not push back on the sanctions regime initially or the tariff issue directly. But eventually, China will return to easing the sanctions because Beijing thinks North Korean domestic reform is the only permanent solution to the nuclear issue. North Korean leaders have played into China’s hope that Pyongyang would follow along its path of reform for decades, leaving China disappointed every time. For whatever reason, Chinese experts believe that this time is different, that Kim is “eager to learn how to turn a developing nation into a global superpower.” They point to indicators such as the fact that on this visit, Kim toured the Chinese Academy of Agricultural Sciences and the Beijing Infrastructure Investment Company. If Xi continues to believe that North Korea truly wants to integrate itself diplomatically and economically into Northeast Asia, then it is only a matter of time before China pushes for economic assistance to help Pyongyang reach its goal.

In short, the visit demonstrates that China has been successful at keeping North Korea close and leveraging the relationship to achieve its own overarching goals beyond denuclearization. These goals are not necessarily to the U.S. detriment—if China successfully pushes Kim on the path to reform, then this could like to more freedom and openness in North Korean society as a whole. But if China is wrong again about North Korean intentions, then providing economic assistance could reduce incentives for denuclearization. Moreover, the United States should expect, and be wary of, more Chinese initiatives that call for reduced U.S. military presence and operations on the peninsula.

Oriana Skylar Mastro is an assistant professor of security studies at Georgetown University and Jeane Kirkpatrick Scholar at the American Enterprise Institute (AEI). Her research and commentary can be found on twitter @osmastro and at www.orianaskylarmastro.com.