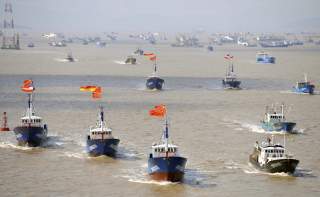 The People’s Liberation Army Navy (PLAN) is not the only element of Chinese sea power plying the world’s great waterways. Today, Chinese oceanographic research vessels routinely operate in strategically important areas of the Indo-Pacific region. From the deck plates of China’s large (and still growing) fleet of survey ships, Chinese scientists are pursuing their research agendas in exotic new places: Madagascar, Micronesia, Benham Rise in the Philippine Sea, the Arabian Sea and the Clarion-Clipperton Fracture Zone in the waters south of Hawaii.

The rapid expansion of China’s out-of-area—or “distant-ocean” (远洋)—oceanographic research operations raises important questions for Indo-Pacific nations. Many places of interest to Chinese oceanographers fall within the two hundred nautical mile exclusive economic zone of other countries. The United Nations Convention on the Law of the Sea (UNCLOS) empowers coastal states to decide whether to allow marine scientific research (MSR) in their exclusive economic zones. Should they approve Chinese MSR? If so, under what conditions? What if Chinese scientists are not doing what they say they are doing? What are the risks of ignorance?

As an Indo-Pacific country and the state with the world’s largest exclusive economic zone, the United States faces these same questions. In recent years, Chinese scientists—and the government agencies that back them—have fixed their gaze on American waters, especially those near the U.S. territory of Guam. This has raised questions about the ability of current policy to adequately protect U.S. interests.

American policy has long been to make the waters of the U.S. exclusive economic zone open and available to the activities of foreign scientists. In many cases, it does not even require a permit or advance notice to undertake MSR. While this policy is admirable for its robust endorsement of maritime freedom, this approach leaves the United States vulnerable to exploitation by the People’s Republic of China (PRC), a strategic competitor with an ocean agenda markedly different from our own.

Chinese distant-ocean MSR directly serves state interests, including security interests. Many of these operations are more akin to “military surveys,” similar to work done by U.S. Navy special mission ships like the USNS Bowditch. While military surveys are not unlawful, the fact that China disguises military surveys in the garb of MSR harms U.S. interests in at least two ways. It confounds America’s ability to accurately gauge the scale and content of Chinese data collection efforts. Moreover, it undermines the U.S. interest in maritime freedom by allowing China to pursue military aims without reciprocating these freedoms to the United States and other nation-states. To counter these harmful effects, Washington should more vigorously assert its coastal state rights under UNCLOS.

In China, marine science is dominated by the state. This is especially true for out-of-area oceanographic research. Until recently, the State Oceanic Administration conducted the vast majority of marine science in distant ocean areas. Earlier this year, most of its responsibilities—including marine science—were transferred to the newly-created Ministry of Natural Resources.

Even research not conducted by the Ministry of Natural Resources is subject to its direction. In 2012, China took steps to combine most of the country’s research vessels into a National Fleet. Today, the fleet comprises fifty ships, half dedicated to out-of-area research. Modeled on America’s University-National Oceanographic Laboratory System (UNOLS), the National Fleet was created to systematize use of existing research platforms and better position the State Oceanic Administration to manage national oceanographic research activities. Aside from State Oceanic Administration ships, China’s National Fleet includes vessels from state-owned oil and gas companies, universities and research institutes like the Chinese Academy of Science. Unlike UNOLS, which comprises scientists from independent universities and research institutes, China’s National Fleet is overseen by a coordination committee headed by a government official.

Other governments, including the United States, heavily subsidize marine science. Indeed, the National Science Foundation and the U.S. Navy Office of Naval Research fund a number of civilian projects. Both own research vessels that are operated by civilian institutes and incorporated into UNOLS. Through its funding decisions, the U.S. government influences the national oceanographic research agenda, doing so with national defense considerations in mind. However, the UNOLS fleet and the civilian scientists that use it are not, as in China, direct extensions of state power, mobilized to achieve defined national strategic objectives.

Beijing primarily invests in out-of-area oceanographic research in order to position China to better compete with other countries for security, resources, markets and political influence. This self-interested spirit pervades many aspects of China’s foreign policy. In marine affairs, it can be traced to the highest levels of the Chinese party-state. In July 2013, the Chinese Communist Party held a Politburo meeting devoted to the topic of transforming China into a “maritime great power” (海洋强国). Rather than centering his remarks on the cooperative spirit of UNCLOS, General Secretary Xi Jinping conjured themes of national struggle against competing states: “Historical experience tells us that countries that embrace the sea prosper, while countries that forsake the sea decline.” Xi also highlighted the “increasing strategic status of the ocean in international competition in the political, economic, military, scientific and technological realms.”

These attitudes pervade current Chinese discourse on marine affairs. On February 11, 2018, for example, People’s Daily devoted a full page to the topic of China as a maritime great power. In one article, State Oceanic Administration official Zhang Haiwen (张海文) describes the ocean as “an important stage” upon which the countries of the world “strengthen their comprehensive national power, international influence, and competitiveness.” Therefore, Zhang writes, China’s efforts to accelerate its transformation into a maritime great power is “a major strategic action to ensure and satisfy China’s national security development needs, safeguard China’s maritime rights and interests, and expand China’s national strategic interests.” In a second article, former deputy director of the Chinese Academy of Military Science, Liu Jixian (刘继贤), called for China to “seize the dominant position in maritime strategic competition.”

Maritime competition is closely tied to Beijing’s ambitions to play a leading role in global affairs. On May 18, 2018, a website owned by the overseas edition of the People’s Daily published an article entitled “Why China Should Be a Maritime Great Power,” written by Jia Xiudong (贾秀东), a researcher at a think tank funded by China’s Ministry of Foreign Affairs. Jia declared: “The deep sea and the polar regions have become the new domain for international strategic competition.” Thus, in Jia’s view, “the only way for China to truly stand at the center of the world’s stage is by breaking through the restraints of the traditional maritime boundaries, and planting its feet firmly in the vast global ocean.”

This emphasis on international competition permeates the institutional cultures of Chinese oceanographic research institutes. In October 2016, the research vessel Dong Fang Hong 2 conducted a cruise to the Mariana Trench near Guam, where it recovered data from instruments moored to the ocean floor. Upon the ship’s return, the Qingdao National Laboratory for Marine Science and Technology, which led the expedition, posted a statement on its website. It declared: The age of international competition in the deep sea has begun. Vigorously carrying out deep sea research is a powerful initiative to expand China’s blue economy and safeguard China’s national security. It is vital for China to occupy the dominant position in the new round of deep-sea competition.

The statements cited above, and many others like them, demonstrate that Beijing’s interest in marine science is largely driven by national strategic objectives. Moreover, the state’s dominant role in marine science ensures that Chinese scientists can be directly mobilized to serve this national agenda. In recent years, one of the key functions of distant-ocean research has been to support China’s naval ambitions.

Since Xi Jinping came to power in 2012, China has invested vast resources to build itself into a world-class naval power. Once largely confined to the waters of the First Island Chain, the Chinese navy is now preparing to compete with American sea power in the western and central Pacific and in the Indian Ocean beyond the umbrella of its shore-based aircraft and missile batteries.

Beijing’s naval ambitions create a desperate need to improve its knowledge of the ocean battlespace environment in unfamiliar areas of the Indo-Pacific region. China mobilizes the country’s civilian oceanographers to help meet these new requirements. Their expertise is fundamental to countering U.S. submarines, which today represent the greatest conventional threat to China’s military aims. Whether conducted by ship, aircraft or other submarines, effective anti-submarine warfare requires detailed knowledge of the undersea domain. This starts with data on seabed bathymetry and geology, which are fundamental to undersea operations. It also includes the ability to forecast dynamic environmental phenomena such as surface and internal waves, sound speed, surface and undersea currents, and other factors affecting navigation, the performance of combat systems and underwater sound propagation.

Chinese oceanographers openly acknowledge the undersea warfare applications of their work. In January 2015, a State Oceanic Administration newspaper published an article entitled “The Strategic Value of Scientific Expeditions in the Western Pacific.” The article summarizes the views of two Chinese scientists about the importance of Chinese oceanographic research in the Philippine Sea. They explain: Safeguarding China’s maritime rights and interests and naval activities require the ability to obtain and assess real-time, accurate marine environmental information from multiple domains, making the water column and sea bed become transparent. Marine research is an important scientific support for assessing the environmental situation within the modern ocean battle space.