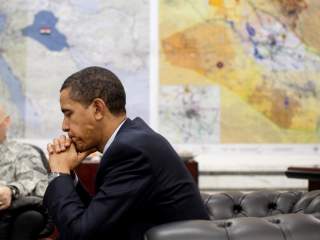 When President Barack Obama acknowledged in September 2014 that “we don’t have a strategy yet” to combat the Islamic State of Iraq and the Levant (ISIL), he stunned his supporters and detractors alike. Obama was similarly candid nine months later, when he announced in a June 2015 statement, “we don’t yet have a complete strategy.” But why not?

Three reasons appear paramount. The first is the president’s defensive approach to foreign policy. On too many issues, President Obama seems primarily motivated by what he wants to avoid rather than what he wants to achieve. Consider Iraq, Afghanistan, Ukraine and Iran, where Obama has sought to avoid military operations in recent years. Libya is the exception that proves the rule, in that the American role in deposing Muammar el-Qaddafi seems to have validated the president’s instincts about the perils of what he terms “military adventures.”

Secondly, Obama too often resembles a pedantic law professor: he is clearly quite skilled at pointing out the flaws in his subordinates’ proposals. The problem is this: a professor’s job ends at that point; a president’s starts. Yet this president’s avoidant foreign policy seems to prevent him from going further. Finally, Obama does not intuitively understand the exercise of power—not just how and when to use it, but its foundations, its psychology and its consequences. The result of these three factors is a “none-of-the-above” policy assembled from the shards of discarded options.

Obama has appropriately rejected a large-scale U.S. military intervention in Syria. Absent ISIL’s emergence, the president seems unlikely to have ordered even the relatively limited airstrikes and troop deployments he has directed so far. Despite his caution, Obama retains ambitious top-level goals—removing Syrian president Bashar al-Assad, destroying ISIL and stabilizing Syria. Unfortunately, the tension between these grand ends and a limited, incoherent effort to achieve them appears to escape the president’s notice. Indeed, after declining to fight a major war, he has also repudiated almost every other major policy option.

One possibility was not to become involved in the Syrian quagmire at all. Obama presumably knew in 2011 that he was unwilling to make the emerging civil war one of his foreign-policy priorities, much less to commit significant political capital to mobilizing public and congressional support for military operations. Yet, likely in part to avoid criticism, he did get involved by saying that “the time has come for President Assad to step aside” in August of that year. It was an understandable sentiment in the wake of the Syrian leader’s brutal suppression of dissent—but it appeared to be a rather casual statement, reflecting the moment rather than any genuine determination to oust Assad. Among other things, this has further wounded Obama’s already ailing credibility with U.S. allies in the region. At the same time, it has hamstrung the United States in pursuing a diplomatic path.

A diplomatic solution to Syria’s civil war is the most obvious alternative to military force and to disengagement. The administration appeared initially intent on pursuing this approach: it worked with other United Nations Security Council members to approve a six-point peace plan submitted by UN special envoy Kofi Annan and coordinated with the Arab League. In practice, however, the U.S. insistence upon Assad’s departure as a condition for any agreement transformed this process—and subsequent Geneva II discussions—into diplomacy of form but not substance. Taking into account that few if any leaders in Assad’s situation would agree to U.S. demands unless there were no alternative, and that the president was not contemplating forcing Assad out, this faux diplomacy has been doomed from the start—and remains so today, unless the administration dramatically increases its military role in Syria or revises its aims.

Another option was to coordinate and support efforts by America’s allies and partners in the Middle East to remove Assad or even to delegate Syria to them. For a time in 2012 and 2013, the president’s de facto policy was indeed to let regional states, especially Saudi Arabia, Qatar and Turkey, fight the Assad regime. In practice, however, this could work only if the regional states could harmonize their efforts and outdo Iran—requirements that were predictably quite difficult to meet.

“Leading from behind,” which gets more criticism than it deserves, also failed. There can be advantages to playing a supporting and coordinating role, but succeeding at it requires that U.S. leaders clearly understand two important realities: first, U.S. objectives are not identical to those of our allies or partners, and second, America’s ability to align their goals with ours is proportionate to Washington’s contribution. It is puzzling, therefore, that before ISIL’s initial successes stimulated greater U.S. involvement, the president and senior administration officials seemed to expect that they could direct the anti-Assad campaign from the sidelines, without providing too much help.

A less ambitious alternative to “leading from behind” or delegating the war to regional states would have been to contain Syria’s civil war without trying to fix it. This would have meant providing substantial support to Syria’s immediate neighbors—Iraq, Turkey, Jordan, Lebanon and Israel—to prevent the conflict from spilling over into their territory and to assist them in housing and caring for refugees. It would also have meant strengthening intelligence cooperation to thwart terrorist attacks outside Syria. Taking into account that America’s allies would face obvious challenges in removing Assad without significant U.S. military assistance, and that this would lead to a longer war, such a strategy would have been a logical course to adopt if the administration was unwilling to offer sufficient military support to its regional friends. Still, it would entail other costs, including tacit acknowledgement that Washington was not engaging directly in the conflict—something Obama was for a time loath to admit. Moreover, while this approach would spare American soldiers, doing it right would not necessarily save money. If containment was a goal, the administration did not commit the resources necessary to make it work.

Finally, the administration could have decided to arm and assist a Syrian force of sufficient power to remove Assad. The president has attempted this in a halting and half-hearted manner, constrained by efforts to avoid inadvertently bolstering terrorist elements. Together with the hasty U.S. withdrawal from Iraq and the administration’s hesitation in defining and implementing a clear strategy earlier in Syria’s civil war, the administration’s slow program to arm the opposition actually ended up facilitating the rise of the Islamic State and of other extremist anti-Assad groups like the Al Qaeda–linked Nusra Front.

Obama is not the only one who sought to find and equip an elusive Syrian moderate army to defeat Assad and the Islamic State. Many Republicans have touted a similar approach. Unfortunately, while policy makers should obviously be careful in deciding who gets U.S. weapons or a taxpayer-funded salary, particularly after our experience with the mujahideen in Afghanistan, who began by fighting the Soviet Union and later destroyed the Twin Towers on September 11, America’s political debate surrounding the so-called Syrian moderates is simplistic and self-deceptive.

The cold, hard truth is that warring factions in Syria or the former Yugoslavia, opposition figures from countries like Iraq, Iran, China and Russia, and no small number of governments around the world, are far more interested in co-opting American power than adopting American values. There is no shortage of figures experienced at mouthing the shibboleths needed to procure American help. Ahmed Chalabi, the recently deceased Iraqi exile who contributed to the George W. Bush administration’s decision to topple Saddam Hussein, was one. Another is Georgia’s former president Mikheil Saakashvili, who unsuccessfully sought U.S. support in ejecting Russian peacekeepers from Abkhazia and South Ossetia and establishing central government control in those areas. And they are hardly the only ones.

During the Cold War, U.S. leaders largely took these professions of democracy (and loyalty) for what they were—exaggerated claims that provided Washington with a face-saving way to support our enemies’ enemies. Times have changed. Today, Americans have more often than not chosen to believe these assurances and to be disappointed when they prove insincere. The president’s problem in Syria is that by broadcasting his reluctance to employ American power, Obama has vitiated the principal motivation that Syria’s anti-Assad warlords and their troops would otherwise have to speak and act like moderates. He has also sacrificed his most powerful tool in enforcing their moderate conduct—the threat that the United States would withdraw its support.

President Obama is surely correct that every conceivable approach to problems like Syria and ISIL has its shortcomings. He and his defenders will likely argue that the United States is pursuing the best elements of the options outlined above—war, diplomacy, disengagement, a regional coalition, containment and proxy war—and that U.S. policy is sophisticated and carefully calibrated. In reality, however, it is an increasingly intractable mess produced by nearly five years of zigzags and detours around various obstacles without a clear sense of direction—and it is no less “half-baked,” as Obama put it, than some of his critics’ proposals.

In fairness, a clear sense of direction is not enough in itself; several Republican presidential candidates have proposed clear but quite dangerous policies. Carly Fiorina’s assertion that “we must be prepared” to shoot down Russian jets to establish a no-fly zone in Syria is one example of an approach that both demonstrates recklessly misplaced priorities and validates the president’s accurate statement that it is easier to critique policy than to formulate it. Perversely, Fiorina’s statement also betrays an Obama-esque disregard for consequences, reminiscent of “Assad must go” and the so-called “red line” of chemical-weapons use. On top of that, since Russia’s response to Turkey downing one of its jets included the deployment of advanced S-400 antiaircraft missiles to Syria, it is not inherently apparent that destroying Russian aircraft will make it easier to establish a no-fly zone.