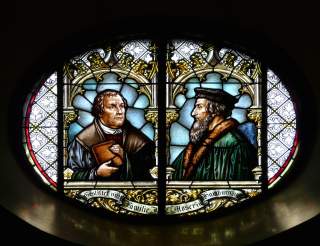 Five hundred years after Martin Luther unleashed his jeremiad against the Catholic Church, a question has seized the attention of the West with a special urgency: can Islam undergo its own reformation?

The terrorist attack on Iran’s national parliament and shrine to Ayatollah Ruhollah Khomeini; the assault on security officials in Paris; the knife-wielding attack in London; the rampage against teenage concert-goers in Manchester; the assassination of Christian pilgrims outside Cairo, Egypt; the raft of executions of civilians in Iraq; the sectarian rage fueling the Syrian Civil War—it all suggests a sickness in the soul of Islam. What is needed, many argue, is a new interpretation of sacred texts that delegitimizes the advocates of terror. Even Egyptian president Abdel Fattah el-Sisi—no champion of political liberalism—has called for “a religious revolution” to rescue Islam from those who would pervert its message.

The problem with this approach is that it evades the bitter historical lessons of Luther’s disruption of medieval Christianity. For all that it accomplished, Luther’s revolution failed to transform a society that had grown accustomed to burning heretics, persecuting the heterodox and treating religious dissenters as enemies of the state.

Make no mistake: Luther’s assault on the Catholic Church was, at its heart, a theological one—a debate about the authority of the Bible and the true path to spiritual salvation and peace with God. Against the dictates of popes and princes, Luther introduced a new source of authority into medieval Europe: individual conscience, guided by a fresh interpretation of scripture. “My conscience is captive to the word of God,” he declared. “I cannot and will not recant anything, for to go against conscience is neither right nor safe.” This was the most radical aspect of his revolution.

Nevertheless, Luther was unable to overturn the political dogmas of European society. Perhaps the most deeply rooted belief, which is also embedded in the culture of Islam, was that religious conformity, enforced by the state, was essential to preserving order.

History seemed to support this arrangement. Not long after the conversion of the emperor Constantine to Christianity in the fourth century AD, the “church of the martyrs” adopted Rome’s rough methods for maintaining social cohesion. Dissent from religious orthodoxy was criminalized throughout the empire. The institution of the Inquisition, launched in the thirteenth century, was only the latest and most severe effort to check religious divisions. “Even if my own father were a heretic,” declared Pope Paul IV, “I would gather the wood to burn him.”

Remarkably, Luther initially repudiated the entire theocratic project and offered a stirring defense of freedom of conscience. “Worldly government has laws which extend no farther than to life and property and what is external upon earth. For over the soul God can and will let no one rule but Himself,” he wrote in 1523. “Therefore, where temporal power presumes to prescribe laws for the soul, it encroaches upon God’s government and only misleads and destroys the souls.”

Luther’s appeal, however, fell on deaf ears, even among fellow Protestants. John Calvin’s aim in Geneva, for example, was to establish a holy commonwealth—a “new Israel”—a Protestant version of Christendom. Although he attacked Catholicism for its theology of persecution, Calvin quickly devised his own. Unorthodox teachings, viewed as both a political and spiritual threat, were outlawed. A denial of Calvin’s doctrine of predestination meant banishment. The state must “prevent the deadly poison from spreading.”

Most Protestants and Catholics agreed: heresy was a threat to social peace; the safest remedy was execution. Nevertheless, Calvin's infamous role in the trial and death of Michael Servetus, condemned and burned as a heretic in 1553, shocked the conscience of some in the Protestant community. They accused the Genevan authorities of adopting the “popish” ways of the Catholic Church. Sebastian Castellio, a French theologian and humanist, broke with Calvin over the issue and initiated one of the first debates over religious toleration in Europe. “I do not see how we can retain the name of Christian,” Castellio argued, “if we do not imitate His clemency and mercy.” Calvin did not yield an inch.

The die was cast. Like their Catholic antagonists, most Protestants viewed the political and religious realms as part of an unbroken spiritual unity. For all their theological innovation, they never imagined that the church could achieve its religious mission without the coercive arm of the state. The result, of course, was a series of religious wars in the sixteenth and seventeenth centuries that devastated the social fabric of Europe.

Only after this cataclysm were European leaders prepared for a second reformation: a separation of church and state that would enshrine religious freedom as a natural and inalienable right. Like Luther’s campaign, this one also originated from within the Christian community. Roger Williams, William Penn, Pierre Bayle, John Locke—virtually all of the early defenders of freedom of conscience considered the teachings of Jesus their moral lodestar. All appealed to scripture to imagine a new kind of commonwealth: a pluralistic society that guaranteed equal justice under the law, regardless of religious belief.

Still, it would take the European enlightenment—especially its American expression—to actualize this political vision. With Europe’s religious wars in mind, James Madison, the principal author of the First Amendment, insisted on a clean break from the theocratic past. “Religion or the duty which we owe to our Creator and the manner of discharging it,” he wrote in 1785, “can be directed only by reason and conviction, not by force or violence.” It is no small thing that Madison also praised “the genius and courage of Luther,” who helped the West to understand “what is due to Caesar and what is due to God.”

Modern Islam is already undergoing something akin to Europe’s wars of religion. Its reformations—religious and political—are long overdue.

Joseph Loconte is an associate professor of history at the King’s College in New York City and the author of God, Locke, and Liberty: The Struggle for Religious Freedom in the West.