Chung-in Moon: "There are no viable options except engagement in dealing with North Korea." 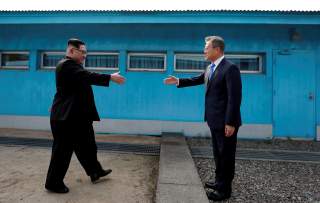 Unilateralism poses another problem. It is undeniable that the United States is a superpower, whereas North Korea is a small state. Asymmetry between the two is inevitable. But North Korea is not a defeated country and treating it as such will not result in successful negotiations. There should be a compromise that is mutually acceptable. Unilateral imposition of American views and interests could make the situation worse. North Korea’s strategic culture shaped by Kim Il-sung has made North Koreans cope with such unilateral approach by doubling down on recalcitrance.

Finally, Korean watchers in the United States need to have a more realistic and flexible attitude on North Korea. Pyongyang is not likely to accommodate American demand of “dismantle first, reward later.” If the choice is framed as “all or nothing,” Washington will continue to get nothing.

John Dale Grover is an assistant managing editor for The National Interest. He is also a fellow with Defense Priorities and a writer with Young Voices. His articles have appeared in Real Clear World, The Hill, Defense One, and Fox News. Follow him on Twitter @JohnDaleGrover.