Churchill and Orwell Face the Fiasco 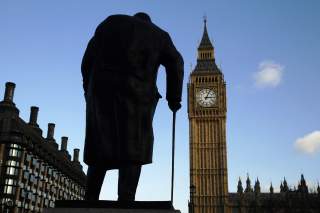 Still, one can’t help wishing we could know a bit more about Churchill’s views of Orwell’s radical insights into the nature of totalitarianism. Unfortunately, as Ricks must acknowledge, there is little to go on. Churchill was already an enormous figure of world-historical import in the first half of the 1940s, when Orwell was a fairly marginal intellectual. As a result, Orwell commented on Churchill quite a lot, while there are almost no examples of the reverse. In 1953, when Churchill read 1984 for the second time, he concluded, “It is a very remarkable book.” That was pretty much it.

THIS ASYMMETRY pervades the book, and it undermines some of the author’s more sweeping claims. Churchill’s speeches show him to be a stirring defender of liberal democracy, but he never took the time to elaborate upon a theory of government (and certainly not on the nature of “objective reality”). We venerate him for his principled defense of freedom in the spring and summer of 1940, but we tend to forget that he was also perfectly capable of ruthless moral compromises when the circumstances called for them—as when he ordered his navy to destroy the French Fleet after the generals in Paris concluded a separate peace with the Germans. It was Churchill, the beacon of light, who once observed, “In wartime, truth is so precious that she should always be attended by a bodyguard of lies.”

None of this means that we should dismiss Churchill as an unprincipled cynic; his willingness to stand up to appeasement in the 1930s, a terrible career move, should suffice to dispel any such notion. Even so, the real, human Churchill—as opposed to the iconic version beloved by Republicans—was often quite a messy character. Ricks knows this, and he makes a point of touching on a few of his hero’s darker sides. But he ultimately settles for a largely canonical portrait of the great man. It focuses on Churchill’s greatest moment of heroism, but remains silent about his less palatable aspects.

This is a shame, because Churchill can only really function as a symbol of democracy if his failings are addressed head-on. By now we have had plenty of revisionist histories of the great man that have cast light on his faults. He was, of course, an arch-imperialist, and he was not above justifying Britain’s colonial domination of the world with racist statements of a vehemence that often startled his own contemporaries: “I am strongly in favor of using poisoned gas against uncivilized tribes.” It “would spread a lively terror.” He notoriously sneered at Gandhi (whom he described as a “half-naked fakir”) and the Indian nationalist movement. “I hate Indians,” he once commented. “They are a beastly people with a beastly religion.” In 1943, a famine swept through India, leaving up to three million people dead. Colonial administrators pleaded for more food, but Churchill ignored them. Instead he blamed the Indians for “breeding like rabbits.”

Ricks’s enthusiastic portrait should be regarded as a bit out of step with the realities of the twenty-first century. Orwell, of course, has far less of a liability on this front. He remained a strong opponent of colonialism throughout his life—an attitude memorialized in his first novel, Burmese Days, which was shaped by his own dismal experience as a colonial policeman in the raj. Indeed, despite his oft-expressed admiration for Churchill, Orwell never considered joining the Conservatives. He remained, until the end of his life, a committed leftist, a man who welcomed the surprise Labour election victory in 1945 that ushered in the era of the British welfare state. (Churchill, notoriously, denounced the potential onset of “socialism” as rule by a new “Gestapo”—rhetorical overkill that undoubtedly helped the Labourites over the finish line.) Yet Ricks is largely silent on this particular moment in the two men’s biography.

Indeed, because he is so keen to show how his subjects “overlap,” Ricks ends up effacing many of the differences between them. Orwell was, for example, strongly opposed to the British government’s wartime alliance with the Soviet Union, a conflict that would have been worth exploring. Had Ricks chosen to do so, he might also have treated us to an illuminating discussion of the two strains of Cold War resistance to Soviet Communism: the traditional conservative version, represented by the ardent anti-Bolshevik Churchill, and the version practiced by the democratic Left, exemplified by Orwell. It was Orwell, after all, who showed that you could defy the Communists while clinging to the ideals of social justice. And it was Churchill who in his historic speech in Fulton, Missouri (mentioned only in passing by Ricks) first called attention to the “Iron Curtain” and the evolving ideological chasm of the postwar world. In The Fight for Freedom, Ricks reminds us that both men were freedom fighters. Who are their like today?

Christian Caryl is an editor at the Washington Post.

Image: The statue of Britain's former Prime Minister Winston Churchill is silhouetted in front of the Houses of Parliament in London January 24, 2015. Today is the 50th anniversary of the World War Two statesman's death. REUTERS/Luke MacGregor ​