Civil Defense in Korea Better Than a Bloody Nose 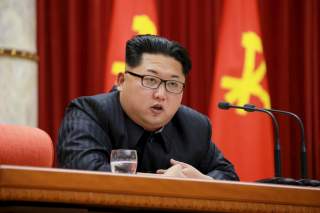 Now that Winter Olympics are over, there was one event on which the judges were unanimous—North Korea took home the gold for propaganda.

From the combined North-South hockey team to the charm of Kim Yo-jong, the North Korean leader’s sister, international attention on the North’s participation far outweighed media coverage of the host nation. So adroit was the North’s public diplomacy that many South Koreans began to comically refer to the Pyeongchang Olympics as the Pyongyang Olympics. Ivanka Trump’s belated visit was too little, too late to alter the narrative of a Korean Peninsula moving toward a rapprochement opposed by the bully in Washington. Although Ivanka broke from Vice President Mike Pence and stood for the North Korean athletes during the closing ceremony, she refused to meet with their delegates—reinforcing the impression in the South that Washington is the obstacle to dialogue.

While U.S. Olympic coaches have four years to reflect on the disappointing performance by American athletes at the winter games, the Trump administration needs to urgently come up with a solution to waning public support for the United States in South Korea. Without bold, creative action that has wide public appeal in South Korea, Washington risks becoming sidelined from discussions on the future of the Korean Peninsula, including a possible near-term summit between Kim and his counterpart, President Moon Jae-In, that would further the divide between the United States and South Korea. Fortunately, there is an overlooked, off-the-shelf remedy available that could halt the dangerous slide to complacency in the South. But Washington will only embrace that outside-the-box remedy if it grasps just how precarious its position has become in its ally.

South Korean support for American leadership has faltered in recent years, driven by the close embrace of Washington by the disgraced former president Park Geun-hye. Before resigning amidst a wide-reaching corruption scandal, Park had enthusiastically signed on to U.S. policy, including the deployment of THAAD (the ballistic missile interceptor system.) As Park’s approval ratings sank into the single digits—hitting a low of 4 percent—everything she touched, including THAAD, became tainted. To Washington’s frustration, the Korean public roundly rejected this purely defensive measure, seeing it as a device to sell overpriced American hardware and further the America-inspired militarization of the peninsula. When Park’s dwindling supporters took to the streets waving American and South Korean flags, the image of a duped Korean president manipulated by Washington was sealed. Enter Trump and Moon—the former, a businessman who campaigned on receiving more money from allies for defense (cementing the perception of America interested in making money off of its allies), and the latter, a one-time human rights lawyer determined to affirm his country’s independence from Washington on policy towards the North. Moon wasted no time making his opposition to THAAD a core part of his platform and he continues to put distance between himself and Washington.

Heaping more sanctions on the North, the Trump administration will not galvanize the South to take the threat from the North more seriously, nor are sanctions likely to have any impact on Kim’s missile and nuclear programs. At the other extreme, giving North Korea an unprovoked “bloody nose” will, particularly in the post-Olympics context, look like a bellicose step that leaves Washington, not Pyongyang, isolated. Meanwhile, the joint military exercises between the Republic of Korea and the United States have become another no-win scenario for Washington. If the annual drills are held late next month as planned, they will also appear bellicose and heavy-handed, but cancelling them would signal weakness, emboldening North Korea.

To sustain trans-Pacific unity and intensify pressure on the North, Washington needs a new tactic, one that can overcome South Korean cynicism about American intentions and reinvigorate the partnership with Seoul to blunt the threat from the Pyongyang. The way forward lies in dusting off a project from Cold War past—a vastly improved comprehensive civil defense program for the South.

The need for improved civil defense in South Korea is painfully obvious. Seoul lies only thirty-five miles from the demilitarized zone. The abject vulnerability of the capital’s citizens to artillery bombardment is one of North Korea’s primary deterrents against American military action. Diminish that vulnerability and the strategic balance shifts, raising uncertainty in Pyongyang (and Beijing) about the damage that the North could inflict on Seoul. That uncertainty would substantially increase leverage in negotiations—provided that Washington and Seoul can again present a united front.

Unlike a one-off, bloody-nose strike, civil defense is sustainable. As Seoul rolls out its plan—with revamped and redundant communication, construction of new shelters capable of withstanding attacks besides traditional ballistic weapons, expedited mass transportation to facilitate evacuation, improved facilities with adequate food, water and sanitation facilities and more frequent drills—it sends a continuous message of prudence, fully consistent with either peaceful negotiations or, if it comes to it, military confrontation.

Unlike an incendiary Trump tweet, civil defense is not inherently provocative. It denies Kim the opportunity to respond with a defiant missile or nuclear test. If Kim does so, he looks like the belligerent to South Koreans, not Washington.

And like the North’s Olympic peace offensive, civil defense is politically savvy. After all, what is more humane and unobjectionable than seeking to protect innocent civilians through purely nonmilitary means? President Moon can easily sell this to his supporters as a benign and prudent measure, while fending off charges from his critics that he’s doing nothing to challenge the North. Undertaking a concerted civil defense program at home would allow Moon and Trump greater leverage in any negotiations with the North, signaling shared resolve while diminishing the North’s most immediate point of pressure. In short, a comprehensive civil defense effort hits the sweet spot between passivity and bellicosity.

The astonishing question about South Korean civil defense is why American and South Korean administrations have neglected it for so long. Although there are enough shelters dotted throughout the country, with over 3,200 shelters in Seoul alone, their association with civil defense has been lost. The shelters double as subway stations, underground shopping malls, parking garages beneath buildings, with their potential use in times of crisis either forgotten or ignored. Most South Koreans don’t even know where their nearest shelter is or depend on a smartphone app, which could become disabled in a confrontation, to guide them. The shelters themselves are poorly outfitted, without adequate supplies of water or emergency medical equipment. The means and planning for evacuation of large numbers of Seoul inhabitants is also inadequate.

The larger issue is that the unresolved, decades long conflict with North Korea has made many South Koreans blasé about civil defense. Monthly drills held throughout the country are ignored by most Koreans, who see them more as a nuisance than a potentially lifesaving training exercise. Reinvigorating civil defense drills won’t be easy, but if any country can mobilize around a prescribed idea, it’s South Korea. Whether it’s support for government-imposed recycling policies or clamoring for the latest K-Pop sensation, Koreans are culturally ingrained to rally around a unifying idea to an astonishing degree. This has been the source of the economic miracle that is their country—going from the poorest country in the world after the Korean War to the world’s twelfth largest economy.

The United States emerges from the Olympics on a losing streak in the contest for public opinion in South Korea. Provocative tweets from President Trump and peevish behavior from Vice President Pence have been met with a combination of defiance and deft propaganda from Pyongyang. In President Moon, Washington has an uncertain, credulous partner who can be manipulated by his Northern counterpart. Dusting off and updating the Cold War concept of civil defense would give the United States a vital new tool to engage Moon and the citizens of his country. It’s too late to change the outcome of the Olympic Games—but Washington still has an opportunity to fix the dominant narrative.

Edward P. Joseph is a Lecturer & Senior Fellow at Johns Hopkins’ School of Advanced International Studies. Jason C. Moyer is the Program Coordinator at the Center for Transatlantic Relations.

Image: North Korean leader Kim Jong Un speaks during a ceremony to award party and state commendations to nuclear scientists, technicians, soldier-builders, workers and officials for their contribution to what North Korea said was a successful hydrogen bomb test, at the meeting hall of the Central Committee of the Workers' Party of Korea (WPK) in this undated photo released by North Korea's Korean Central News Agency (KCNA) on January 13, 2016.​