Clarity Out of Chaos: America Must Explain Its Taiwan Policy 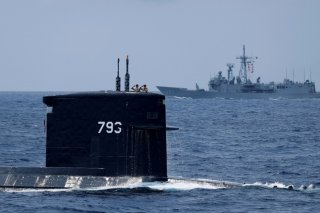 The past few weeks revealed much about U.S.-Taiwan relations, U.S.-China relations, and the clarity of U.S. policy. Given that Taiwan is deemed by many thoughtful people to be the most dangerous place on Earth, and that it is unarguably the place where the vital interests of two contending major powers overlap, clarity is important. Deterrence depends on it. Our ongoing defense policy and strategy reviews may wish to take note of this.

There was surely amused satisfaction in the leadership compound at Zhongnanhai in late October. President Joe Biden became the latest U.S. president to be tripped up by the hoary catechisms governing acceptable descriptions of our relations with Taiwan. At a CNN Town Hall, the president was asked if the U.S. military would defend the country (the word “country” applied to Taiwan is also considered inappropriate by China) in the event of a Chinese attack. Biden said, “Yes, we have a commitment to do that.” A White House official attempted to clarify Biden’s comments on Taiwan after the town hall, saying the president was “not announcing any change in our policy and there is no change in our policy.” It sounds like the staff version of “OK Boomer.” Apparently, our “unchanged policy” was assumed to be obvious to all, as no further explanation was offered. But is it?

Around this time the presence of U.S. Armed Forces personnel in Taiwan to assist with Taiwanese training was revealed. This created more confusion and the impression that we were somehow being coy about our involvement. It made our policy ambiguous to us as well as our allies and friends. This uncertain trumpet will surely be exploited in the disinformation sphere.

Other capitals in Asia, Tokyo, Manila, Canberra, and Taipei among them, likely had a different reaction to this policy kerfuffle than the Beijing leadership.

On November 11, ironically Veterans Day in the United States, the Chinese Communist Party (CCP) released the “Third Resolution on History” at the conclusion of its Sixth Plenary Session. The only two previous Resolutions on History were issued by Mao Zedong and Deng Xiaoping respectively. Mao passed the first in 1945 and Deng the second in 1981. Chairman Xi Jinping now reaches parity with these two previous exalted icons of CCP leadership. With the release of this resolution strongly praising his leadership, Xi is expected to lead China for a third term starting in 2022, effectively abolishing the term limits established by Deng.

The only reference to Taiwan in this new resolution full of praise for Xi’s leadership and achievements is a 2015 meeting with President Ma Ying-jeou. Xi surely covets additional major achievements regarding Taiwan well beyond a “good meeting” in his next term and beyond. He seeks a legacy greater than Deng and Mao. We need to understand that ambition, and its personal importance to Chairman Xi.

It didn’t have to be this way, and it must not remain this way. If we are to prevail in what our Interim Strategic Guidance calls a strategic competition with China or any other nation, and work in common cause with our allies and partners, we must have a clear, concise, and understandable policy. We need strategic clarity about our position and our commitments. We must be properly ambiguous about what, exactly, we would do to fulfill our obligation in any hypothetical situation.

Any great national and allied effort, as sought in the Interim Strategic Guidance, must be built on Carl von Clausewitz’s trinity of the government, its people, and its military acting in unity. Our obligation must speak to the people of the United States and those of our allies. The policy elite can and should continue to work the many complex nuances involved in our Taiwan relationship, from President Richard Nixon’s opening, the Taiwan Relations Act, the three communiques, the six assurances, the One China policy, and others. But our policy must be clear to Americans and our friends.

Fortunately, one of the foundation stones of our relationships provides help. Our 1979 Taiwan Relations Act announced that our decision to recognize the government in Beijing “rests upon the expectation that the future of Taiwan will be determined by peaceful means and that any effort to determine the future of Taiwan by other than peaceful means, including by boycotts or embargoes is considered a threat to the peace and security of the Western Pacific area and of grave concern to the United States.” China’s current political and military coercion directed against Taiwan certainly qualifies as the “other than peaceful means” envisioned here.

The act further directs that “the United States will make available to Taiwan such defense articles and defense services in such quantity as may be necessary to enable Taiwan to maintain a sufficient self-defense capability.”

Strategic clarity does not mean we should reveal operational plans or intentions or address hypothetical events. It does mean that we can make clear that the U.S. legal obligation to resist coercion and to provide defense articles and services entails a moral obligation to ensure success.