A Clash of Civilizations with Chinese Characteristics 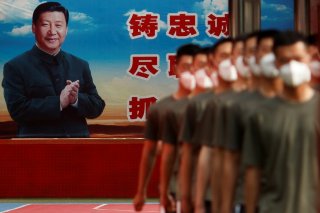 For similar reasons, the United States must also consider the urgent necessity for exploring options for a modus vivendi with the Russian Federation. The “reverse Kissinger”  proposed by some astute writers and commentators should be considered more seriously by policymakers. Washington should see the opportunity in the risks the CCP’s ambitions in Central Asia and the Middle East pose to a Russia facing demographic decline and long vulnerable borders. What the United States has been doing instead has been adopting a punitive approach to the only country in Europe that could still conceivably balance against China. If a “grand bargain” can be reached with the Russian Federation regarding its deep-seated insecurities about its territorial integrity and historically precarious borders in Eastern Europe, as well as lingering concerns in the Kremlin over U.S. attempts to promote regime change in Russia, there will be fewer grounds for Russian leaders to convince a domestic audience that the real threat lies to the West.

The United States should also be working for a closer partnership with India. It is the only country with a population that may exceed China’s, as well as untapped economic potential that could rival what has been achieved in China since the reforms of Deng Xiaoping. For this to work, Washington must be willing to fully support the reform agenda of Narendra Modi to overcome the myriad obstacles India faces in exploiting its domestic talent and demographic advantages. A closer alignment between India and the United States would also strike at the heart of the “rest versus the West” dynamic that lies at the ideological core of the CCP’s grand strategy.

On the home front, America cannot realistically cleave itself from the world’s second-largest economy nor can it completely reverse Beijing’s unprecedented integration into the world’s supply chains and financial systems. What the United States can do is impose and enforce strict requirements in transparency and accountability for Chinese business interests seeking to engage in Western markets. Financial regulations as established by the U.S. Securities and Exchange Commission, for example, do not at present require companies identified as “foreign private issuers” from complying with the same standards of corporate governance and reporting requirements as U.S. companies. In a totalitarian state such as China, is it realistic to suggest that any “private” company or organization can be truly separate or independent from the Party in Beijing? For similar reasons, the United States should be enforcing and expanding investment bans with security implications such as the one imposed in 2020 on companies with ties to the Chinese military.

The restrictions and reporting requirements that were beginning to be established in 2020 also need to continue and be expanded to include any and all organs of influence that can be plausibly connected to the CCP. A legal framework for foreign funding reporting requirements should be devised in order to establish transparency and accountability for universities, think tanks, media outlets, and any other civil society organizations that foreign powers, especially the CCP, seek to compromise. Legal sanctions and criminal penalties for individuals and organizations that fail to properly disclose foreign funding from U.S. adversaries should be enforced more widely.

These measures should be considered complementary, rather than alternatives, to existing proposals for naval deterrence in the Indo-Pacific. The geopolitical implications for Western civilization from Chinese hegemony over Eurasia should also be accounted for in any U.S. strategy. Any policy that cannot go beyond simply “pivoting” or “decoupling” fails to capture the full threat being posed not just to the United States but to the very future of the West. A world in which the “rest” is pitted against the West, where the United States faces a consolidating Eurasian continent across either shore, and the geopolitical axis of the world shifts to a totalitarian party in Beijing will not be a world where the United States will remain secure or sovereign for long.

Wesley Jefferies is a graduate student at the Walsh School of Foreign Service’s Security Studies Program at Georgetown University in Washington, DC.