Clash of the Titans: India and Pakistan Continue to Battle Over Kashmir 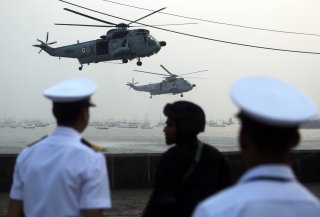 Last week, a senior Indian national security reporter dropped a bombshell that, at first glance, should have turned more heads. The story revealed “persistent” rumors in New Delhi of a secret diplomatic backchannel currently underway between India and Pakistan. The speculation is that these talks, purportedly involving senior officials holed up in Washington and London, have included discussions on everything from “the fate of Kashmir” to “the future of Afghanistan”.

The report was instructive for several reasons, not least its author. Praveen Swami’s chumminess with the Indian security establishment has been scrutinized in the past, but in this instance, his cozy relationship with the military brass adds credibility to the claims. In all likelihood, this report is not coming from nowhere. If nothing else, it could be a senior leader in the BJP government or security apparatus publicly musing or floating the possibility to gauge the idea’s reception.

Any news that portends warmer ties between India and Pakistan or progress on a Kashmir settlement should be welcomed. That said, the same pathologies that have doomed past efforts at rapprochement in South Asia still exist. Without excising those, peacebuilding in the region will always be a precarious enterprise, a Jenga-like structure vulnerable to the diplomatic equivalent of someone breathing too hard.

Hardliners in Pakistan and India

Casual observers of South Asia may be surprised by just how often India and Pakistan embark on a process of normalizing ties. There has been at least one such attempt in each of the last four decades: between Zia-ul-Haq and Rajiv Gandhi (1980s), Nawaz Sharif and Atal Behari Vajpayee (1990s), Manmohan Singh with both Pervez Musharraf and briefly Asif Ali Zardari (2000s), and Nawaz Sharif and Narendra Modi (2010s). More than one of these efforts has involved detailed negotiations over Kashmir.

The cynic might interject that such fleeting optimism only serves to intersperse insurgencies, terrorist attacks, and threats of nuclear war. True enough. But it bears repeating that, under the right circumstances, the leaderships of India and Pakistan are not impervious to the seductive scent of a landmark peace deal or treaty.

Yet each of those attempts failed, and handily at that. The reasons were predictable: hardliners on both sides scuttling painstaking progress, unwilling to expend political capital and risk their domestic standing, reputations, and careers.

In Pakistan, the main problem has been the security establishment. Tellingly, even hawkish Pakistani generals, from Zia to Musharraf to now (reportedly) Bajwa, have shown that they are not, in principle, against deal-making with India. Rather, what they object to is deals negotiated by civilians.

Over the past two decades, the army and intelligence services have upended, undercut, and undermined the efforts of elected politicians to thaw relations not once (1999), not twice (2008), but thrice (2016). Having arrogated to itself the role of national custodian, the security establishment does not trust politicians to represent Pakistan with India. Each time the hapless civilian leaders dare to do so, like clockwork, a major terrorist attack or act of war on Indian soil happens to take place.

In India, the issue has not been one specific actor, but a wider ideology: nationalism, a powerful and pernicious force. Indian nationalists often protest that they hardly give the time of day to Pakistan and have bigger fish to fry.

But their western neighbor remains a resonant symbol that evokes suspicion, mistrust, and contempt from the Indian body politic, security establishment, and society writ-large, with the notable exception of the south and, perhaps, the northeast. “Pakistan,” both as a word and as an idea, is used as a rhetorical cudgel across the political spectrum: right-wingers will tell their opponents to “go to Pakistan” while liberals will urge their opponents to not turn India into a “Hindu Pakistan.” Even amongst sophisticated Indian observers, the understanding of Pakistan and Pakistani society remains largely a caricature.

The mid-2000s serve to highlight the severe costs that these two dynamics impose on South Asia. It was an opportune time for negotiation: the United States was deeply involved in the region and had leverage and credibility with both parties. The pair’s nuclear tests were almost a decade old, sufficient time for decisionmakers to adjust to new geostrategic realities. Each government wished to pursue an accommodationist course. The Mumbai terror attacks, which poisoned the idea of cooperating with Pakistan for a generous swathe of the Indian intelligentsia and policymaking community, had not yet occurred.

Sure enough, in 2006, Pakistan and India came tantalizingly close to demilitarizing the Siachen glacier—the highest, coldest, and most punishing battlefield in the world, occupied by Indian and Pakistani troops since the early 1980s. At the last minute, according to a book by India’s former Foreign Secretary, M. K. Narayanan (the Indian National Security Advisor) and Gen. J. J. Singh (the Army Chief) lobbied against the deal, dashing hopes of an agreement.

Worse followed in 2007. Back-channel talks, having taken place over several years in locations such as Bangkok, Dubai, and London between emissaries from Manmohan Singh and Pervez Musharraf, were so advanced that the two had “come to semicolons” in a draft agreement on Kashmir. A visit by the Indian prime minister to Pakistan to announce the deal, and begin its implementation, was in the works. But Musharraf, a dictator who rose to power in a coup, began to lose his grip on the country and responded as all authoritarians are wont to do: desperation and force. By the end of the year, he was no longer Army Chief. By the next year, he was out of public life altogether.

The year 2006 showed that the ugly image of Pakistan in India’s collective strategic thinking can be self-defeating. The year 2007 showed that Pakistani military leaders will seldom enjoy the broad-based and institutionalized political support that freely and fairly elected governments are built on. When mired in sensitive diplomacy, such support can be worth its weight in gold.

A far cry from the mid-2000s, the noxious atmosphere in South Asia today is hardly facilitative of constructive dialog. Barely eighteen months ago, India and Pakistan flew fighter jets into each other’s airspace for the first time since 1971. Exactly a year ago, Modi’s BJP government executed a suffocating clampdown on Kashmir. Since then, Imran Khan has referred to Modi’s regime as “fascist” and likened Modi to Hitler, while Indian leaders and security officials have spoken of designs to annex Pakistani Kashmir.

Under such conditions, an inclination to despair may seem natural. In truth, objective conditions show the advisability of talking on Kashmir.

From Pakistan’s perspective, the conflict has exacted an enormous toll: blowback from the militarization and Islamization of its foreign policy in the form of a deadly insurgency that brought the state to its knees, pariah status in major global capitals for its sponsorship of terrorism, and economic ruin impelled by avaricious defense budgets.

Meanwhile, India’s hardball strategy under Modi, both on Kashmir and the region more generally, has largely failed. Domestically, space for mainstream politics in the Valley has essentially vanished, recruitment of homegrown militants continues unabated, and the Kashmiri street remains bitterly angry. Regionally, New Delhi’s ties with Bangladesh, Nepal, and Sri Lanka have deteriorated. Most importantly, its aggressive behavior last August invited retaliation from China, boxing it into a crisis where India has few palatable options.

International Relations research suggests that leaders of regional rivals tend to bury the past only when it serves some larger geopolitical purpose and helps solidify their domestic rule. The good news is that these are exactly the conditions that obtain in India and Pakistan today. The bad news is the two governments may not see it that way and certainly evince little indication that they are prepared to make tough concessions on territory, terrorism, and trade.

If India and Pakistan are interested, however, then there are viable solutions to the Kashmir conflict. The near-settlement under Musharraf and Manmohan—which calls for (1) demilitarization and (2) self-governance for the entire historical state of Jammu and Kashmir, (3) free movement of people and goods across the border, and (4) joint management of Kashmir by Indians, Pakistanis, and Kashmiris—is a sound departure point.

From Kosovo to the Cook Islands, from Gibraltar to Monaco, it is evident that sovereignty in international politics is layered and nuanced, not a simple binary of independent statehood or bust. Whether India and Pakistan can operate with sufficient boldness and deftness within that maneuverability is, of course, another question entirely.

Though Kashmir grabs the headlines, it is in many ways a distraction from the fundamental social and political challenges facing Indian and Pakistani citizens both: abysmally low standards of living and climate change.

Nationalist Indians gloat about their economy being the fifth largest in the world but in the UN Human Development Index, which accounts for health, education, and per capita wealth, India ranks in the bottom third of countries (129th to be exact). India lags tiny war-torn Latin American countries like Guatemala and El Salvador and only narrowly edges poor sub-Saharan African states like Namibia and the Congo.