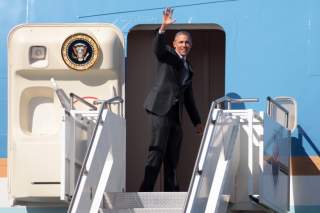 Presidents come to office intent on championing a domestic agenda. Our next one will be no different. Sadly, the rest of the world won’t simmer contently on the back-burner. Friends and enemies will want to know where they stand with the new Oval Office. Some will test the mettle of a fledgling administration.

That can get ugly. For a new president, it makes more sense to come to D.C. with a plan that helps a president effectively act rather than react, both at home and abroad.

The United States is a global power with global interests. Tending to those interests requires constant attention. And often those foreign interests affect domestic affairs. Even if the White House wanted to divide stateside and overseas interests in separate gardens and tend them at the chief executive’s leisure, that approach wouldn’t work. The White House has to have a plan.

Hope is not a plan. Whoever comes out on top in 2016 can cross fingers and hope the world remains sedated for a few years while the new team revamps taxes, budgets, healthcare, environmental regulations and entitlements. But, that hasn’t panned out for any president in the modern era. The good ones never thought it might.

Case in point: Dwight David Eisenhower. Ike entered the Oval Office after a lifetime of soldiering. The Cold War was intense. Most observers expected Eisenhower to be obsessed with foreign and defense policy. Yet Ike’s top priority was domestic affairs. And he feared that facing off against the Russians would be a huge distraction. “Where will it lead us?” he lamented to aide Emmett Hughes. “At worst to atomic warfare. At best, to robbing every people and nation on Earth of the fruits of their own toil.”

Still, Ike was too realistic to believe he could get by without a plan that would convince the world he was serious about the Soviet threat. Eisenhower proceeded to organize the Solarium Project, tasking his national-security team to work through different options for handling the Cold War. This initiative is often wrongly portrayed as the president leaning on the bureaucracy to help him think through big problems. Evan Thomas (in Ike's Bluff: President Eisenhower's Secret Battle to Save the World) and others rightly point out that Ike knew what he wanted to do from the start. He had a plan. Project Solarium was an exercise to get the rest of the national-security establishment to recognize the right course of action. Everyone is more likely to agree, Ike reasoned, when they thought it was their idea. The point was, Ike had a plan. And he got his team to buy into it.

Of course, just having a plan is not enough. The enemy gets a vote, too. When Jimmy Carter came to office, there were also expectations that his presidency would be more than a little interested in defense and foreign policy. He was, after all, an Annapolis graduate and a veteran naval officer. But in the aftermath of the Vietnam War, Carter was much more interested in doing some nation-building right here at home. Still, Carter went through the motions of having a plan for engaging with the world. It was wildly unrealistic. It assumed America’s enemies would be cooperative if the White House acted nice. And it assumed that the United States could just walk away from complicated parts of the world—from South Korea and Latin America to the Middle East and Africa—if things got too messy.

Crisis after crisis quickly withered Carter’s optimism. A recent official history of the relationship between the president and the Joint Chiefs of Staff by Steven Reardon and Kenneth Foulkes details how the president’s eagerness for his strategy diverged increasingly from the reality of U.S. policy failures.

Carter’s plan suffered from a fatal flaw. It was crafted for the world he wanted—not for the world as it was. In his review of Lawrence Freedman’s Strategy: A History, H.R. McMaster describes this pathology as “the tendency to assume that enemies and adversaries will cooperate with plans and thereby ensure linear progress toward strategic objectives.”

A president’s plan has to survive in a competitive environment where actions provoke counteractions.

Even a sound plan is not enough. Leadership matters. Pulling a plan off requires commitment—including significant engagement and oversight from the top. Henry Mintzberg’s classic study The Fall of Rise Strategic Planning demonstrates how not marrying a solid strategy with senior leader engagement is a strategy for failure. The dynamics he describes are as important for presidents as they are for corporate giants.

In contrast to Carter, Ronald Reagan came to office with a well-developed guiding idea on how to handle the Soviets, a commitment to making it work and a willingness to revise as warranted by Soviet responses. As historian James Wilson lays out in Triumph of Improvisation, the ability to adapt and innovate by “individuals in position of power ended almost a half century of cold war and the specter of a nuclear holocaust.” It was Reagan’s willingness to roll up his sleeves and put just enough of his presidential time and talent into the foreign-affairs agenda that produced successes on the home front and overseas.

So when it comes to foreign and defense affairs, the next president will need a plan—a good plan—an unwavering commitment to managing it well.

Putting together the right foreign-policy plan for the next White House will be a serious feat.

America is in a weird place. Americans don't look to the future with certainty or confidence—either at home or abroad. They want change—though there is no unanimity on what that change should look like. They don’t want to be murdered in their beds by foreign enemies. They want their presidents to protect them—but they also want peace, prosperity and freedom here at home. They are not interventionists, nor are they isolationists.

No president could ask for a more ambivalent mandate.

So what will likely work best for the next president is a strategy that allows plenty of space for domestic action paired with a foreign policy that demonstrates the intent to reassert U.S. leadership—ramping back up U.S. military capabilities and constructive engagement.

America’s competitors, however, are unlikely to stand idly by like a batter waiting for a new pitcher to warm up. The president will need a “gap” strategy—to tide the country over from the time the new administration takes office until the time when he or she has all the instruments of national power back up to full speed.

For example, it is unlikely that the new president could start out with double-digit increases in defense spending, as Ronald Reagan did in his first term. Nevertheless, a new president will need to lay down a marker demonstrating serious reinvestment in the U.S. military.

There rests the real challenge for the next president. Since making everything a priority makes nothing a priority, our next chief executive must dedicate enough attention to reasserting America's global leadership, while not distracting from the task of helping remake the nation into a true land of opportunity.

The trick to a good gap strategy is picking the most impactful initiatives that both reassure friends and allies and force competitors to recalculate.

An honest assessment of America’s strengths, weaknesses, threats and opportunities would highlight where the focus of U.S. effort needs to be. Here are six key areas:

The three most important parts of the world for the United States are Europe, the Middle East and Asia. Reinvesting in key relationships in all three tops the agenda. In Europe, the United Kingdom remains America’s anchor to the continent. Equally vital are the Nordic, Baltic and Central European states at the fault line between East and West. Meanwhile, Japan and South Korea are the powers that anchor America as an Asia-Pacific power. Relations with India and Australia are crucial for dealing with China. In the Middle East, the United States needs a dependable string of allies from Tunisia through Morocco, Egypt, Israel, Jordan and Iraq to act as firebreak against the region falling apart.

A free-market energy policy opens access to resources, removes onerous and duplicative regulatory roadblocks, subsidies and impediments to exploiting and sharing technologies. Letting the market determine our energy future will not only boost our economy, it will undermine nations who use energy as a weapon to extort concessions from other countries. It will also reduce the energy profits that unsavory regimes use to fund destabilizing foreign policies and suppress their own people.

The United States needs a revitalized effort that recognizes the threat of global Islamist insurgencies and ensures crushing defeats in key strategic countries like Iraq and Afghanistan.

For starters, the next president will need to beef up readiness across the board, reverse ground-troop cuts, accelerate ship building and bring some stability to acquisition programs. The Pentagon must pair this effort with a serious reform agenda that delivers real efficiencies, while growing capabilities and capacity.

The United States will have to roll out new strategies for dealing with these powers. For Russia, our strategy should focus on marginalizing Moscow’s influence on European affairs. For China, we need to come up with a regional strategy that makes Beijing more cautious about thinking that it can call the shots in the Asia-Pacific with impunity.