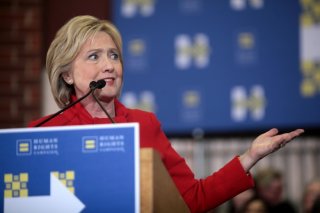 Since the Democratic primaries, Hillary Clinton has turned in a series of solid but unspectacular debate performances, seldom inspiring but never losing. She added another Monday night with her much anticipated first encounter with Donald Trump.

For the first half hour, Trump landed more blows than Bernie Sanders ever did. But Clinton outlasted Trump for the next sixty minutes, during which the Republican nominee looked like a stand-up comedian who had run out of material before his time at the microphone was up.

Much of this owes to Trump’s obvious lack of preparation, but Clinton came armed with a good game plan which she executed nearly flawlessly. Use Trump’s ego against him, wound his pride and draw him into a series of fruitless exchanges.

Clinton channeled Harry Reid in accusing Trump of not paying any taxes. Instead of pointing out that such charges had proven baseless when leveled against Mitt Romney, Trump appeared to agree with her, arguing that not paying taxes would prove how smart he is. (Even if Clinton’s accusation was true, Trump had little to lose by bringing up Reid’s false allegations against Romney—he won’t release his returns so we’ll never know.)

The Democrat mentioned a contractor Trump didn’t pay and talked about how she was lucky her own father never did business with someone so unscrupulous. Trump ended up saying the person must have done a bad job.

Clinton repeated Megyn Kelly’s list of terrible things Trump has said about women, or at least an abbreviated version. Trump responded by insulting Rosie O’Donnell, as if to prove Clinton’s point.

Trump was most effective and Clinton least when he talked about the problems facing struggling Americans. She had no answer to his pitch on trade other than to deny flip-flopping on the Trans-Pacific Partnership and unconvincingly say everything was hunky-dory with American manufacturing after her husband’s administration.

Clinton was trying to run against Trump as if he were a standard-issue Republican on economics, focusing on his areas of argument with the party’s fiscal orthodoxy. Where Trump was not a disciple of Paul Ryan, Clinton seemed out of sorts.

Fortunately for Clinton, it is very easy to get Trump to stop talking about the American people and change the subject to something he finds infinitely more interesting: himself. And when Trump talks about himself, he is more vulnerable.

Clinton set trap after trap for Trump and he could seldom avoid the temptation of walking right in. Frequently a joyless campaigner, Clinton was clearly happy with the way things were unfolding. When Trump launched into an ill-tempered rant about how an awkward Clinton video proved she lacked presidential temperament she cooed, “Oooh. Okay.”

She might have well echoed Ronald Reagan: “There you go again.”

Trump felt the need to respond to every little Clinton jibe rather than stick to counterattacks centered on her negatives. In the process, he often repeated her charges against him. When Trump did get in a good shot, he would over-pursue rather than let it go. The man can never quit while he is ahead, while Clinton went negative in moderation. Often, she simply hung back and let him make her case for him.

Why on earth Trump allowed himself to be drawn into an extended discussion of his recently disavowed birther advocacy, much less citing President Obama’s release of his birth certificate as evidence of his effectiveness, is a question for the ages.

That’s not to say that Clinton was perfect. If you didn’t like her going into Monday night’s debate, at best you may only like her better than Trump. Even so, she was stiffer and more rehearsed, the downside of being better prepared and more scripted. If you didn’t trust her at the outset of the debate, she did little to change your mind.

But Clinton did do a better job reinforcing concerns about Trump’s readiness for the Oval Office than he did reinforcing concerns that she is untrustworthy and out of touch. Trump needed to make himself look like a risk worth taking, while Clinton presented herself as not being much of a risk at all.

Clinton may never truly be “likeable enough.” But in the first debate, she was certainly good enough.

W. James Antle III is politics editor of the Washington Examiner and author of Devouring Freedom? Can Big Government Ever Be Stopped?

Image: Former Secretary of State Hillary Clinton speaking with supporters at a "Get Out the Caucus" rally at Valley Southwoods Freshman High School in West Des Moines, Iowa. Flickr/Gage Skidmore