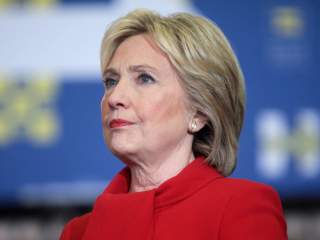 This Wednesday at a fundraiser in Columbia, South Carolina, Black Lives Matter activist Ashley Williams demanded that Democratic presidential contender Hillary Clinton apologize to black people for “mass incarceration.” In a speech Clinton gave twenty years ago, she equated some black youths to “super-predators.” Williams unfurled a handmade sign that included a quote from that speech: “we have to bring [the super-predators] to heel.” After a tense exchange between the Williams and Clinton, the former was ushered out of the fundraiser. Thursday afternoon, Clinton capitulated. She delivered a prissy apology to the Washington Post: “Looking back, I shouldn’t have used those words, and I wouldn’t use them today.”

Score one for Black Lives Matter. It brought Clinton herself to heel. The movement has developed an expertise at targeting liberal politicians. This mau-mauing is the sort of rote political stunt we have come to expect from Black Lives Matter. The modus operandi seems to be as follows: make your point to get prominent play in the news cycle, and then leave. Nothing of substance seems to come from these incidents aside from strategically placed headlines. There is no indication whether or not the millions of black people behind bars are going to be helped by her actions.

I’ve written before that activists make terrible leaders, but now it seems as though activists aren’t engaging in effective activism, either. Isn’t the role of Black Lives Matter to bring attention to preventable tragedies like those of Eric Garner and Trayvon Martin? Black activism has morphed into radical chic, a phase that educated black people undertake as they transition from student to professional.

Williams is getting her master’s degree from the University of North Carolina, an excellent state school. A perverse new form of privilege is apparently emerging within black activism: those who can afford to protest and those who cannot. This represents the shifting nature of black protest: sixty years ago, radical black activism as represented by the Black Panther movement, for example, formed a paramilitary force that used violence and leveraged the press to disseminate a belligerent revolutionary political message. It was drastically at odds with what Martin Luther King Jr. was preaching.

Today radical black activism, or what passes for it, is very different. It’s reaching levels of self-parody by simply screaming at whoever the target of the day is. It’s indifferent to achieving any results. It just matters that you “raise awareness”. A group of young, angry students who are appalled at injustice do not comprise a movement, or at least a movement that can make a tangible difference. Organization, clear objectives, and willingness to compromise and change direction does. These things require real work, and are not always newsworthy, but they are necessary.

In their attempt to bring the suffering of the communities to the forefront of political discourse, Black Lives Matter and similar activist organizations exacerbate the suffering of marginalized blacks and other minority groups. By reducing the bulk of their work to censoring offensive speech, the black lives that most need to be helped are left on the wayside. For decades, poor, marginalized blacks have been used as pawns for legitimacy by social and political movements. Everyone from Jesse Jackson to Bernie Sanders to Black Lives Matter claims to be a voice for black lives, but the truth is even as they do so, more, not fewer, black people are suffering. Black lives deserve better than a twenty-three-year old holding a sign. They deserve professionals who are driven by empathy and not a desire for cheap publicity.