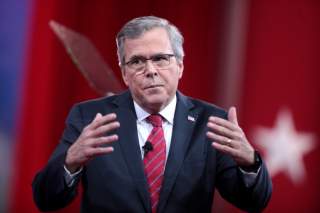 Was this the debate where Marco Rubio became the GOP frontrunner? Not really—Donald Trump and Ben Carson, neither of whom took any damage, still lead the pack, and there’s plenty of jostling among the others for the number three slot. Ted Cruz had about as good a night as Rubio. But the Florida senator certainly stands to gain the most from Jeb Bush’s ongoing implosion, and after a pitiful performance last night Bush looks about as forlorn as ever Rick Perry or Scott Walker did.

Ten candidates packed the stage at the University of Colorado, Boulder for CNBC’s “Your Money, Your Vote” debate, focused on almost entirely on economic issues. The financial channel’s Washington bureau chief, John Harwood, moderated, alongside colleagues Carl Quintanilla and Becky Quick, with supplemental questions posed by Jim Cramer and Rick Santelli. The moderators were the story of the night—and also the secret to Rubio’s success.

They badgered the candidates with questions about their personal finances and business affairs: “Your Atlantic City casinos filed for bankruptcy four times,” Quick reminded Donald Trump. “Your board”—at Hewlett-Packard—“fired you. I just wondered why you think we should hire you now,” Quick asked Carly Fiorina. Noting his absences from the Senate had led the Sun-Sentinel newspaper to call for Rubio to resign, Quintanilla demanded of him, “Well, do you hate your job?”

And Quintanilla had more to confront the senator with:

“You have a lack of bookkeeping skills. You accidentally intermingled campaign money with your personal money. You faced foreclosure on a second home that you bought. And just last year, you liquidated a $68,000 retirement fund. That’s something that cost you thousands of dollars in taxes and penalties.

In terms of all of that, it raises the question whether you have the maturity and wisdom to lead this $17 trillion economy. What do you say?”

What could Rubio say, other than what he did—“you just listed a litany of discredited attacks from Democrats and my political opponents, and I’m not gonna waste 60 seconds detailing them all”—before launching into the uplifting tale of his life story? (“I didn’t inherit any money. My dad was a bartender, my mother was a maid. They worked hard to provide us the chance at a better life.”)

If the moderators had pressed Rubio as hard on policy as on the arcana of his personal finances, he might not have had much opportunity to shine. His ideas are little much different from his rivals’, some of whom—notably Cruz and Fiorina—present the basic conservative Republican small-government, growth-and-opportunity message much more forcefully than Rubio. But Quintanilla’s questioning turned the Florida senator a figure of sympathy and gave him an opening to defend his probity and recite his biography, which he did as well as might be expected.

The problem with CNBC’s moderators wasn’t that they were guilty of “liberal media bias,” as conservatives like to say, left of center though Harwood and company may be. They were simply bad journalists, failing to distinguish between lines of questioning that could lead to serious policy answers and those that could only elicit evasion or bickering. Far from being tough, probing inquiries, the moderator’s remarks were well-worn criticisms that Rubio and Fiorina in particular were perfectly prepared to deflect. What makes for a good investigative story in the New York Times or on “60 Minutes” isn’t necessarily what makes for a reasonable debate question—certainly not when there are ten candidates on stage, the luckiest of whom would get less than 10 minutes to speak over the debate’s two and a half hours.

(Truth be told: Republicans are not the only ones who get these bogus “gotcha” questions, of course: asking Hillary Clinton about her email in the Democratic debate was tiptoeing to the edge of the same abyss, and other viewers must have been as relieved as I was when Bernie Sanders banished it from the discussion—not because there’s not a serious issue here but because there’s nothing Clinton could say in a debate that would be any different from what she’s said every other time she’s been asked about this, and having rivals kvetch about such things on stage does nothing to add to the sum of anyone’s knowledge.)

Although Rand Paul got the least time to speak, Jeb Bush was the night’s biggest loser. He botched an attack on Rubio, first taking up Quick’s accusation (and the Sun-Sentinel’s) that Rubio was a deadbeat legislator—“I’m a constituent of the senator and I helped him and I expected that he would do constituent service, which means that he shows up to work”—then crumpling when Rubio came back with an obvious retort: “I don’t remember you ever complaining about John McCain’s vote record. The only reason why you’re doing it now is because we’re running for the same position, and someone has convinced you that attacking me is going to help you.”

Amid the barbs and bromides, the night was not without a few character moments. Bush provided one when he said, in reply to a question about his greatest weakness, “You know, I am by my nature impatient. And this is not an endeavor that rewards that. You gotta be patient. You gotta be—stick with it, and all that. But also, I can’t fake anger.”

This was close to an admission of being what Donald Trump had called a “low-energy guy.” But Bush actually answered the question, which other candidates responded to with jokes or talking points, and what he said was certainly true. And he did seem annoyed, if not angry, about a Republican field seemed to “believe that this country’s days are going to be deeply — you know, going down. I think we’re on the verge of the greatest time, and I want to fix the things to let people rise up.”

And how would Bush fix things? “I have a plan to grow the economy at 4 percent, but you’re gonna have to make adjustments for both Medicare and Social Security.”

Other candidates similarly stuck to familiar talking points, though Donald Trump revealed he is none too familiar with policies his own website endorses. Asked about H1B visas—which permit businesses to bring skilled workers into the country when they can’t find Americans to hire—Trump answered with the non sequitur that he only supports legal immigration and would build a wall to keep out illegals. His rambling remarks led toward the conclusion that he wants no limits on legal immigration as it currently exists. More likely he wants to have it both ways: signaling to those who read his website that he’s for reduced immigration across the board, while presenting a more immigrant-friendly demeanor to a national debate audience.

Trump doesn’t know what he’s talking about but always sounds confident as he says it. The same is often true of Carly Fiorina, who claimed that “92 percent of the jobs lost during Barack Obama’s first term belonged to women.” (In fairness, she seems to have picked up this particular piece of nonsense from the Mitt Romney campaign.) One of Fiorina’s key economic proposals is to cut the tax code from 73,000 pages down to three. Swell. Why not two?

At the opposite end of the political experience spectrum, John Kasich has a record—as a governor and House budget chairman—and never tires of reminding voters of it. He also has policies that are sometimes sharply at variance with the rest of the field. With Kasich arguing for balanced budgets and shoring up the welfare state while other candidates proposed pie-in-the-sky tax reforms and economic panaceas, he sounded almost as out of place as Jim Webb did at the first Democratic debate. And almost as exasperated: “I’ve watched to see people say that we should dismantle Medicare and Medicaid and leave the senior citizens out—out in the—in the cold,” he said in his first answer. “I’ve heard about tax schemes that don’t add up, that put our kids in—in a deeper hole than they are today.”

Mike Huckabee, by contrast, was genial throughout the night, though together with Kasich he gave small-government conservatives much cause for irritation. (He too emphasized protecting the welfare state: “Today congress decided to take another $150 billion dollars away from Social Security so they can borrow more money.That makes no sense to everybody.”)

Huckabee’s rival for the evangelical vote, Ben Carson, was equally genial and, like Rubio, fared best when CNBC’s moderators tried to embarrass him: asked how he could serve on the board of Costco, “a company whose policies seem to run counter to your views on homosexuality”—indeed, “the number one gay-friendly brand in America”—Carson calmly explained:

“I believe that our Constitution protects everybody, regardless of their sexual orientation or any other aspect. I also believe that marriage is between one man and one woman. And there is no reason that you can’t be perfectly fair to the gay community.

They shouldn’t automatically assume that because you believe that marriage is between one man and one woman that you are a homophobe. And this is one of the myths that the left perpetrates on our society, and this is how they frighten people and get people to shut up. You know, that’s what the PC culture is all about, and it’s destroying this nation.”