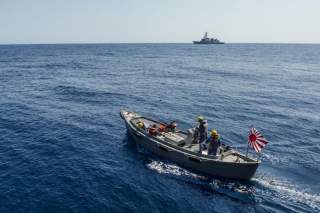 Chinese activities in the China Seas over the past few years have caused growing consternation among other East and Southeast Asian countries, as well as countries concerned about peace and stability, such as the United States. Recent developments in the region (as recently as last week) have generated calls from U.S. foreign policy circles for a more robust response to Chinese land construction, broad jurisdictional claims, and aggressive actions against other claimants’ state and civilian vessels. Recent pieces, including those by David Barno and Nora Bensahel and by Aaron Picozzi and Lincoln Davidson, have joined the chorus calling on the United States to do more with more partners, to protect freedom of navigation, uphold the widely accepted interpretation of the United Nations Convention on the Law of the Sea, and preserve peace and stability more generally—notably through an increased U.S. Coast Guard presence.

Most Chinese actions taken have been through maritime constabulary forces—governmental maritime armed forces charged with law enforcement and other missions, aside from warfare. Such forces can be called coast guards, fishery protection squadrons, maritime police and myriad other names. In China’s case, these forces include the Coast Guard (itself a recent consolidation of multiple maritime constabulary forces) and the Maritime Safety Administration. In response to China Coast Guard presence and action in the South China Sea, analysts such as the ones noted above suggest that increasing the United States’ and regional partners’ maritime constabulary presence will counter the Chinese deployments in a manner less provocative than naval flotillas would.

Such recommendations deserve reconsideration for several reasons. First, it is not clear that maritime constabulary forces—even if they are less provocative than naval forces—would lower the risk of conflict. In fact, the very issue of civilian involvement, noted ably by Picozzi and Davidson, is a complicating factor that can exacerbate the risk of conflict. Second, calls for increased U.S. Coast Guard presence fail to consider what lurks over the horizon: the People’s Liberation Army Navy, which serves an enabler of and a shield for aggressive Chinese coast-guard actions in the South China Sea.

History offers us few historical guides for what the international community is witnessing in the South China Sea today. Naval-constabulary conflicts are rather rare, and the most famous example—the Anglo-Icelandic Cod Wars of the 1950s–1970s—is not a useful guide because there are too many important dissimilarities: the reversed power balance between sides, the object at stake and circumstances of the conflict, and the fact that one side (Iceland) had no recourse to a navy as a backup. Yet it seems logical to think that constabulary forces would be less provocative than naval forces and, by extension, would lower the risk of conflict. Maritime constabulary forces carry the imprimatur of law enforcement, not of war. Their vessels tend to be smaller and equipped with lighter, relatively less destructive weapons; their personnel usually have not received the level of martial training that we would expect of, say, a submariner. And by choosing to deploy a constabulary force rather than a navy, a country can signal to others that its intention is to prevent a dispute from escalating to something more serious.

However, as the analyst Christian Le Mière has most notably pointed out, this very perception of constabulary forces as a more diplomatic and less combative tool risks lulling everyone into a false sense of calm. In fact, ironic risks abound. First, the perception by a constabulary force that it is simply upholding its domestic law (and not playing power politics) reinforces the perceived justness and authority of any actions it may undertake against adversaries. Constabulary forces may be more willing to take aggressive and dangerous actions because they think that the law (or at least their law) is on their side.

Compounding this problem, constabulary forces may also underestimate the kinetic effects of their relatively weaker weapons and smaller boats, leading to a greater risk of miscalculation—both of the effects of any actions they take and the perception it will plant in the target. Constabulary forces’ political masters may decide that, because they sent a less provocative signal in the form of a coast guard, they can afford to send more vessels engaging in more clashes in a more aggressive fashion, under the mistaken belief that coast guards cannot start a conflict like navies can—another manifestation of the stability-instability paradox. And should dueling countries somehow manage to avoid this fate once, repeated encounters in the South China Sea between rival constabulary forces only increase the opportunity for something serious to break out due to misestimation and misperception.

A final reason for caution is the escalation risk posed by civilian vessels: since many constabulary incidents involve not only other countries’ armed forces, but also civilian vessels, the behavior of civilians not accustomed to any extant legal nuances and bureaucratic “rules of the road” may complicate and enflame crises (the 2010 East China Sea incident in which a Chinese fishing vessel captain was arrested for ramming a Japanese coast guard vessel, sparking a diplomatic row, is an example). Chinese examples from the South China Sea in the 2010s abound; they need not be repeated here, for the sake of avoiding tedium. But for all these reasons, one should not be so optimistic that introduction of more maritime constabulary forces in the South China Sea—or wherever there are maritime disputes, for that matter—would necessarily make things better. Just because something seems less provocative does not mean it actually lowers the risk of provocation.

But what if all the above risks could be avoided? Could not the Chinese and other coast guards somehow be able to operate in disputed waters peacefully without seeming to acknowledge others’ territorial claims? In the case of the South China Sea, this is harder than it appears, for while it is the China Coast Guard that currently grabs the headlines, it is simply the inner core of what analysts call the “cabbage strategy.” The PLA Navy sits over the horizon; indeed, one may speculate that Chinese constabulary forces have been able to be as assertive as they have been precisely because they know that their larger, deadlier cousins are not too far away. If the United States or other countries think that their constabulary forces can assert freedom of navigation and respective territorial claims without their own naval forces over the horizon, they are mistaken. A growing number of Chinese coast guard vessels are more capable than their Southeast Asian naval counterparts. Any de-escalatory signal a fellow claimant hopes to send to China by sending out a constabulary force will be disregarded, as it was at Scarborough Shoal.

Before a combination of continued Chinese construction and at-sea clashes, the Philippines’ appeal to the Permanent Court of Arbitration, and U.S. freedom-of-navigation patrols ushered in a new stage to this saga, I warned that the United States and others needed to respond earlier and more consistently to Chinese actions, lest feeble reactions lead to overconfidence and misperception on Beijing’s part. Alas, Washington and its regional partners find themselves in a more difficult situation today. The power imbalance between Beijing and its neighbors may help to explain why China is content for the moment to deploy its constabulary forces in the South China Sea—and why we see relatively fewer dangerous confrontations with Japan’s formidable maritime forces in the East China Sea. China has gotten away with so much already and is growing accustomed to exploiting its power imbalance.

This pattern of “China does something, the rest complain” may prime Beijing to react particularly harshly if and when the United States and regional partners finally mount a unified, consistent, and potent response to China’s activities and questionable interpretation of the law of the sea. Whatever the U.S. response—be it a constabulary presence, stepped-up naval activities or joint naval patrols with regional partners—one must not underestimate the continued risk of conflict in the South China Sea, regardless of whether the hulls are battleship grey or coast-guard white.

Brian C. Chao is an international relations doctoral student (Mellon Ethnopolitics Fellow) in the Political Science Graduate Group at the University of Pennsylvania and a contributing analyst on the Asia-Pacific Desk at Wikistrat Inc. His research interests include U.S. defense and foreign policy in the Asia-Pacific, the role of naval power and cross–Taiwan Strait relations.