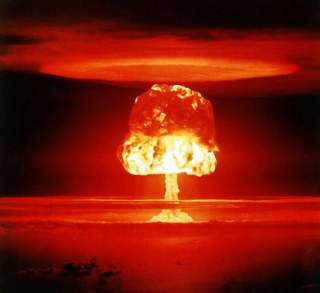 The first American astronauts had to show their "right stuff" in Atlas and Titan ICBMs converted from lofting bombs on to Moscow into lofting people into orbit. By all accounts, it wasn't the most comfortable way to ride into space.

But in 1952, the U.S. military considered launching men on real ICBMs to bomb Moscow.

The Bell Aircraft Corporation's Bomi (Bomber-Missile) would have used a rocket to send a bomber into space, after which the bomber made an unpowered glide back through the atmosphere and over the target. If this sounds familiar, it's because 30 years later, the Space Shuttle used the same concept.

As with much of Cold War rocketry, the idea traces back to the Third Reich, which not content with trying to conquer the world, also wanted to conquer space. The proposed A9/A10 was a multi-stage rocket that used a flesh-and-blood navigation system. "After cut-off of its engine at 390 km [kilometers] altitude and 3,400 m/s[meters per second], the A9 would re-enter and begin a long glide to extend the range," notes the Encyclopedia Astronautica. "The pilot was to be guided by radio beacons on surfaced German submarines in the Atlantic Ocean. After reaching the target the pilot would lock in the target in an optical sight, then eject. Death or internment as a prisoner of war would follow."

Given the number of German scientists who were brought to the United States (and safely out of reach of war crimes trials) to work on the fledgling American space program in its contest with Communism, it's not surprising that the idea was resurrected.

Bell proposed a two-stage rocket. The first stage, containing a two-man crew, would boost the second stage to orbital velocity and then glide back to base. The second stage, piloted by one man, would ascend into space, and then glide on to the target at a maximum speed of Mach 4 and a maximum glide of more than 4,000 miles. Its deadly cargo would be a 4,,000-pound nuclear bomb (presumably the pilot would eject). Another version would have would have delivered "two nuclear weapons in a linear aft-ejecting bomb bay as was being developed for the A-5 Vigilante," notes Encyclopedia Astronautica.

The Air Force had its doubts, especially over the Bomi's relatively short 4,000-mile range (the distance from Cape Canaveral to Moscow is 4,900 miles). But it was intrigued enough by the concept that it proposed the MX-2276 reconnaissance rocket-glider. In a declassified and highly detailed technical analysis, the Air Force estimated the glide range without bomb load would be 10,000 nautical miles (see page 2-2 in the analysis).

The Air Force later issued requirements for the WS-118P reconnaissance vehicle, which would have used a two-stage, Mach 15 rocket to boost a spy glider with a range of 5,000 miles,10,000 miles, or into orbit depending on the version.

Ultimately, the U.S. Air Force's space glider project became the X-20 Dyna-Soar in 1957, which would have served as a bomber or reconnaissance spaceplane. But cost, technical questions over finding the right rocket booster, and whether Dyna-Soar was a duplication of NASA's efforts, led to the program being canceled in 1963.

Perhaps the whole space glide-bomber concept was doomed to begin with. In many ways, it seems to echo the early Cold War debate over whether America's nuclear strike force should consist of bombers or missiles. The bomber barons fought to the last aircraft, and there is no doubt that a manned aircraft -- or rocket -- is more flexible than an unmanned ICBM. But ultimately, the ICBM proved the faster and more efficient way of delivering a nuclear weapon.

In this case, the machine functions better without a man inside it.