Colombia’s President Is No Friend to the United States 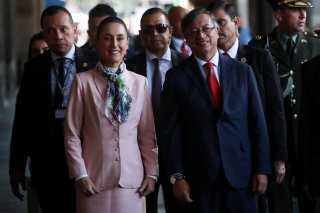 Gustavo Petro, Colombia’s president, former mayor of Bogotá, and one-time guerrilla leader, spent his presidential campaign distancing himself from the Maduro regime, going as far as to say that his Venezuelan counterpart represented “the politics of death” in an interview with Semana magazine.

Stating the obvious? Yes, but for those who remember the Latin America that enabled Chavez, the distancing was welcomed—this time it was different because this socialist stood for democracy. Or at least, that’s what some were led to believe, those who lived through socialism did not fall for it.

When challenged and compared, Petro would play the “refuse all the labels” game. In that same interview, he states that the term leftist is “anachronistic” and “European.” He calls himself a pluralist instead,  and goes on to explain that he is a believer in the “politics of life,” unlike the establishment that “kills young men.” When pressed about Maduro, he went on to say that the Venezuelan leader was a “very conservative member of the most regressive factions in global politics,” which like most of the previous statements, confuses more than they clarify.

Petro learned this from no other than Su Comandante Hugo Chávez. The late socialist tyrant, in an interview with renowned Peruvian journalist Jaime Bayly in 1998, stated that he wanted his policy to attract “American capital,” that he got “along with entrepreneurs,” and that he was even in favor of some deregulation. Most notably, like the Colombian president, when asked if he was a socialist, Chávez did what they are trained to do: deny, deny, deny.

“I am not a socialist, no! I believe that in today’s world, in the Latin America that is yet to come, we need to jump ahead. We go above socialism. We even go above wild capitalism, as Pope John Paul II calls it. I believe in a project that is, and this is how we call it here, humanistic; an integral project.”

If you ask many Venezuelans who grew up when Chávez was campaigning, they will tell you that he did not sound like a discombobulated caudillo or the Marxist-Leninist icon he eventually became. Those who paid attention to his actions knew that he was a leftist, but those enamored by his speech could not help but support the hopeful, eloquent, and moderate Chávez. For Venezuelans, Venezuela could never become Cuba, and for the newest countries led by members of the São Paulo Forum, becoming more like Venezuela may sound ludicrous.

That’s the point. Precision is not a priority, persuasion is, and most would not support a Maduro-enabler, so like his idol, Petro lied.

This is nothing new. Simón Bolívar was not wrong, after all; Latin America is pretty much “ungovernable.” As radical inequalities and shifts characterize their institutionality, the continent remains the perfect playground for mellifluous strongmen to succeed. In a way, the continent’s situational conditions determine the rhetoric that will electorally succeed, and without change, with an absent America, and a growingly present China, socialists will continue to dominate.

In Phaedrus, one of Plato’s Socratic dialogues, the philosopher explains that like soft animals, through “temporary pleasure and grace,” flatterers will advance their mischievous goals, without regard to good. In the United States, progressive journalists like Foreign Policy’s Catherine Osborn have fallen for it. They’ve been flattered. As Osborn pointed out in an article almost two months ago, there has been a change in tune among Latin American leftists who have a hard time justifying the conditions in Venezuela they perpetually praised.

Leaders like recently elected Luiz Inácio “Lula” da Silva in Brazil, who previously stood with the Venezuelan regime when the world condemned Chavista electoral meddling and labeled the corrupt Chávez “the best Venezuelan President in the last century, called for free elections in Venezuela. In Colombia, as noted by Osborn, Petro went as far as to deny a request made by Diosdado Cabello, the second most powerful government official in the oil-rich country, to send opposition activists back to Venezuela, tweeting that “Colombia guarantees the right to refuge and asylum.”

What journalists like Osborn fail to make clear is that aside from the words of these politicians, there is no evidence to suggest that leaders that have historically sided with murderous ideologues in opposition to American interests will enable prescient policy change in opposition to a regime that they have glorified in the past.

If anything, we are seeing evidence unfolding that points in the direction that survivors of communist Cuba and Venezuela warned us about.

On November 1, Petro and Maduro met in Venezuela’s Miraflores Palace, marking the first time a Colombian leader meets with his Venezuelan counterpart since 2016, and providing us with a strange occasion in which a foreign leader steps onto Venezuelan soil, something we have rarely seen since the brutal 2017 protests. Something we did not see during Iván Duque’s presidency, a man who refused to let Nicolás Maduro celebrate Petro’s victory on Colombian soil.

After reestablishing diplomacy and resuming trade with the autocrat, Petro thought it would be a good idea to travel to Caracas, shake some hands, and talk about a future of togetherness. An image that excites foreigners who think that talking it out is an effective strategy to deter authoritarians, but an image that frustrates Venezuelans who understand that, to answer the question raised by the New York Times’ Isayen Herrera and Julie Turkewitz, there is no way to normalize relationships with the Venezuelan regime without enabling its criminality.

Vice president of Government Affairs at Westwin Elements, Gregory Wischer, had some thoughts about these developments. He warned that “Latin America’s tightening relationship with China” is dangerous, and as such, we must act in ways that go well beyond mere cross-national dialogue.

In the last two decades, China has become South America’s top trading partner and a major source of foreign direct investment through its Belt and Road Initiative. According to Pepe Zhang at the Atlantic Council’s Adrienne Arsht Latin America Center, “China’s trade with Latin America and the Caribbean grew 26-fold” in the last twenty years. This alone should brood American policymakers, especially since today’s Latin America skews more to the left than it did during the so-called Pink Tide, with countries like Chile, Mexico, and Colombia strengthening their relationship with the Red Dragon.

For Wischer, it is evident that Chinese interest in the region is, by all means, a national security threat. As the development of infrastructure in the region demonstrates that the Asian nation is attempting to secure critical minerals throughout the continent that were once intrinsically tied to the interests of the United States.

As reported in the newly released US-China Security and Economic Review Commission’s annual report,  “[i]nvestments across critical mineral value chains in regions like Africa and Latin America give China significant control over supply chains for key minerals used to produce clean energy technologies such as lithium, cobalt, copper, and rare earths.” As China continues to strengthen its bonds with strategically-aligned, emerging leftist Latin American leaders, they have continued “[t]o gain access to mineral deposits in developing countries.” This is done with the use of “Chinese SOEs [to acquire] ownership stakes in mines around the world [to invest]  in mine exploration, processing and refining operations, and transport infrastructure.”

With this in mind, Wischer believes that “[t]he US must not play nice with countries that are developing tightening relations with China—not to mention those ruled by tyrants who play nice with North Korea, Cuba, and Russia, all of which are countries that seek to weaken and undermine the U.S. Thus, Latin America must not be overlooked when assessing global challenges to American security.”

What Wischer explains is what many policymakers and journalists have forgotten, the left-wing ideological successes in the south are not positive developments, political inclinations aside. The success of the São Paulo Forum in Latin America comes at a time when the United States is not only viewed in a negative light but now, China is seen as the only way forward.

It is one thing if a few South American leaders hate us, it is another if China meddles in our proximity to secure dependents, not allies, that will advance their primary objective: weakening the United States. Hence, today more than ever before, when it comes to Latin America, pressure, not compassion, is the answer. An absent America means a present China, and one does not need to be an expert to ponder what may occur when our neighbors grow antagonistic with the help of our most powerful adversary.

Juan P. Villasmil “J.P. Ballard” is a commentator and analyst who often writes about American culture, foreign policy, and political philosophy. He has been featured in The American Spectator, The National Interest, The Wall Street Journal, International Policy Digest, Fox News, Telemundo, MSNBC, and others.