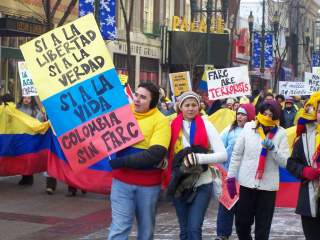 Beyond the whirlwind of U.S. politics, Colombian officials are racing to deal with another unexpected election result—the failure of Colombia’s October 2 plebiscite on a peace agreement with the Revolutionary Armed Forces of Colombia (FARC) guerrillas. Two piquant questions arise—how to make the accord palatable to those who voted it down, and how to get a new version approved. For now, the answer to both is to leave it to Colombia’s congress. That may be the most expedient way, but at issue is whether the Colombian public has been able to participate in a meaningful way in this important, historic decision.

President Juan Manuel Santos might have avoided trouble had he publicly discussed the government’s objectives when peace talks began four years ago. Still, the course Santos took to reach a demobilization pact with the FARC is understandable. It’s better to keep detailed bargaining strategies under wraps going into negotiations and juggling positions is easier when there are only two parties, without competing inputs from volunteer contributors or critics.

Then as negotiations proceeded in Havana, President Santos announced that he would submit the result to a public vote. He really didn’t need to, as his predecessor, Alvaro Uribe, bargained with paramilitary bands a decade ago and initiated demobilization mainly through legislation.  Yet after a ceasefire was declared in July and a definitive agreement was reached in late August, Santos announced a plebiscite, giving voters thirty days to understand the contents of the 297-page peace agreement.

As few were likely to read it, critics ranging from religious groups to former president Uribe were able to fill the information gap with their own interpretations. Polling, which indicated easy passage, took place mostly in cities where public opinion surveys are easy to do by phone.  They overlooked rural citizens—a quarter of the voting public.

When the plebiscite failed by less than a percent point, President Santos graciously acknowledged defeat, but immediately started culling criticisms from political opponents for changes to the accord that would tighten lenient conditions imposed on the guerrillas. The FARC, better known for their crime-financed rebellion, agreed to extend the ceasefire to December 31 and accepted the new, modified peace agreement on November 12.

Yet, uncertainty reigns. Former president Uribe is not satisfied that the new accord is tough enough. Nor are conservatives like former president Andrés Pastrana or ex-defense minister Marta Lucía Ramírez. Meanwhile, another guerrilla band, the National Liberation Army (ELN), wants to negotiate with the government. And in the background, the clock is running out on the Santos Administration. In April, cabinet officials seeking elective office in the 2018 elections will start resigning to begin their campaigns. Moreover, the Santos Administration faces a new international landscape without familiar interlocutors such as UN Secretary General Ban Ki-Moon and President Barack Obama.

Legislative action to approve parts of the new peace agreement remains a viable option. After all, lawmakers are supposed to represent citizens in a democracy. But opponents say that would work in Santos’s favor, whose party dominates congress. There is also talk of another plebiscite, a national poll of some sort, and even town hall meetings in each of Colombia’s 1,100 municipalities. It is not clear how any of this would improve understanding of what is now a 310-page accord or increase public participation in the dialogue and approval process.

The final interest for Bogotá politicians on all sides to consider is perhaps the most important. It is what rural citizens want, impacted as they have been by the FARC, ELN, vestiges of the paramilitary bands, and drug traffickers. These people will be at the center of reconciliation efforts. President Santos and the congress now need to listen to them to develop infrastructure, grow markets, build schools, and strengthen local decision-making so they can claim a stake in their own future and help former rebels develop democratic habits. The absence of such assistance helped prolong Colombia’s 52-year conflict.

Despite a fast-ticking clock, Colombia has a lot going for it—politicians who behave democratically and rebels committed (for now) to trade arms for peace. But the government and its critics will have to work quickly to achieve a broader consensus before the work of implementing a durable peace gets overtaken by other events.

Stephen Johnson was Deputy Assistant Secretary of Defense for Western Hemisphere Affairs from 2007-09 and is currently director of the Latin America and Caribbean division at the International Republican Institute.