Comeback Kid: How Winston Churchill Went from Oblivion to Glory 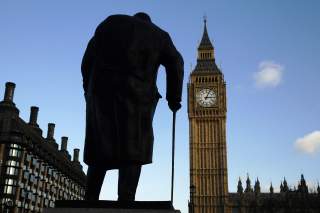 BOTH SERVED on the front-lines in World War I. Both had artistic aspirations. Both were popular authors. Both became leaders of their nations. But there the similarities between Adolf Hitler and Winston Spencer Churchill end. Hitler was an Austrian malcontent who bunked for several years in a flophouse in Vienna, then became a draft dodger after he abandoned his homeland to serve in the Imperial German Army during World War I. He was tapped by the army to serve as a right-wing agitator after defeat and surrender in 1918, but didn’t become a German citizen until 1932. Churchill, by contrast, sprang from the upper reaches of the British aristocracy and ended up saving Western civilization from the terrible menace posed by Hitler and the Nazis.

Much of his career was fueled by the intense desire to redeem the blot on the family escutcheon left behind by his father Lord Randolph Churchill, a young Tory radical who badly botched what should have been a glittering career. After a brief term as Chancellor of the Exchequer, he impulsively resigned his position, breaking with Lord Salisbury over a budget dispute. He never recovered his political footing and died of syphilis at age forty-five, leaving his relict, the American-born socialite Jennie Jerome, to embark upon a series of romances in coming decades. His son idolized him. But as the Liberal politician and historian Roy Jenkins pithily observed, “Churchill had 11 months in office and was without rival in attracting so much attention and achieving so little.”

Like his father, Winston got off to a fast start. He was elected to Parliament at age twenty-five in 1900. He became President of the Board of Trade three years later and Home Secretary in 1910, the youngest since Sir Robert Peel. When Britain went to war in 1914, he was First Lord of the Admiralty (a post that he resumed in September 1939, when Prime Minister Neville Chamberlain declared war on Nazi Germany). He was widely seen as a prime minister in the making. But then it started to look more like father, like son. Eyebrows were raised over his impetuous decision to dash off on a doomed mission to Antwerp and assemble a Royal Naval Division to assist Belgian forces in October 1914. “Winston is like a torpedo,” David Lloyd George said. “The first you hear of his doings is when you hear the swish of the torpedo dashing through the water.” By 1916, Churchill’s career appeared to be completely submerged after the fiasco at the Gallipoli peninsula in 1915, when his plan to knock the Ottoman Empire out of the war flopped, costing almost fifty thousand Allied lives. “Remember the Dardanelles,” was the catchphrase that dogged Churchill for years. Churchill resigned from the admiralty and accepted a token position as Chancellor of the Duchy of Lancaster before rejoining the Army to fight on the western front.

HOW DID he become the comeback kid of his era? In Oblivion or Glory, his engrossing and illuminating portrait, David Stafford, who is a professor of history at the University of Victoria, contends that 1921 was a seminal year in Churchill’s fortunes. There is often something slightly arbitrary about fixing upon a single year as decisive for a titanic figure such as Churchill, but Stafford makes a very good case that it was a pivotal moment for him. He not only saw a substantial boost in his finances thanks to the early death in a railway accident of a wealthy relative living in Ireland whose estate he inherited, but also was appointed Secretary of State for the Colonies. Stafford, who appears to possess an encyclopedic knowledge of Churchill and his wealthy friends such as Sir Ernest Cassel and Philip Sassoon, effortlessly surveys his activities, including presiding over a conference that redrew the map of the Middle East and negotiating a treaty to end the Anglo-Irish war, both of which presented him in a new light to the public, not as a reckless warrior but a judicious peacemaker.

It was Lloyd George who rescued Churchill from ignominy. He once observed that Churchill “would make a drum out of the skin of his own mother in order to sound his own praises,” but he had a keen appreciation for his dynamism and imaginative powers. Churchill, who was a staunch free trader, had abandoned the Conservative Party over his objection to preferential tariffs to join the Liberals in 1904. He went on to back Lloyd George’s People’s Budget of 1909, which imposed confiscatory taxes upon the aristocracy to fund social welfare programs. The Liberal party had ruptured in 1916 when Lloyd George replaced Herbert Asquith as prime minister. It never really recovered from this split. Lloyd George’s followers called themselves the National Liberals; Asquith’s, Independent Liberals. The latter controlled the party machinery and funds as well as the National Liberal Club which was located in central London. Lloyd George’s faction established their own organization known as the 1920 Club. It was created by Captain Frederick “Freddie” Guest, a cousin and political ally of Churchill’s who also supervised the creation of what amounted to a slush fund for Lloyd George by selling honors on a lavish scale. When it came to boosting Churchill’s political prospects, it truly was a case of all in the family.

Lloyd George always kept a wary eye on Churchill, but he stood by him, more or less. After Gallipoli, Clementine warned her husband that Lloyd George, who had temporized in his support for Churchill, was “the direct descendant of Judas Iscariot.” But after World War I, in the famous 1918 “Coupon election,” Lloyd George appointed Churchill Secretary of State for War and Air with a seat in the Cabinet. In his new post, Churchill targeted the fledging Bolshevik regime for destruction. According to Stafford, “During his two years at the War Office, he strained every nerve and tried every trick to destroy Lenin’s regime by supporting the anti-Bolshevik armies fighting in the catastrophic Russian Civil War.” In speaking at the Oxford Union, for example, he colorfully explained that Europe could never recover from the war while “these wicked men, this vile group of cosmopolitan fanatics, hold the Russian nation by the hair of its head and tyrannize over its great population.” He was not only horrified by mob rule, but also viewed Bolshevism as a bacillus that could putrefy the British Empire itself. Once the civil war in Russia petered out, Churchill’s hope for regime change resided with the recently created secret services, mi5 and mi6. But this was classic Churchill. With the backing of his fearsome secret police, the Cheka, Lenin had already established the foundations for a totalitarian state that Stalin would later build upon. Withal, Churchill’s secret service connections helped prepare him to recognize the vital assistance they could provide during World War II, not least the Bletchley Park codebreakers. All his life he viewed the services as the essential sword and shield of the state.

When it came to relations with Moscow, Lloyd George took a more phlegmatic view of matters than Churchill. He infuriated Churchill with his support for Greece against Turkey—Ankara was supposed to function as a bulwark against Kremlin expansionism—and for his refusal to expel Leonid Krasin, the head of a Russian trade delegation. Indeed, Lloyd George scoffed at Churchill’s apprehensions, remarking, “The Russians are prepared to pay in gold and you won’t buy.” In general, tempers were running high. Cecil Malone, a Communist member of Parliament, declared at a “Hands off Russia” rally at the Royal Albert Hall that hanging “a few Churchills and Curzons from the lampposts was a price worth paying for revolution.”

CHURCHILL MAY have reviled the Bolsheviks, but it was the Middle East that he focused on as head of the Colonial Office. The British Empire had vastly expanded after World War I. The League of Nations had handed as mandates to Britain the territories formerly ruled by the Ottoman Empire, including Palestine and Mesopotamia, as well as several former German colonies in Africa. Mesopotamia was made up of Basra, Baghdad and Mosul. Then there was Egypt, which British troops had occupied in 1882 and declared a protectorate. Overall, a million British and Indian Army troops now occupied territory reaching from the eastern Mediterranean shores to the Persian Gulf. Churchill’s own mandate, as it were, was to slash costs by reducing this enormous troop presence and relying instead on air power. “He consulted with civil service mandarins in Whitehall,” reports Stafford, “fired off telegrams to Baghdad, and kept the Foreign Secretary, Lord Curzon, informed since Mesopotamia had been a Foreign Office responsibility. Above all, Churchill made sure that Lloyd George remained on board.”

The final settlement with Arab and Palestinian officials took place at the Cairo conference in March, which was held at the Semiramis, a palatial Edwardian palace overlooking the Nile. Churchill was in fine fettle. With T.E. Lawrence and Gertrude Bell numbering among his advisers, he ran the conference in the mornings with brisk efficiency and devoted his afternoons to disappearing into the desert with his beloved canvas and paints. Churchill supported what became known as the “Sharifian solution”—the Hashemite family ruling Transjordan, Mecca and the newly created Iraq. At the same time, Britain retained its mandate over Palestine. Under the terms of the Balfour Declaration of 1917, Britain had promised the creation of a “Jewish National Home” that would not impinge on the rights of the non-Jewish communities. Churchill, who traveled to Jerusalem, came into conflict with Sir Herbert Samuel, the British High Commissioner for Palestine. Samuel opposed severing Transjordan from the rest of Palestine as an independent Arab state. Churchill had other views. According to Stafford, “Britain’s ‘Sharifian’ policy was in play, and he [Abdullah] could not be removed without bringing down the entire edifice of indirect British rule in the Middle East so carefully constructed over the previous five days.” In Jerusalem, Churchill made clear his fervent support for Jewish aspirations in remarks he delivered at a reception at the still uncompleted Hebrew University on Mount Scopus: “Personally, my heart is full of sympathy for Zionism.” Upon his return, he told the Cabinet that the Zionists had created “a standard of living far superior to that of the indigenous Arabs.” In June, he delivered a coruscating speech to the House of Commons detailing his successes in the Middle East that further helped to restore his luster.