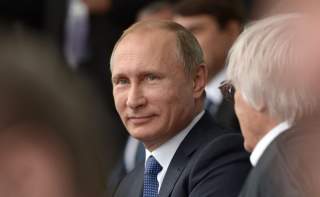 Vladimir Putin should have left the G-20 summit in Antalya, Turkey, in an upbeat mood. The Russian president clearly demonstrated that on the world stage he is neither isolated nor marginalized. His interactions with other key global leaders, both in the multilateral format of the summit as well as in numerous bilateral sidebars, showed, in the words of a headline in The Guardian, Putin’s dramatic transformation from “pariah” to “powerbroker” in the span of a single year.

It is telling that the most public rebukes delivered to Putin for the continuing crisis in Ukraine came from Canada’s newly elected prime minister Justin Trudeau. Other Western leaders indicate that they brought up the Ukrainian situation in their talks with the Russian president but the tone seemed to shift from last year’s unequivocal condemnation in Brisbane of Russian actions to one of “agreeing to disagree” on the situation today. Putin’s tete-à-tete with Angela Merkel, for instance, seems to have been focused more on technical aspects related to the full implementation of the EU-Ukraine association agreement and Russia’s likely trade response—as well as Russia’s apparent willingness to discuss restructuring Ukrainian debt—rather than on holding Russian feet to the fire on complete implementation of the Minsk Accords.

What’s more, Putin’s unscheduled lobby summit with President Barack Obama—and the release of images showing the two leaders in much friendlier poses than has been their usual wont—suggests that something has changed. Ukraine cannot also be reassured by signals that the so-called “Turkish Stream” pipeline—which appeared to be on the rocks even a few short weeks ago—may be back on track (albeit in a somewhat more reduced fashion and later on schedule), following Putin’s meetings with Turkish president Recep Tayyip Erdogan. (The real test will be whether actual progress is made during the next session of the Turkey-Russia intergovernmental commission meeting next month.)

It is, of course, the Syria crisis, with the related issues of migrants flooding Europe and the terrorist attacks last week in Paris (now connected with the earlier downing of the Russian airliner over the Sinai), which swept Ukraine off the agenda. In these areas, Putin has had important cards to play.

Already Russia’s foray into Syria achieved its first objective. The regime of Bashar al-Assad has stabilized and tightened its control over those parts of Syria still under its jurisdiction. In contrast to several months ago, no analysts are now proclaiming that Assad’s fall is imminent. Russian (and Iranian) support has made it impossible to dismiss Assad as a continuing relevant factor and player in Syria’s future. The Western powers—and other Arab states—have adjusted accordingly. Now, the emphasis has shifted to getting a political process in place that does not require Assad’s immediate departure from power as a non-negotiable first principle for getting a ceasefire in place—even if Washington, Paris, and Riyadh still maintain that Assad ultimately has no political future in Syria.

Having degraded the rebel groups most immediately threatening Assad’s immediate survival—Russian military strikes have now begun to focus more directly on the Islamic State of Iraq and Syria (ISIS). The Russian military is showing that it, too, can carry out some of the missions that were being conducted by the U.S.-led coalition—without having to operate under Washington’s aegis. In turn, Putin has ordered the Russian air and naval units operating in the Syrian theater to coordinate with French efforts to strike ISIS targets, holding out the possibility of coordinated joint Franco-Russian action in the future.

France’s president Francois Hollande is now calling for the formation of a grand coalition to fight and crush ISIS, and has positioned himself as the indispensable unifier who is attempting to bring together Washington and Moscow. Hollande’s announcement that he plans to travel to Moscow next week could represent the end of efforts to isolate Russia over Ukraine—and Hollande’s visit has leaders not only in Kyiv but in other parts of Central Europe concerned. While EU sanctions remain in place on Russia for now, they must be renewed every six months—and pressure may grow for partial relaxation or suspension of these measures, if not in January, then certainly by June 2016.

Depressed oil prices and other negative economic factors are still cause for depression in the Kremlin—but Russia’s geopolitical position has markedly improved over the last month (reflected in the current rally of the Moscow stock exchange).

Seven years ago, another French president, Nicolas Sarkozy, found a way for Europe to move past the Georgia war to restore relations with Moscow. Is Hollande seeking to do something similar? We’ll have a better sense in seven days.