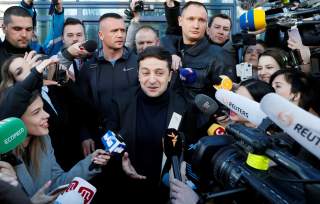 Ukraine’s long history of government corruption may be coming to a timely end—at the behest of a stand-up comedian. After a fiercely-contested campaign, beloved comic Volodymyr Zelensky has won more votes than Ukraine’s long-time billionaire president Petro Poroshenko, triggering a run-off election. If Zelensky were to become Ukraine’s president, then it would be no laughing matter; his presidency may offer Ukraine it’s best hope of saving the impoverished nation’s economy.

When the comedy star turned presidential candidate first nabbed a big lead over Poroshenko, he understandably caused quite a stir. My parents and relatives in Ukraine, for instance, have long enjoyed Zelensky’s humorous skits on the Ukrainian version of Saturday Night Live, but doubts remain about the political newcomer’s ability to reign in corruption and end the war against Russia backed rebels in the nation’s eastern regions. Nevertheless, it seems that Zelensky, much like President Donald Trump, has been able to mobilize his colorful publicity to strike a chord with the Ukrainian public.

Ukranians elected chocolate mogul Poroshenko after the 2014 “Maidan Revolution,” ousting pro-Russian former president Viktor Yanukovych on the heels of the bloody, five-month long riot. His presidency signaled the end of domination by a pro-Putin puppet, but it hasn’t brought improvements in living conditions or helped to curb a long legacy of corruption spanning back to the Soviet era.

In Ukraine today, as much as 50 percent of the national health budget is embezzled every year. Ukrainians say the expectation of bribery has gotten even worse in the past years, discouraging investment in small business and promoting a black market. The corruption has also impeded foreign investment in one of Europe’s poorest nations. For example, IKEA had to cancel its plans to open a store in the country after it couldn’t find the right government official to bribe. European Union President Claude Juncker has cited the legacy of corruption as one of the main roadblocks to Ukraine’s integration into the EU, which was a main factor behind Ukraine’s 2014 revolution.

With the Soviet culture of corruption intact, many of the same faces have cycled in and out of Ukrainian politics. Yulia Tymoshenko, who had had been Ukraine’s president before the pro-Russian Yanukovych, ran for the office again this year. She came in third, but after winning 13 percent of the voting bloc in a tight election, her endorsement in the run-off could help determine the outcome.

Poroshenko and Tymoshenko both come from the west of Ukraine, where most people staunchly support the endless war with Russian rebels to the east that has killed thirteen thousand people. The son of a close associate of Poroshenko’s has been implicated in selling the Ukrainian army over-priced weapons, leading some to decry the incumbent president’s hawkishness as self-serving. And that’s not the only whiff of corruption. Poroshenko was also revealed to have hid millions offshore in Panama as Ukrainian troops were being slaughtered by Russia-backed mercenaries.

On the other hand, Zelensky, the comedian front-runner, hails from eastern Ukraine, specifically my family’s hometown of Dnipro. Zelensky has called for an end to the conflict and wants to divert resources to help feed and employ citizens of the troubled nation. With closer personal and economic relations to Russia, eastern Ukraine is unsupportive of the costly war and has voted en masse for Zelensky. Many Ukranians blame the seemingly eternal conflict for many of the nation’s economic woes, including astronomical inflation and a depleted workforce due to the military draft.

But Zelensky’s hopes don’t end with halting the war, he wants to end the financial bleeding, too. Without a past in politics, Zelensky remains clean of any scent of corruption, and has staked his campaign on fighting the practice. Because corruption is such an impediment to Ukraine’s economic development and western integration, a concerted effort against the practice could prove valuable.

The question remains whether Tymoshenko will back Poroshenko in the run-off. Tymoshenko is likewise a hawk, but she has also criticized Poroshenko harshly for his appearance of corruption. She has between now and April 21, the date of the run-off, to choose a side.

But even an election upset by a reform-minded comedian may not result in serious political reform. While Ukraine has freed itself from Russia’s political grasp, the Soviet culture of kickbacks and embezzlement remains a daunting challenge for any future president, even one who has played the part of many of the country’s leaders on television.

If Zelensky does indeed win the election and manage to realize some of his promises, then it could be a significant milestone towards a more peaceful and prosperous Ukraine. By cracking down on corruption and diverting resources from the war, Zelensky could help set Ukraine on the path to realizing its dream of joining the EU. A comedian bringing change to one of the largest, and poorest, nations in Europe would be no laughing matter.