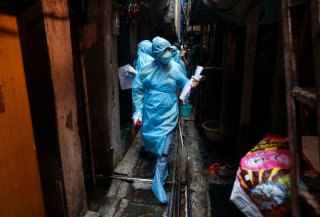 “A generation has died in just over two weeks. We’ve never seen anything like this and it just makes you cry,” lamented a funeral director in northern Italian city of Bergamo, the epicenter of a coronavirus (COVID-19) outbreak in recent months. As a testament to the scale of a historic tragedy unfolding at the heart of Europe, the city’s local newspaper, L’Eco di Bergamo, dedicated ten pages to obituaries on March 13. The head of respiratory unit of the city’s Hospital Papa Giovanni XXIII, Dr. Fabiano Di Marco, put it this way: “It’s like a war.” In fact, the Italian armed forces have been reportedly deployed to assist in the burial of countless victims across the country.

In an even more bizarre turn of events, China is now imposing strict restrictions on tourists and citizens returning from Europe and elsewhere. Instead of Beijing’s much-vaunted “One Belt, One Road,” what the world is confronting a “One Belt, One Plague” reality across the Eurasian landmass, stretching from China’s east coast to the Caspian Sea and the Mediterranean, if not the North Sea. The question, therefore is: What’s next?

With clear evidence of systematic cover up by Chinese authorities in the early stages of the emerging pandemic, a growing number of people around the world are seeking criminal accountability. A recent expose by the Associated Press, based on internal Chinese documents, shows that for almost an entire week in mid-January Beijing withheld information even when the true extent of the pandemic threat became crystal clear.

In a telltale of things to come, one group in Dallas is suing the Chinese government for $20 trillion in damages. In a recent report, titled “Coronavirus Compensation?,” Britain’s conservative think tank The Henry Jackson Society raised the possibility of a  £3.2 trillion  lawsuit against China on ten possible legal avenues, including the violation of International Health Regulations. Meanwhile, Germany’s largest paper Bild sent a symbolic invoice of €149 billion to China for damages caused to the European country.

The newspaper’s editor-in-chief Julian Reichelt lashed out at China’s President Xi Jinping, stating: “You, your government and your scientists had to know long ago that coronavirus is highly infectious, but you left the world in the dark about it. Your top experts didn’t respond when Western researchers asked to know what was going on in Wuhan. You were too proud and too nationalistic to tell the truth, which you felt was a national disgrace.”

Always eager to deflect accountability, the Communist Regime in Beijing seems to have anticipated the gathering storm of the greatest torrent of anti-China sentiments in recent memory by launching its own counter-offensive, including the bizarre claim that the contagion is an American biowarfare conspiracy. We don’t know what the exact trajectory of the pandemic will be, given the differential levels of responses by a complex array of institutions around the world. But what’s clear is that, geopolitically speaking, this is going to get very ugly in coming months and even years to come.

“I have seen the Future and it works,” declared the muckraker American journalist Lincoln Steffens following an exuberant visit to the Soviet Union on the eve of World War I. Overwhelmed by the grandeur of Stalinist utopian projects, Western visitors, who were largely and carefully confined to the Potemkin Villages, couldn’t resist elegiac reviews of the most self-conscious ideological project of the twentieth century.

Over the next decades, however, the rotten core of the Lenist-Marxist system became crystal clear. Politically, the Soviet Union’s invasion of Hungary, and later brutal suppression of the “Prague Spring” in Czechoslovakia, heavily undermined its supposed commitment to the freedom and independence of smaller nations. Aleksandr Solzhenitsyn dealt a fatal blow to the Soviet’s claims of moral ascendancy by exposing the indubitably bankrupt dystopian reality in Russia’s peripheries, above all the Gulags in the vast Siberian wastelands.

Economically, came the Great Stagnation, most apparent during the Brezhnev years, but rooted in white elephant projects such as the Trans-Siberia Railway plan, not to mention prohibitively unsustainable defense spending reaching above 60 percent of Gross Domestic Product (GDP) in mid-1940s and settling at around 20 percent until the twilight years of Cold War. The Chernobyl disaster, however, crystallized simmering worries about the fundamental integrity of the Soviet system of social organization.

Not long after the nuclear disaster, which threatened tens of millions in north-eastern Europe and beyond, the world entered Fukyama’s “End of History”, as the Soviet project slid into the dustbin of history as the last great ideological rival to Western civilizational project.

The coronavirus pandemic is China’s version of Chernobyl, though more ambiguously and more destructively. On the surface, China is no Soviet Union. It’s integral to the global economy, responsible for almost a third of global GDP growth in recent years. In many ways, it’s immanent to the functioning of universal capitalism. It’s bureaucracy, one of the world’s oldest, has been hailed for its emphasis on competence and dynamism, most famously by venture capitalist Eric Li. Unlike the Soviet’s largely isolated and extractive economy, China is the world’s factory and increasingly a dominant player in cutting-edge industries, including artificial intelligence.

So impressed are some by China’s strides in new-generation technologies that the Israeli historian Yuval Noah Harrari has postulated the dominance of digital authoritarianism in the twenty-first century in contrast to the decisive victory of the West’s Hayekian spontaneous organization in the preceding century. China is rich, prosperous and technologically advanced in ways the Soviet Union never war, or could ever become. As progressive thinkers such as Perry Anderson have pointed out, systemic dynamism was central to the Chinese communist revolution in ways its Russian counterpart never was. Others would argue almost ontologically, namely that China is just so vast, dynamic and complex that it remains largely unknown, including to its own ruling elite.

Throughout the first two decades of the post–Cold War period, China opportunistically sailed on the crest of American-led economic globalization. The upshot of this seemingly symbiotic Sino-Western dynamic was what Joshua Cooper-Ramo famously termed as the “Beijing Consensus”: namely, a post-ideological commitment to mercantilist “win-win” intercourse with the world, especially the post-colonial realm. It was not until the tale end of the Hu Jintao administration, which coincided with the Great Recession, that the we began to see a new assertiveness in Beijing, as the inheritor of a millennia-old imperial tradition began to carve out its own global Empire on the cheap. Instead of an “end of history”, what we soon got was President Xi Jinping’s, the world’s most powerful strongman, “Chinese Dream” and hopes for a “Great Rejuvenation” of the one of the world’s oldest empires-in-disguise.

Upon closer examination, China is the Soviet Union, but in a very specific and consequential way. Since the ascent of Xi, the country has appropriated Maoist politics with disturbing consequences for systemic stability. In particular, the massive purge of rivals, ostensibly on corruption charges, has unleashed a tsunami of fear and trembling, which has incentivized cover up and sycophancy like never before.

In the words of China expert Minxin Pei, “pathological secrecy hobbles the authorities’ capacity to respond quickly to epidemics,” because “[t]o maintain its authority, the Communist Party of China must keep the public convinced that everything is going according to plan. That means carrying out systemic cover-ups of scandals and deficiencies that may reflect poorly upon the CPC’s leadership, instead of doing what is necessary to respond.” This may explain the recurrence of epidemics in China, mainly thanks to reckless failure to rein in illegal and highly liberalized wildlife trade at home.

Crucially, China-based investigative journalists at Caixin Global have revealed that scientists were instructed to destroy the evidence of a new SARS-like virus almost three month ago—to the detriment of the whole world. As a Wuhan based journalist lamented, “Everyone must understand, first of all, that this epidemic was allowed to spread for a period of more than forty days before . . . any decisive action taken.”

To put the crisis into context, the Wuhan journalist explains, echoing Pei’s argument, “the main efforts undertaken by the leadership, and by provincial and city governments in particular…were focused mostly not on the containment of the epidemic itself, but on the containment and suppression of information about the disease.” Thus, the widespread outrage and calls for press freedom across China following the death of Li Wenliang, one of the “brave eight” heroes, who exposed the true nature of the epidemic threat last year.

President Donald Trump has come under repeated attacks for using the term “Chinese Virus,” instead of the politically correct coronavirus. What his critics, who correctly warn against fanning the flames of anti-Asian xenophobia, often overlook is that the pandemic is largely a responsibility of the Chinese authorities, especially in Wuhan. It’s not racist to point out the culpability of the ruling regime, in as much as we should stand in solidarity with ordinary Chinese people, who are as much, if not greater, victims of the contemporary system of repression