The Coming Green Imperialism in Europe 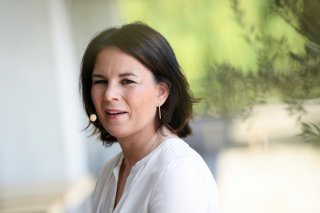 For those who are unaware, a quiet tectonic shift is happening in Mitteleuropa. The western media while relentlessly focused on “reactionary” trends in Hungary and Poland, is somewhat oblivious to the fact that the next German government might be led by a Green party. The Greens, led by sprightly Annalena Baerbock are surging, and are about to eclipse Merkel’s “conservative” Christian Democrats. While that might make some people unnecessarily happy, consider the fact that there are rumors that Merkel herself supports the Green candidate, over her own party, after her attempt to fix her successor failed. Jacob Heilbrunn notes that there are rumors that “Merkel would prefer to see Baerbock succeed her rather than a candidate from her own party.”

This is not the Green Movement of the seventies, and it would be foolish to reject them as one.

“I'm happy that we are an ally again and no longer a foe, as Donald Trump put it. I think Biden has rightly recognized that we face a global competition between democratic and authoritarian forces – between nations, but also within our democracies (emphasis mine). Biden acknowledges that we must fight authoritarianism at home and abroad and that our enemies, unfortunately, do cooperate quite well”,

says Franziska Brantner, of the German Green Party, arguing for more muscular U.S. military engagement across the globe, and a global crusade against “authoritarianism at home and abroad”.

German Greens, long opposed to U.S. militarism, virulently anti-American and pro-Soviet during the cold war, are now advocating for stronger U.S. militarism, in a debate with an American think tanker, who argues that the U.S. should let Europe pay for their security and cut down with global commitments. It might be enough to induce whiplash. And yet, it shouldn’t be, for anyone who has been reading Peter Hitchens since 2001. These are not our forefather’s Greens wearing colorful jackets protesting against nuclear power. These are committed radicals, who changed jerseys after the cold war from red to green and are now in the levers of power, determined to change the culture and character of a whole continent, by means of a top-down intervention.

This is not out of trend. It has also been going on for a while, across the Euro-Atlantic. Consider the following evidence. What thematic similarity binds the Dutch Green Parliamentarian Judith Sargentini, former CIA boss John Brennan, former MI5 spook Christopher Steele, and German anti-Brexit professor currently based in Scotland, Tanja Bueltmann? This group would look to normal people as random as any, and it is unlikely any one of them knows the other. And yet, they are similar in more ways than one. Judith Sargentini’s parents took part in what would be quite possibly Soviet-supported anti-Nuclear protests in the 1980s, and she herself was a member of the Pacifist-Socialist Party, before becoming a Green party member and eventually a member of the LGBT caucus in the EU parliament. She also spearheaded the EU campaign against “authoritarian” Hungary’s Viktor Orban, calling his anti-refugee stance as an affront to core EU internationalist values. Brennan voted for communists, and eventually turned against Russia, and supported the Maidan putsch in Ukraine. Brennan also orchestrated the anti-Trump and mostly anti-Republican movement, calling Trump authoritarian. Bueltmann has vociferously opposed Brexit while living and working in the UK, called for the breakup of the United Kingdom, and is proud of Internationale singing days of her Trotskyist youth. Christopher Steele needs no introduction to an American audience, as the prime pusher of the notoriously debunked Steel Dossier. He was also a student socialist.

Baerbock led Greens are in that same group. Their policies include transitioning all German energy to renewables. They are for a stronger, united, and ever-growing Europe, which in this case, means an EU, led by Germany. They are in support of a centralized strong German state intervention in the economy, and society. They are socially liberal, pro-LGBT, and transgender groups, and favor self-identification for fourteen-year-olds. Most interestingly, they are in favor of a continent-wide campaign against “far-right” groups.

It is not a conspiracy theory, to understand that all these people, while not acting in coordination, are ultimately ideologically similar, and their prime enemies are those who hold traditional and conservative views or are opposed to sexual progressive politics, and those, who, worst of all, support nationalism. All of them claim to be liberals or Greens now. All of them, remain committed to their progressive internationalist causes. A committed radical might hide his or her fanaticism, but they remain committed global revolutionaries and share the same flattening, egalitarian instinct. That’s why you have members of the German left calling for the increasingly woke American military to be the global arm of the continuing global revolution. Leftwing and evangelizing, they are fully inclined to use military and state power for social engineering and mark any ideological or political enemies at home calling them authoritarian.

The Greens are naturally getting favorable coverage from Foreign Policy to Al Jazeera, the Guardian as Europe’s post pacifist generation. Either that is a simplistic analytical mistake, or a deliberate portrayal of a group of people who are in positions of political and cultural power, but who remain intensely radical in their outlook. If the Greens win power in Germany, the biggest EU power will be led by committed social engineers, and one can expect a further deepening of tensions within the EU, between traditional forces led by Hungary and Poland, and an intensely socially left-wing and imperialist European Union.