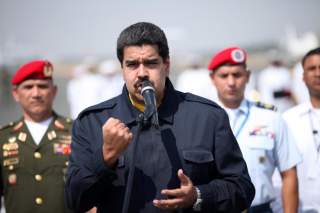 Each time there’s an election in Venezuela, the “Chavista” regime performs a weird type of geopolitical striptease, gradually revealing to the world its most-intimate parts. The result is to repel, rather than seduce.

The regime headed by Nicolás Maduro is doing it again in anticipation of the upcoming parliamentary elections, which will take place in early December.

If the election results were to reflect the advantage the opposition now enjoys in popular support, it would constitute a major turning point for that country. But that’s unlikely.

The comptroller-general, who is supposed to represent the citizens’ interests, but instead is a lackey of the president, has barred key opposition leaders from running for office. Among the disqualified candidates are political prisoner Leopoldo López, María Corina Machado, who was expelled from the National Assembly (the legislature) a couple of years ago, two former mayors—Daniel Ceballos and Vincenzo Scarano—and Pablo Pérez, the governor of the oil-rich state of Zulia. They are all facing trumped-up charges and will not be able to participate in elections for years.

The government also has changed the election rules, imposing an electoral quota for women, which will disqualify other candidates. The quota was announced one day after the opposition, which had formed a united coalition, made public its list of candidates in most assembly districts—all of whom had won credible primary elections. The regime doesn’t want any part of such a contest.

The Maduro government also has turned down offers by several international organizations to send election observers. Maduro could not have marked his territory more clearly: “Venezuela will not be monitored by anyone.”

Diosdado Cabello, the National Assembly president who has been linked to drug trafficking, showed his contempt for such offers by throwing a letter from the president of the European Parliament, Martin Schulz, in the trashcan.

Elías Jaua, Venezuela’s minister of foreign affairs, has called the secretary-general of the Organization of American States (OAS), Luis Almagro, “a traitor” and “an enemy of Venezuela” for meeting opposition leader Henrique Capriles, who had traveled to Washington to request OAS observers.

In a preemptive move against Spain, which also has offered election assistance, Maduro launched a personal attack on Prime Minister Mariano Rajoy for his support of the EU’s tough rescue package for Greece, calling him a “hitman” and a “thug.” Almagro, who Venezuela had supported earlier this year when he ran for the OAS post, was called even worse.

Maduro and his cronies in the National Assembly know two things. First, they know they will lose a free election. Datanálisis, a respected polling organization, has predicted that the opposition likely will win twice as many assembly seats as the “Chavistas” in a free election. Maduro also knows, however, that the international community can’t do more than it already has to assure such an election.

How the Venezuelan government operates is no secret. It has been exposed and denounced by virtually every legitimate human- and political-rights organization that exists, from the UN Human Rights Council’s Working Group on Arbitrary Detention and the Inter-American Human Rights Commission to Human Rights Watch—all to no avail.

It hasn’t helped because Maduro’s simple strategy—the same strategy used by his long-time mentor, the late Hugo Chavez—is to defy the world at all cost, with help from Cuba, which knows a thing or two about political longevity.

Venezuela’s election, therefore, should not be seen as a decisive moment in the struggle for freedom. The outcome is being rigged even as I write this.

Nevertheless, it is an election worth fighting, so long as the opposition and the international community understand that it is an important step in the long march towards liberty.

Alvaro Vargas Llosa is a Senior Fellow at the Independent Institute, Oakland, Calif. His latest book is “Global Crossings: Immigration, Civilization and America.”