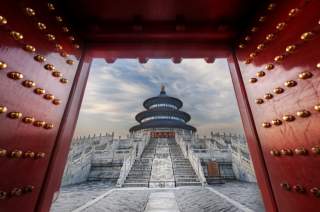 By 2022—and probably sooner—India will overtake China to become the world’s most populous state, a status the latter has held for at least three centuries and perhaps for all recorded history.

And once the Chinese nation loses its demographic crown, it will fall fast. The country’s population will peak in 2028 according to the UN’s “World Population Prospects: The 2015 Revision,” released at the end of July. China in its peak year will have 1.42 billion people. By the end of the century, the country will be just a smidgen over a billion—and very, very gray.

India, on the other hand, has a bright demographic future. No country will contribute more to global population growth between now and 2050. And the Indian state will continue to grow well into the second half of the century. India, according to the UN, will peak in 2068, when it will be home to 1.75 billion souls. That year, China is projected to have 541 million fewer people.

China will also be behind where it counts, workers. India’s workforce—people aged 15 to 59—will overtake China’s within a decade. By mid-century, there will be 1.05 billion Indians of working age, 375 million more than the Chinese in the same age group.

Moreover, India’s demographic profile will be close to perfect. By 2050, its median age—the point where half the population is younger and half older—will be a youngish 37.3 versus China’s 49.6. Then, the percentage of people 65 and older will be 27.6 percent in China and only 13.7 percent in India.

The subcontinent is in a demographic “sweet spot,” the term Credit Suisse’s Robert Prior-Wandesforde used in comments to CNBC, when he pointed out that “India has close to ideal demographics.”

China, on the other hand, is experiencing accelerating demographic decline. Case in point: the crossover time of 2022 is six years earlier than the previous UN estimate. That previous estimate was issued just two years ago.

Because UN numbers are derived from figures the nations themselves supply, the trends could be even worse for China than the world body suggests. Beijing’s figures, not surprisingly, tend to mask its decline.

For example, the 2015 Revision, as noted, predicts China will peak in 2028. That’s unlikely, however. The high point will, in all probability, be closer to 2026, as the U.S. Census Bureau estimated a half decade ago, or 2025, as leading Chinese demographer Li Jianxin predicted. It could even be as early as 2020. That’s the year senior Chinese official Liu Mingkang, speaking at the Asia Global Dialogue in May 2012, admitted growth will end.

Changes in the workforce show similar fast erosion. The number of working age Chinese peaked in 2011 according to the official National Bureau of Statistics. As recently as the end of last decade, Beijing was predicting the highpoint would not be reached until 2016.

China’s now-intractable demographic troubles are the inevitable result of two contradictory population policies. Mao Zedong, the founder of the People’s Republic, had an expansive vision, wanting as many Chinese in the world as possible. His pro-growth policies resulted in a total fertility rate—generally, the number of births per woman—of 5.9 in the early 1970s.

The high-fertility, of course, was unsustainable, and toward the end of Mao’s rule Beijing adopted the mostly voluntary wan, xi, shao—“late, long, few”—program to limit runaway growth.

The program halved the birth rate in less than a decade, but that was not enough for the next Chinese leader. Deng Xiaoping rolled out the one-child policy, termed the world’s most draconian social experiment, in 1979 and 1980 as one of his first initiatives after assuming power.

Chinese leaders now congratulate themselves for this “policy,” which they credit for preventing 400 million births, yet Beijing has progressively relaxed one-child rules in recent years. For one thing, it’s clear the obsessively enforced program created demographic abnormalities, a horrendous gender imbalance and the almost complete disappearance of aunts, uncles, and cousins.

Another problem has been the policy’s adverse economic effect. China prospered during its so-called “reform era”—the decades following the Communist Party’s historic Third Plenum of 1978—largely because the country was propelled by the “demographic dividend,” the enormous bulge in the workforce caused by Mao’s and Deng’s population policies.

The dividend has already been pocketed, and a shrinking workforce will be wrenching for China for the rest of this century and beyond. The declining number of workers does not ensure a contracting economy, but it means Chinese leaders will have to succeed in spite of demography instead of being propelled by it.

India, on the other hand, will have a different type of challenge. It is often said that New Delhi will have to provide for its population, but that’s the wrong way of looking at the situation. In reality, all the Indian government need do is step out of the way of its ambitious, talented, and restless people, removing legal, institutional, bureaucratic, and social barriers that have impeded them since independence, in 1947. That’s what the charismatic Narendra Modi, a reformer when he was chief minister of the state of Gujarat, has set out to do since becoming prime minister in May 2014.

Modi talks about our time as “India’s century,” challenging the notion held by many Chinese that they own this era. There is almost a sense of entitlement in China, that because of its population it is destined to sit atop the world.

Many Chinese believe, understandably, that with population comes heft and with heft comes influence. “More people means more power,” wrote “Fang Feng” on the Strong Country Forum of the Communist Party’s People’s Daily a half decade ago. “This is the truth.”

The truth is that China will soon race pass an inflection point. “When you see a country’s population decline, the country will definitely degrade into a second-rate one,” says Yao Yang of Peking University’s China Center for Economic Research.

Will Beijing, before suffering decline, try to undermine India to prevent it from realizing its demographic potential? At the end of last decade a number of Chinese security analysts proposed taking on New Delhi while they still had the upper hand. For instance, in August 2009 Zhan Lue, a Chinese strategist connected to the Ministry of National Defense, suggested Beijing try to break up India into as many as 30 independent states. Zhan’s article, widely circulated in Chinese policy circles, resonated among hardliners.

Since then, Beijing appears to have continued support to insurgents in India. Recently, Indian intelligence agencies and some in the Indian army contended that the senior leaders of NSCN-Khaplang, which was behind the killing of 18 Indian troopers in Manipur in early June, have ongoing contacts with China’s People’s Liberation Army. There are even suggestions that the PLA had urged the militants to break the ceasefire, thereby encouraging the killings.

For decades, Beijing’s policy toward New Delhi has been driven by a desire to keep a possible peer competitor down. The risk for India is that in coming years the Chinese, due to plunging demography, will become even more insecure and ramp up efforts to target the Indian state.

The Chinese take great pride in their position at the top of the population rankings, so the next few years are bound to be traumatic for them, which is another way of saying we could be entering a time of high drama.

Beijing, unfortunately, just might not be ready to concede that the century belongs to another nation—India—no matter what demographic trends suggest.