The Complicated Combat Future of the U.S. Air Force 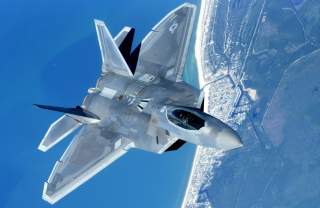 For the last thirty years, the U.S. Air Force has operated with freedom from a serious attack against our main operating bases. During that time potential adversaries including the People’s Republic of China and Russia implemented a strategy to prevent the massing of airpower near their borders. This Anti-Access/Area Denial strategy relies on a potent Integrated Air and Missile Defense System combined with large quantities of cruise missiles and ballistic missiles to hold our main operating bases at risk. As in military developments throughout history, there is a pattern of measure and countermeasure. To counter this strategy, U.S. forces, along with U.S. allies and partners, must learn to fight within the threat umbrella.

While designing a defense for the air bases to protect personnel, equipment and supplies is a necessity, for the actual aircraft, given their relative fragility, the best defense is not to be on the ground when the strike occurs. Even with the large inventories of missiles being produced by the PRC, Russia and others, they are still a finite quantity and insufficient to persistently attack and deny all airfields in a theater at all times. Therefore, any strategy operating within the threat umbrella must incorporate the maneuver of air forces.

Joint Doctrine describes maneuver as “the employment of forces in the Operating Area through movement in combination with fires and information to gain a position of advantage in respect to the enemy . . . Through maneuver, the Joint Force Commander can concentrate forces at decisive points to achieve surprise, psychological effects, and physical momentum. Maneuver may also enable or exploit the effects of massed or precision fires.

At the operational level, maneuver is a means by which [Joint Forces Commands] set the terms of battle by time and location, decline battle, or exploit existing situations. Operational maneuver usually takes large forces from a base of operations to an area where they are in position of operational reach from which to achieve operational objectives.”

Maneuver is far more than just the dispersal of assets. The JFC can use maneuver to set the terms of engagement, to advance or decline battle. By maneuvering forces among multiple locations, the JFC is able to defeat or delay the adversary’s ability to find and destroy coalition air forces. Meanwhile, by massing air forces and effects through the flexibility and speed of airpower, the JFC can gain positional and operational advantages to prosecute the air and joint force campaign. By moving often and unpredictably, the JFC can increase the uncertainty volume for the adversary commander to decide when and where to allocate missiles. As long as air forces are able to get airborne prior to weapons effects on their airfield, the JFC can frustrate the adversary’s attack and deplete their precious resources.

The Future of Operational Maneuver

Joint concepts of operational maneuver differ significantly from operations the U.S. Air Force has conducted over the last thirty years. While the air service has prided itself on being flexible, tailorable and expeditionary, airmen have done so from large main operating bases and, once deployed, have remained at the same base with hard billets, just in time logistics, complete maintenance capabilities and full complements of base support and services.

In the era of modern air operational maneuver, flights of aircraft and associated personnel may not be collocated with squadron or wing leadership for weeks at a time, increasing the emphasis and need for lightweight and secure communication capabilities.

Additionally, in an era of contested communications and cyber connectivity, logistics will have to transform from a pull system where units requisition parts, to a push system where predictive analysis drives supplies forward to the operational edge to be disbursed via tactical lift.

Operational maneuver of air forces will require more airfield capacity than before which drives a whole-of-government effort to gain access to the bases around the globe. It will also require smaller support packages with multi-capable airmen who can perform multiple roles under an organizational structure more tolerant of risk. It will require command and control organizations and equipment that enable procedures to task, account for and predict theater-wide movements in real-time.

Forces will need to understand the commander’s intent and then be able to execute within their mission orders and conditions-based authorities. Additionally, the air tasking cycle will likely need to be modified to longer periods of coverage to counter periods of cyber disruption.

These efforts may be relatively simple to support a four-ship of fighters, but airmen must imagine maneuver in terms of thousands of sorties per day to include transport, intelligence, surveillance, and reconnaissance, strike and refueling missions to support joint assets, allies and partners at more than one hundred airfields.

In fact, it will require adjustments, some larger than others, across the spectrum of doctrine, organization, training, materiel, leadership, personnel, facilities and policy capabilities.

Recognizing the need to maneuver air forces and deny completion of an adversary’s kill chain has directly led to the development of the operating concept of Agile Combat Employment (ACE). ACE focuses on the ability to disperse, recover and rapidly resume operations in a contested or austere environment. It is a modern, cross-Major Command (MAJCOM) effort facilitating a shift away from the hyper-efficient, specialized operations of recent decades towards the redundancy, resiliency, decentralized control and decentralized execution required to enable an effective campaign against a near-peer adversary.

Originating from multiple component commands, functional commands and headquarters initiatives, ACE has quickly evolved into an Air Force-wide focus. ACE and the Headquarters Air Force concept of Adaptive Basing in Contested Environments outline the mindset critical to sustaining combat operations within the threat envelope of a peer competitor’s forces. Regardless of a MAJCOM’s theater’s distinct tactical and operational challenges, fundamental requirements for operational maneuver exist, and the MAJCOMs consolidated this common core and other emerging initiatives under a singular ACE banner in 2019.

Today, the synchronization of ACE continues across all MAJCOMs to institutionalize foundational capabilities as an enterprise with the ability to tailor specific skill sets in response to unique theater requirements. Lines of effort focus on evolutionary needs ranging from defining a common lexicon and reforming the command and control of logistics, to developing cross-functional personnel skills and designing lighter and leaner support equipment for smaller logistical footprints. ACE skills development ranges from the large-scale training of fielded forces across a MAJCOM’s Area of Responsibility to plug-and-play frameworks designed by force providers to support a variety of theater requirements.

Mission-type orders and other enablers of historic operational maneuver like the Pacific Campaign in World War II are reborn in modern-day theaters, where enduring geographic challenges are juxtaposed with cutting edge technologies, new domains, and a complex information environment, are fundamental to conflict in the Information Age. All efforts underscore the need to revitalize the Air Force’s core capability of operational maneuver.

While the Air Force is headed in the right direction with the adoption and implementation of the ACE concept, it’s not enough. To compete in this era of great-power competition, we must rapidly advance these efforts on an operational scale in order to effectively win before fighting, but if required, fight and win as a joint force.