Confirmed: The Hawks Were Wrong on Iran 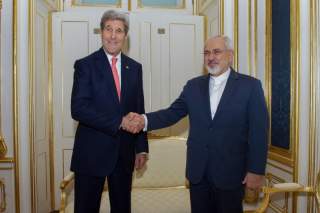 Peace won. War lost. It’s as simple as that. Make no mistake, the framework agreement that was announced yesterday is nothing short of historic. A cycle of escalation has been broken – for the first time, Iran’s nuclear program will roll back, as will the sanctions Iran has been subjected too.

In 2003, as I describe in Treacherous Alliance - the Secret Dealings of Israel, Iran and the US, Iran only had 164 centrifuges. It offered to negotiate with the United States, but the George Bush administration refused. “We don’t talk to evil,” Vice President Dick Cheney quipped in response to the negotiation offer. Instead, the Bush administration resorted to threats of war and sanctions.

Iran, in turn, expanded its program. By 2005, it had 3,000 centrifuges. Again, it sought negotiations and offered to stop expanding its nuclear program. Again, the United States refused.

By the time President Barack Obama came to power, the Iranians were operating around 8,000 centrifuges. After his initial, limited attempt at diplomacy failed, Obama embarked on what was called the pressure track – sanctions. As the United States ramped up unprecedented sanctions, Iran accelerated its nuclear activities. By end of 2013, Iran had 22,000 centrifuges. It had a large stockpile of both low and medium enriched uranium. It had mastered the fuel cycle. It was closer to a breakout capability than ever before.

Until diplomacy begun in earnest – much thanks to the commitment of President Obama and the election of Iranian President Hassan Rouhani.

It’s only now – thanks to their persistent and tireless diplomacy – that the growth of the Iranian nuclear program has not only been stopped, it has been reversed. This is the first time that the number of centrifuges Iran operates will have been reduced. No other policy has achieved this. The critics can’t touch this.

They have not only been wrong in how to handle the Iranian nuclear program – they have been wrong on almost anything about Iran.

The critics said Iran would never honor its word. They were wrong. The IAEA has consistently attested that both the United States and Iran have lived up to their commitments. President Obama himself pointed this out today – a rare praise by the U.S. president of Iran.

The critics said the Iranians would only play for time. They were wrong. Both sides negotiated with sincerity. If the Iranians just wanted to negotiate in order to shift the blame onto the Unites States and escape international pressure, they had the best chance to so when the 47 U.S. senators committed in writing that they would undo the agreement. Iran could have walked away from the table. Much of the international community would not have blamed Iran for it. But Iran didn’t do this. Instead, the Iranian negotiators sacrificed their Persian New Year’s holidays and continued negotiating.

The critics said this was taking too long. They were wrong. Arm limitations agreements have taken an average of 1,120 days – that’s three years. The average for all agreements is 899 days.  That’s 2.4 years. The Iran deal has taken only 1.5 years thus far. That’s faster than both general agreements and arms reduction deals.

The critics said Iran could never strike a deal with the United States because of Iran’s supreme leader and because of Iran’s state ideology. Again, they were wrong. As I explained in The Atlantic last week, Ayatollah Ali Khamenei has always kept the door open for talks if it benefitted Iran’s national interest. And right now, while hardliners in Washington are seeking to kill the deal – as Bill Kristol put it – Iran’s hardliners are framing the deal as a win for themselves and for their ideology.

Much remains to be done. Obama has not yet won the battle in Congress. It will not be an easy task. But he has one major advantage – he has truth on his side because everything the critics said turned out to be wrong. And everything he has cautiously promised he has thus far delivered on.

After all, true leaders know that history will not judge them for the petty and desperate criticism they faced, but for the courage they showed in grasping for a peace that appeared beyond the possible.