Confronting This Crisis Could Unite America under Trump 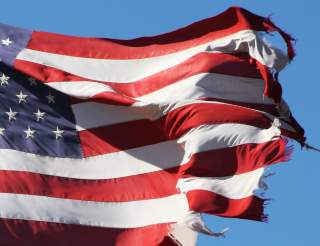 Forget the first one hundred days. The frenetic pace of executive orders coming from the White House cannot be sustained over four years. The Trump administration needs to start identifying bigger issues to tackle, those that will take months, even years, to solve. All the better if the president’s approval numbers are bolstered by having the issues be readily appreciated by a broad range of Americans. That means the issues should be domestic, bipartisan and well executed. As one prominent Republican official from the George W. Bush administration recently tweeted, “Pres Trump would be wise to slow down & get right things done right. Presidencies judged by 4 year not 4 week record.”

Yes, charging out of the gate has been a practice of presidents for most of the last century. Administrations have known that time is limited and momentum quickly swings back in favor of the other party. In fact, going back to President Harry S. Truman, every president’s party has lost seats in the House or Senate in the midterm of the president’s first term. The one exception is George W. Bush, who saw modest gains in both the House and Senate for Republicans in 2002. Coming so soon after 9/11, however, this midterm took place under the shadow of unusual—and one hopes unduplicated—circumstances. Otherwise, since the 1940s, the trend has held.

Yet this time is different. The 2018 midterm is unprecedented in its advantages for the president’s party. Only one Republican senator is up for reelection in a state won by Hillary Clinton in 2016, but ten Democratic senators are up in states Trump won. A Republican supermajority in the Senate is in sight. Looking at the 2018 map, the Washington Post summed up, “It's not just that Democrats have so many vulnerabilities. It's that Republicans have so few.”

The Trump administration and congressional Republicans, then, need not just a one-hundred-day strategy, but a one-hundred-week strategy, one that will carry them into the 2018 midterm in good standing with the American people.

What would a one-hundred-week strategy feature? One issue stands out as a perfect centerpiece. It’s domestic and potentially bipartisan. It’s the opioid epidemic, which is gutting much of middle America. While auto accidents, firearms and opioids each kill roughly the same number of Americans each year, only opioid overdose deaths have increased fourfold since 1999. Nearly a hundred Americans die from opioid overdose every single day.

Opioid addiction is an issue ripe for Republican leadership. Nikki Haley, the current U.S. ambassador to the UN, sought solutions when she was governor of South Carolina. She appointed a special council to come up with actionable, effective policies to pursue and began putting those policies in place. Conservative writer J. D. Vance, author of the celebrated Hillbilly Elegy, has movingly described the difficulties growing up in a region where opioids tear families apart. “This is not a problem immune to public policy,” Vance has argued. President Trump has touched on the issue of addiction more broadly. In a 2013 interview with the Financial Times, Trump spoke about why he does not drink. “I’ve seen over the years too many people who have destroyed their lives with alcohol,” he explained. Today, it is not only alcohol but also—and increasingly—opioids with which Americans are destroying their lives.

While the regions where opioid addiction is worst tend to vote Republican, this crisis affects both blue and red America. Here the Trump administration could chalk up a bipartisan win by working with, for example, Democrat Sen. Joe Manchin of West Virginia, with whom the president already has a rapport. West Virginia is the state hardest hit by drugs. It had the highest rate of deaths from overdose in 2015.

There’s no silver bullet. Fighting this epidemic requires empowering law enforcement with the resources to fight pill mills. It requires ending the import of the deadly synthetic opioid fentanyl from China. It requires negotiating ways to cut the rising cost of the lifesaving drug naloxone, which can reverse an overdose if administered in time. It requires seeking out and following the advice of independent experts, which Haley did as governor. It requires a raft of other measures as well. More than anything, it requires President Trump drawing attention to the issue. When the president speaks or tweets on an issue, any issue, his words are amplified a millionfold by the media and public. His is an unrivaled pulpit from which to add urgency in addressing this crisis.