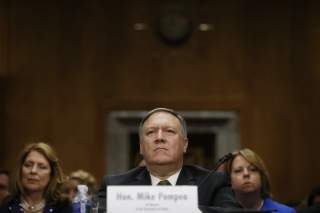 “I have a secret and dangerous mission. Send me a West Point football player.” So, Gen. George C. Marshall, America’s architect of victory in World War II, is alleged to have said. Himself a graduate of the Virginia Military Institute, Marshall was a shrewd judge of leadership.

I’m not sure what sports Mike Pompeo played when he was at West Point, but his many years of public service certainly reflect the academy’s motto, “duty, honor, country.”  His latest venture, coordinating the summit between the president and the leader of the DPRK, is no exception.

On the one hand, there is nothing exceptional about backdoor diplomacy. And, it is not unusual for a president to trust a mission to someone who doesn’t work in Foggy Bottom. Most famously, in 1971, Henry Kissinger travelled secretly to Beijing while serving as national security advisor. That trip paved the way for Nixon’s historic visit to China.

On the other hand, high-level diplomacy with Pyongyang is anything but business as usual. It’s been two decades since a senior American official met with high level leaders from North Korea.

That the president trusted Pompeo with the task reflects the president’s trust in Pompeo. That ought to be reason enough to rush to get the former congressman and current CIA director in place as the next secretary of state.

By every credible measure, Pompeo is more than qualified.  It is really hard not to mark opposition to his appointment as much more than rank partisanship and posturing.

It is also hard not to see dragging this out as inappropriate. In addition to meeting with “rocket man,” the president will have to cross several other major diplomatic speed bumps in the next few months—including decisions on the Iran Deal and the NATO Summit. The president ought to have his secretary of state on call for these occasions. It is particularly galling to see senators snipe at the White House for not having a full diplomatic team in place and then quibble over a senior appointment.

Pompeo is needed, in part, because the diplomatic dance with Pyongyang is just beginning.

There is perhaps less to worry about on the U.S. side—as long as the US and its allies maintain maximum pressure (nuclear deterrence, missile defense, conventional deterrence and stiff sanctions) until the DPRK is no longer a nuclear threat, the United States risks little in its diplomatic engagements.

The United States, however, isn’t the only negotiating party. Fortunately for us, there is a stronger convergence of strategic interests among America, South Korea and Japan than there is among North Korea, China and Russia. Our diplomatic effort needs the keep that advantage intact. Pompeo seems well suited to the task.

There is an important diplomatic task to be accomplished here, one that’s better handled out of Foggy Bottom than from the White House. U.S. and South Korean diplomatic efforts must remain synchronized. Seoul’s unification minister has said the two leaders’ agenda will cover three main areas: denuclearization, establishing a permanent peace, and improving inter-Korean relations. That’s fine as long as the desire to make a deal doesn’t produce the “same-old, same-old” whereby Kim gets something for nothing.

We need strong coordination between Washington and Seoul prior to both summits. It would be nice if Trump could have his secretary of state lead that effort.