Congress Has Chosen the Wrong Strategy to Deal with Russia 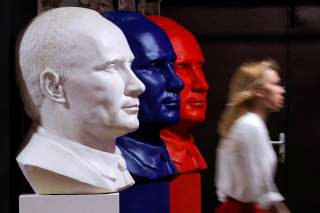 A recent editorial in the Economist magazine simultaneously reveals both the intellectual shallowness of the new Cold War and its source of inspiration. It does so by tying together three points that have become staples of the current mind-set about Russia.

The first, is that post-Communist Russia is even worse than the USSR. While the Soviet Union promoted Communism, that was at least a political ideal. Modern Russia, by contrast, only projects cynicism (the more correct term here would be “nihilism”). It does so in order to make its own cynical leadership look better by comparison. Portraying Western leaders as self-serving and cynical is very important to Vladimir Putin because, despite every polls showing that he is overwhelmingly popular, the Economist is quite certain that Russians would otherwise look to the West for political guidance and inspiration.

The second revelation is that the Russian media company RT, the object of so much fear and loathing in Washington, does not actually seek to influence its viewers at all. It really only wants to draw a reaction from the Western establishment. RT is therefore simply delighted that Russia is portrayed as a menace, because that makes Putin more important in Washington.

This strikes me as rather disturbing news, since it leads to uncomfortable questions about why the U.S. Congress is so eager to play along with Putin’s strategy.

But, be that as it may, Putin failed to anticipate the devastating U.S. response—"the policy of no positive agenda." By refusing to negotiate anything, Western leaders cannot be blackmailed into conceding anything to Russia. Thus, the editorial approvingly concludes, "After two and a half decades of inflated hopes and expectations for peaceful coexistence, America is back to its old cold-war policy of containment and deterrence."

If this sounds eerily familiar, it should. It is the playbook that Ronald Reagan used during his first two years in office, and then decisively rejected.

Several senior members of Reagan’s initial foreign policy team, like Caspar Weinberger (later Secretary of Defense), William Casey (head of the CIA), Jeane J. Kirkpatrick (U.S. Ambassador to the UN), and Richard Pipes (the NSC staffer in charge of Soviet policy), all felt that one should never negotiate with the Soviets.

Their confrontational approach culminated in June 1982, with the CIA sabotage of the computer control systems the Soviet Union had purchased to automate the operation of a new trans-Siberian gas pipeline. “The result,” New York Times columnist William Safire later wrote giddily, “was the most monumental non-nuclear explosion and fire ever seen from space.”

But this approach never really sat well with Reagan himself, who was much more ambivalent about challenging the Soviet Union directly. In January 1982, for example, he approved economic sanctions against the Kremlin, after the crackdown on Polish Solidarity movement, but then quietly rescinded them later that year.

According to Rutgers historian David Foglesong, author of The American Mission and the 'Evil Empire', Reagan's persistent vacillation in standing up to Soviets “contributed to Casey's contempt for the president as indecisive, passive, and mindless.” It was Casey who urged the Saudis to increase their oil production in order to reduce Soviet hard cash revenues. When Gorbachev complained about it in 1986, Reagan said he honestly knew nothing about it.

By 1983, however, Ronald Reagan was already beginning to transition from “Cold Warrior” to “Peace Monger”—eager to conclude the first nuclear arms reduction agreements in U.S. history (START instead of SALT), optimistic about creating a shield that would make nuclear weapons obsolete, and especially anxious to convince the Soviets that he did not want war.

After the release of a group of Pentecostals who had been residing in the U.S. Embassy in Moscow for five years, in July 1983, Reagan wrote to General Secretary Yuri Andropov asking for "a more active level of exchange." His outreach lead to conflicts with his staff. On April 6, 1983, after the National Security Council staff argued that “no approach should be made to the Soviets,” Reagan overruled them. Later that day he wrote in his diary, "Some of the N.S.C. staff are too hard line."

In July 1982 the hawkish Al Haig was replaced by George Shultz as Secretary of State, and Richard Pipes returned to Harvard. By early 1983, the new head of NSC was Jack F. Matlock, a former Russian language teacher at Dartmouth with extensive diplomatic experience in the Soviet Union. Matlock’s very first memo to the president set a new tone: “The United States cannot, from the outside, bring down the Soviet regime,” he wrote, “and that direct attempts to do so would only strengthen it.”

One month later, in May 1983, U.S. Ambassador to Russia, Arthur A. Hartman, said in a speech at Harvard that “an approach to the Soviet Union that emphasizes trade and other contacts . . . offers better prospects for a more peaceful world than trying to seal the Soviets off from all dealings with us.”

In January 1984 Reagan formally abandoned his view of the Soviet Union as an Evil Empire. In a televised address to the nation on Soviet-American relations, he stressed the “common interests” of the two superpowers, and said that nuclear war was the paramount security threat for both the United States and the Soviet Union.

Walking down Red Square just four years later, a journalist asked Reagan whether he still considered the Soviet Union an Evil Empire. “No,” he replied, “That was another time, another era."

What most people still do not realize, however, is the degree to which Reagan’s personal transformation was inspired by his exposure to Russian culture. His guide here was the popular historian Suzanne Massie, who introduced the president to the deep religiosity of the Russian people.

Reagan read Massie’s book, Land of the Firebird, on the eve of his first meeting with Gorbachev in November 1985, and came away from that meeting convinced that Gorbachev was a closet Christian. He began to think of the Russians (not the leaders, but the people) as religious and sentimental, a lot like Americans.

Given that quite a few of Reagan’s ex-advisors, including David M. Stockman, Patrick J. Buchanan, Jack F. Matlock and Paul Craig Roberts, strongly oppose the current Russophobic consensus, one has to wonder how much of today’s animosity is fed by crude views, like those of former Director of National Intelligence James Clapper that Russians are “typically, almost genetically driven to co-opt, penetrate, gain favor.” This view could easily be dispelled by a broader exposure to Russian history and culture.

Sadly, it is hard to even imagine someone like a Robert “Bud” McFarlane today inviting Suzanne Massie to the White House to present a point of view so drastically different from his own. Or, a scholar/diplomat like Jack F. Matlock, envisioning the possibility of not just resetting, but of actually rethinking containment. Sometimes, I wonder if luminaries like the late Librarian of Congress, James H. Billington, or George F. Kennan himself, for that matter, could get a fair hearing in today’s Washington.

We were incredibly lucky to have had such people in Washington at a critical juncture in Russian-American relations. But without a profound reassessment of Russia, along the lines that Ronald Reagan had, it is doubtful we will be so lucky again.