Congress Must End the Bush-Era AUMF 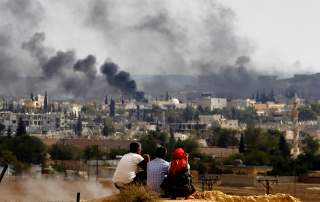 In a weird twist of fate, Senator Bernie Sanders is right about something. After the news hit that tensions with Iran were escalating, Sanders was correct in implying that the limited strike the Trump administration considered conducting following Iran’s aggression ought to be considered an act of war. And it is, but it’s an act of a war Americans absolutely don’t want to start. Thankfully, President Donald Trump did back down, but had he wanted to, he had the power to follow through. It’s precisely the kind of power that shouldn’t be given to one person—Trump or any president at all. Moreover, constitutionally, it’s not.

The authority to wage war is expressly given to Congress in the “War Powers clause” of the U.S. Constitution. Unfortunately, America’s executive branch loves to steal that power for itself, but it’s time for Congress to take back its job. After all, it seems to have a lot more restraint than most contemporary presidents, and it’s safe to assume that including 435 people in the decision-making process would make for decisions with a lot more thought behind them. Since the writing of the Declaration of Independence, Congress has only declared war eleven times. Nevertheless, at presidential behest, American troops have been all over the globe—often in places where they’re both unwanted and unnecessary. That shouldn’t be the case.

The last time Congress declared war was against Romania in 1942. Yet, Washington has since “coordinated attacks” against Vietnam, Korea, the Persian Gulf, Iraq and Afghanistan—and that’s only the short list. It has to end. It just might if Congress put an end to the Authorization for Use of Military Force (AUMF), 9/11-era legislation that was intended to fight those who attacked the Twin Towers in New York. Just last week, the House voted to repeal it—though, of course, in a GOP-dominated Congress, not that much will come of that.

As Sanders said, starting in 2001, Washington framed most, if not all, of its wars as strategic moves to fight terrorism, and that same mindset persists today. After all, the AUMF “authorizes the president to use all necessary and appropriate force” against those who not only orchestrated the attacks on September 11, but also anyone who was somehow affiliated with them. But why does America continue to give the president that authority eighteen years later? This was meant to be a temporary provision in order to show American resilience in responding to the most devastating attack on U.S. soil, and yet this law is still giving immense and disproportionate power to the wrong branch.

Through this ill-planned authorization, the United States currently has troops needlessly deployed in a host of nations: Afghanistan, Iraq, Syria, Yemen, Somalia, Libya, Kenya, Niger, Cameroon, Uganda, South Sudan, Democratic Republic of Congo, Central African Republic, Djibouti, Jordan, Turkey, Egypt, Cuba and Kosovo. In most of these areas, Washington has no way of measuring any type of success, because the purpose of “combatting terrorism” was never explicitly defined. How could Americans ever know if insurgents are gone for good, anyway? When militaries occupy or invade countries to that unclear end, their missions are doomed to error and ultimate failure. For far too long, power-snatching presidents have begun these endless projects. Lest Trump start one of his own, Congress needs to put an end to the AUMF.

Sanders got it right. Of course, it’s unlikely that he has a good idea of how he would go about changing the foreign-policy status quo himself. With no practical solutions or next steps, Bernie didn’t present anything ground-breaking. But someone certainly needs to, because things are getting out of hand.

The American people don’t want one person to have the power to wage acts of war at any given moment. Of course, it’s unlikely to ever be considered by a Republican Senate with a Republican in the White House. But Congress should be infuriated that they’ve lost this crucial power to the President. The presidential license to fight the global war on terror needs to be taken away. No one person should hold that much power. Frankly, it’s just un-American.

Natalie Dowzicky is researcher and project coordinator at a Washington D.C.-based think tank. As a Young Voices contributor, her work has appeared in the Washington Examiner, the National Interest, Townhall.com, the American Conservative, and more. Follow her on Twitter @Nat_Dowzicky.