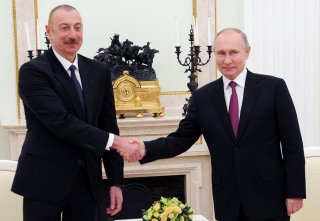 The guns are now silent in Nagorno-Karabakh. Armenia has released its prisoners-of-war and diplomats pressure Azerbaijan to do the same. The Minsk Group, which the United States co-chairs alongside Russia and France, seeks to restore its diplomatic relevance as Azerbaijan blindsided it and the State Department with its September 2020 military offensive on the disputed territory. That action contradicted the basis of its waiver under Section 907 of the Freedom Support Act that enabled the United States to provide Azerbaijan with military assistance.

Rep. Bob Menendez (D-N.J.), chairman of the Senate Foreign Relations Committee, highlighted the challenge that both Turkey and its alliance with Azerbaijan will pose to U.S. foreign policy during his committee’s confirmation hearing for Anthony Blinken, President Joe Biden’s nominee to lead the State Department. Blinken criticized Turkey but did not signal any substantive change in policy.

While continuing the policy status quo toward the Caucasus would be a mistake, part of the reason why the State Department continues to undermine efforts to hold Azerbaijan accountable for its actions is because of the fundamental disconnect between perceptions of Azerbaijan in Congress and the reality of that country’s policy.

While the Armenian lobby vocally promotes U.S. recognition of Armenian Genocide, Azerbaijani diplomats and lobbyists have long maintained a lower but equally effective profile in Congress where they both paint Azerbaijan as both an ally in the war against terror and as a regional bulwark willing to stand up to Russia and Iran. As important, Elin Suleymanov, Azerbaijan’s skilled and extremely effective ambassador in Washington, and a bevy of unregistered agents of influence argue to senators and congressmen that Armenia is beholden both to both Iran and Russia.

It is true that Armenia has ties to both Iran and Russia. Turkey and Azerbaijan’s economic blockade on Armenia makes Iran an economic lifeline to which Armenia can export is agricultural and some manufactured goods. Russia maintains a military base in Gyumri. Troops stationed at the base largely remain confined to it and do not appear active elsewhere in Armenia or the Caucasus. Armenians I interviewed—including those more oriented philosophically toward the West—say that the Russian presence largely serves more as a deterrent to Turkish or Azeri aggression than as an endorsement of Russia’s foreign policy.

In reality, however, Azerbaijan’s ties to both Iran and Russia in recent years have become deeper and more strategically significant than Armenia’s. Azerbaijan’s relationship with Iran was not always positive. While the two countries established diplomatic relations in 1992, Baku accused Iran in 1999 of both spying for Armenia and training militant Islamists to undermine the Azerbaijani government. In 2001, an Iranian warship ordered an Azerbaijani exploration ship hired by British Petroleum to withdraw from exploration operations in a disputed zone within the Caspian Sea. Iranian officials also clashed with their Azeri counterparts over Azerbaijan’s security cooperation with Israel. Iranian resentment toward Azerbaijani secularism kept mutual suspicion high.

In recent years, however, the relationship between Tehran and Baku has grown steadily warmer. In August 2004, for example, the two countries agreed to a twenty-five-year gas swap contract in which Iran would supply Azerbaijan’s landlocked Nakhchivan region and Azerbaijan would deliver has to Iran’s northeastern provinces. In December 2005, Azerbaijani president Ilham Aliyev joined Iranian president Mahmoud Ahmadinejad at the opening ceremony for the new gas pipeline from Iran to Azerbaijan’s landlocked Nakhchivan region as they put the agreement into action.

Such cooperation has accelerated with alacrity in recent years. On April 9, 2014, Aliyev traveled to Tehran. At his audience with Supreme Leader Ali Khamenei, he stressed the “importance of broadening Azerbaijan-Iran ties even further.” Ali Hasanov, the head of the Department of Social and Political Affairs at the Azerbaijani presidency, explained at the time that Aliyev’s visit to Iran was the “beginning of an important stage for development of friendship and partnership . . . and deepening mutual cooperation.” Shortly after, Azerbaijan hosted an Iranian trade delegation comprised of fifty Iranian companies led by Mahmoud Vaezi, Iran’s minister of telecommunications and information technology.

In 2015, the rapprochement deepened. Iran announced its support for the Azeri position in Nagorno-Karabakh, and the two countries formed a joint defense commission. Six months later, the two countries signed a memorandum of understanding to construct a north-south railway, part of the growing linkage between Iran, Azerbaijan, and Russia. Baku and Tehran reached agreements to link the two countries’ power grids shortly after. On Feb. 23, 2016, Aliyev returned to Iran to sign eleven documents, including an agreement for the construction of hydroelectric plants on the Aras River. These applied specifically to regions that Azerbaijan had lost to Armenia in 1994, and signaled the economic logic behind the Islamic Republic’s shift from Armenia to Azerbaijan. (According to the Persian language press, these projects are now moving forward). Other commercial agreements quickly followed. Subsequent announcements showed these agreements were not only aspirational but real as the two countries fulfilled their agreements. Over the past decade, Azerbaijani imports to Iran have quadrupled to almost $500 million. As the Trump administration implemented a “Maximum Pressure” campaign on Iran, Azerbaijan became a major lifeline for the Islamic Republic. Consider: Between January and August 2020, Iranian exports to Russia via Azerbaijan amounted to $1.5 billion; over the same period the year before, the total was just $4.3 million.

Other aspects of the bilateral relationship should have raised alarm bells in Washington. On a June 8, 2016, visit to Germany, Aliyev reportedly admitted that Azerbaijan had been buying weaponry from Iran. Iran-Azerbaijan military cooperation picked up pace over the following year and, in 2018, the two countries reached an agreement to jointly produce military equipment. This means that U.S. arms sales to Azerbaijan risk bettering Iran’s own domestic armament industry. A 2018 Agreement on a legal convention to govern Caspian waters removed the major barrier to further cooperation. Bilateral military cooperation accelerated in 2019 even as Azerbaijan feigned cooperation with U.S. sanctions on Iran. While Suleymanov continues to assure Congress that Azerbaijan is an ally in the war on terror, Azerbaijan’s foreign minister Elmar Mammadyarov lamented the death of Iranian Qods Force Chief Qasem Soleimani.

Tehran and Baku also signed a memorandum of understanding to extend media cooperation. Aliyev told Khamenei during a meeting on March 5, 2017, in Tehran that both countries actively supported each other’s positions in international organizations. In 2016, Azerbaijan, Iran, and Russia began holding trilateral summits to advance their strategic axis, the first of many.

Of equal importance has been the further development of the north-south transport corridor. On March 7, 2016, Iran, Azerbaijan, and Russia signed a memorandum outlining further rail cooperation and reduction of trade tariffs. In order to implement the corridor, Aliyev loaned Iran $500 million. Iran and Azerbaijan continue to develop facilities and protocols to further the project.

Aliyev now brags openly about how Azerbaijan’s cooperation with Iran and Russia comes at Armenia’s expense. In his 2021 New Year’s address, the Azerbaijani president declared that “there is a trilateral format involving Azerbaijan, Iran and Russia. Does Armenia have such a format with any other countries? No! This is a clear example of how correct our policy has been.”

Azerbaijan’s turn to Russia has been just as striking. Indeed, Aliyev is quickly defining himself as Azerbaijan’s most pro-Russian president since Ayaz Mutalibav, a former communist official who ruled Azerbaijan from 1991–1992. While the two countries enjoyed cordial relations in subsequent years, the 2008 Georgian War appears to have been a turning point as the conflict weakened Baku’s faith in the West’s capacity to oppose Moscow’s revanchism and power projection. Aliyev traveled to Moscow just one month after the cessation of hostilities in Georgia to lay the groundwork for a new relationship between Russia and Azerbaijan. It was the first of many other Aliyev visits to Russia.

Moscow and Baku’s formal delineation of their border in 2010 removed the chief impediment to economic cooperation. Whereas in 2001, Azerbaijan imports from Russia totaled perhaps $100 million, today, they surpass $2 billion. Aliyev, meanwhile, allowed Russia to expand cultural and educational programs in Azerbaijan. Indeed, the last decade has witnessed numerous economic agreements, especially in the energy sector. Military trade also increased. In 2017, for example, the Azerbaijani Army reportedly received a new batch of Khrizantema-S anti-tank missile systems from the Russian Federation. In 2018, Azerbaijan hosted a conference for senior Azeri and Russian officials in Jojug Marjanli, a town transferred from Armenian control in the April 2016 “Four-Day War.” Significantly, the conference was titled “Baku-Moscow Geopolitical Axis: Azerbaijan is Russia’s Only Ally in the South Caucasus.” The feeling is mutual. On April 4, 2020, the Russian Foreign Ministry declared Azerbaijan to be “Russia’s major strategic partner.” Russia and Azerbaijan are now openly discussing nuclear cooperation.

There is grave danger when the White House and State Department calibrate policy to perceptions of what a country once was rather than what it has become. The United States’ strategic posture suffered because both the George W. Bush, Barack Obama, and Donald Trump administrations wished to see in Vladimir Putin a willingness to cooperate productively which, simply, was never there. The same pattern has been true with Turkey and China where, for too long, American officials have been deceived or in denial about the malign intents of their leaders. Alas, Azerbaijan too must now be included on such a list. The Azerbaijani embassy and its lobbyists might paint Azerbaijan as a country that stood by America in the dark days after the Sept. 11, 2001, terror attacks but that is not the Azerbaijan of today. Instead, Azerbaijan has become a strategic ally of both Iran and Russia, maintaining its pro-Western façade only to avoid accountability in Washington for its strategic turn. Simply put, to arm or support Azerbaijan today is to empower the Kremlin and Khamenei, not to bring security or further American interests in the region.