Congress Shouldn't Mess with the Fed 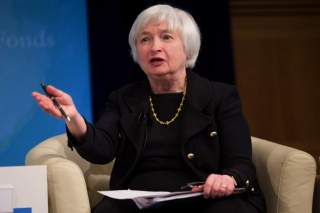 At her recent Humphrey-Hawkins testimony, Federal Reserve chair Janet Yellen found herself defending the independence of the institution that sets the nation’s monetary policy. The pressure, while not a new phenomenon (Rand Paul has been suggesting the Fed be looked at for a while), does seem to be building.

Recent suggestions have ranged from the adoption a specific rule to guide policy to an external review of Federal Reserve decisions. None of these will cause policy outcomes to be any better than they are now, though. Monetary policy that runs at the speed of Congress is a deeply disturbing thought. Political gridlock could do real harm to the U.S. economy.

Political interference is inevitable at some level. Monetary policy can be a powerful political tool. And there are good reasons for lawmakers to pressure for oversight now. Many observers—not only economists—see the Fed’s actions in the early days of the Great Recession as having staved off something potentially far more vicious. Meanwhile, the recovery suffered from prolonged periods of countercyclical cuts in government spending that the Fed was forced to ease policy through.

Congress already has fiscal policy at its discretion, and both fiscal spending and monetary policy are powerful. Fiscal stimulus, cutting taxes and increasing spending on infrastructure, provides a powerful boost directly to constituent income statements. And monetary policy can affect balance sheets by causing asset prices to move higher. At the moment, these two policies are determined separately in the United States (and most developed countries). Monetary policy rests with the Fed, and fiscal policy with Congress—and it should stay that way.

After the Great Recession, there were calls for more coordinated action on the part of fiscal and monetary policy to accomplish goals more quickly in the wake of, or during, crises. The fiscal’s and monetary’s independence from one another allows them to intentionally act in concert or not. For example, the Federal Reserve decides to lower interest rates and Congress passes a stimulus bill—the two are acting independently, but in concert. Furthermore, it requires that two independent bodies to determine the current, and future, economic situation deems stimulus necessary—a sort of economic system of checks and balances.

Economic cycles do not and should not coincide with political cycles. Take the case of the Central Bank of the Republic of Turkey (CBRT). It is by law an independent institution currently attempting to contain inflation. But it does not appear as though the CBRT will stay independent for long. After Turkish president Recep Tayyip Erdogan stated that inflation rates will move lower, so long as interest rates are reduced—that is what he said, and, yes, it is poor economics—he stated that supporting high interest rates is treasonous. Erdogan persistently called for lower interest rates, and the CBRT has obliged, though not as aggressively as the president would prefer. There is an election in Turkey approaching, and the temptation for Erdogan to coerce the CBRT into making a policy error for political gain may be overpowering.

It is unlikely the Fed will experience outright threats and calls of tyranny. Any hint of political maneuvering through Fed policy would be skewered by the media, and it is unlikely individual views on interest-rate direction or levels will ever be considered treasonous. But there are reasons politicians cannot resist pushing for oversight or exerting soft power on the monetary authority. The tools that Central Bankers wield are powerful and therefore attractive to those who want power.

Turkey is not the only country with a Central Bank being twisted from its purpose. Becoming part of the Troika and overseeing the Greek bailout blurred the nature of the European Central Bank (ECB). Instead of providing stability in times of economic strife, the ECB became a political tool and source of volatility and instability (imagine the Fed monitoring a bailout of Illinois). Of course, the threat of being cut-off from ECB lifelines may deter Greek officials from pushing the limits of their current package, but it may also cause Greeks to stop looking at the ECB as a backstop and more like a German weapon to impose and perpetuate austerity. The ECB has shifted from politicized to weaponized—it can threaten to inflict enough damage to destroy an entire economy if its demands are not met.

Yellen’s fear is that the Fed will become too much like the ECB or the CBRT. Both institutions are heavily politicized and far less effective in achieving monetary goals than the Fed. The Fed would increasingly begin to resemble a bureaucracy and not its current large-but-nimble self. In many ways, the Fed may be a victim of its own underpoliticization. Under previous chairs, the United States maintained a low exchange rate for an extended period of time to enhance economic competitiveness and keep or create jobs that would not otherwise exist—i.e. it acted like a Central Bank that was politicized. Yellen should continue to fight the calls for Congressional oversight and second guessing—not because Fed decisions are without flaw, but because mixing politicians with monetary policy would create far worse outcomes.