Congress: The Last Line of Defense in the Iran Talks 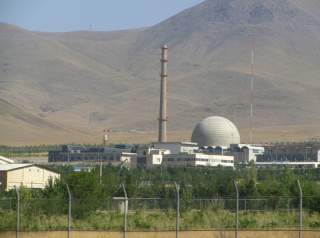 Now that the United States, its allies and Iran have agreed again to extend nuclear negotiations, the onus is now on Congress to take on the responsibility of making Tehran pay for its continued nuclear intransigence. Iran continues to run out the nuclear clock and treat Western concessions to its demands as permanent—making further diplomatic progress conditional on greater Western “flexibility.”

Obama administration officials are on record committing to a deal that will “dismantle” “a lot” or "significant portions" of Iran’s nuclear infrastructure. But Congress is concerned that the goalposts appear to be moving, with the Obama administration signaling flexibility on a range of issues that will make it more likely that Iran will be left with the infrastructure it needs to build a bomb.

By contrast, Iran’s supreme leader, Ayatollah Ali Khamenei, is standing firm. He has made it clear that any deal Tehran signs must not cross his “red lines,” which include increasing Iran’s uranium enrichment capacity to nineteen times what it is today, and getting full and immediate relief from all international sanctions.

Of course, a negotiated agreement is the preferred solution to peacefully prevent Iran from achieving a nuclear-weapons capacity. But Iran does not appear to be ready to compromise. Moreover, Iran’s record of nuclear deception, role as the leading state sponsor of terrorism and egregious human-rights abuses inspire little confidence in Tehran’s commitment to honor whatever agreement is reached.

Lest we forget, Iran is at the negotiation table because Congress passed tough economic sanctions that hammered its economy, and many of them over the Obama administration’s objections. But Congress’ work is not done. It must ensure that Iran does not retain the essential elements of its nuclear infrastructure to develop a nuclear weapon and continue gaming the international community.

Congress can help achieve this goal by laying out clear parameters for what constitutes an acceptable deal, putting in place “sanctions-in-waiting” to increase American leverage, establishing a strict timeline for the conclusion of a nuclear deal to stop Iran from running out the clock, and ensuring that a final deal is put to a vote in Congress. These ideas already are part of existing legislative proposals.

These measures are likely to play an important role, because senior administration officials may be reticent to respond to evidence of Iranian cheating after a deal is struck, primarily because a deal would make American policy path-dependent—beholden to a deal it made, regardless of subsequent developments. But reticence could also stem from fear that vigorous enforcement could lead to Iranian countermeasures, such as a vigorous resumption of the nuclear program or even taking actions that could upset the balance in an already volatile Middle East. Indeed, reports suggest a growing U.S.-Iranian “détente” and possible American-Iranian coordination to weaken the Islamic State.

The Iranians reportedly are insisting on the immediate lifting of UN sanctions, which President Obama called “nonnegotiable.” Based on press reports, however, it appears that the Obama administration, and perhaps the EU and UN Security Council, are designing a phased-program of sanctions relief, using “suspensions” and snapbacks, where sanctions will be suspended and then reimposed in the event of Iranian noncompliance.

Reimposing sanctions is harder than it sounds. Amongst the United States, EU and UN, there are bound to be significant disputes on the evidence, differing assessments of the seriousness of infractions, fierce debates about the appropriate level of response and concerns about Iranian retaliation.

It’s also important to remember that when sanctions were first implemented, it took years before a critical mass of international companies terminated their business ties with Tehran. Once strictures are loosened, with so many international companies positioning to get back into Iran, it will be very difficult to persuade these companies to leave again. The Iranian regime will also adopt countermeasures to minimize its economic exposure to Western pressure when it anticipates that it will violate any nuclear agreement.

Iran has already enjoyed substantial economic benefits from the ongoing negotiations that improved macroeconomic conditions. The Obama administration seriously underestimated the value of sanctions relief provided as part of the November 2013 Joint Plan of Action and did not account for the psychological impact on Iran’s macroeconomic environment. As a result, the Iranian economy has shown signs of stabilization, as reflected in modest GDP growth, a stabilization of Iran’s currency and a significant drop in inflation.

As Iran’s economic recovery becomes more durable, and less susceptible to snapback sanctions, economic pressure will diminish as an effective tool for responding to Iranian nuclear noncompliance. This will make it more likely that the United States will be forced to choose between either tolerating Iranian cheating, or using military force to respond to violations—which is wholly unrealistic, given that the regime tends to cheat incrementally, not egregiously.

Congress has a vital role to play here. It can protect and enhance U.S. economic leverage. This leverage will be essential to reaching and enforcing a deal that is bound to fall short of its own bipartisan requirements. And it could be the last line of defense to punish the full range of Iran’s illicit and dangerous activities. By defending the sanctions house it built, Congress can make the difference between a nuclear-armed Iran (and an ensuing regional nuclear-arms race) and a more secure and stable region.

Mark Dubowitz is the executive director of the Foundation for Defense of Democracies and head of its Center on Sanctions and Illicit Finance.