Congress of Vienna Redux: How the OSCE Can Foster Peace in Ukraine 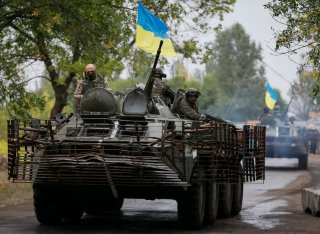 The path to a diplomatic resolution of Russia’s invasion of Ukraine remains uncertain and, at this stage of the fighting, there is no definitive picture yet of the border lines on which combat might end. At this point, it is at least clear that Russia will not turn Ukraine into a puppet state. Beyond that, however, the odds that Ukraine will militarily restore its borders to how they stood when Kyiv gained its independence in 1991, including by restoring sovereign control over Crimea, appear remote. Whether both sides can end up accepting the borders as they existed on February 24, namely with Russia occupying Crimea and separatists controlling the Donestk and Luhansk oblasts in the Donbas region, is also uncertain. At the beginning of the conflict, Ukrainian president Volodymyr Zelenskyy suggested a potential openness to neutrality status. Since then, with recent successes on the battlefield, he has backed off from that position and expanded his war aims. Recently, for example, one senior Ukrainian general called for expelling Russia from Crimea.

The diplomatic framework under which serious peace talks will be pursued is just as murky as how the fighting might end. The real negotiations will be up to the combatant parties: Ukraine and Russia. It is far from clear at this point exactly what roles other European countries or the United States might play in the process, nor has any plausible format emerged as to how outside parties might become involved in the negotiating process.

If history can be a guide, it is worth considering the approach taken by European powers at the Congress of Vienna. The Napoleonic Wars ravaged Europe for over a decade until peace was restored in 1815 at the Congress. Under Napoleon Bonaparte, France’s Grand Army invaded numerous states, conquering the Low Countries and western Germany. France established satellite kingdoms in Italy, Spain, Poland, and parts of Germany. Finally, Napoleon invaded Russia, reaching Moscow before he was forced to retreat and meet his ultimate defeat at Waterloo on June 18, 1815. Historians have estimated that as many as seven million people perished in these wars.

Despite the suffering and destruction inflicted by these French invasions, when it came time to make peace, the victorious powers were generous. The Quadruple Alliance, the victorious coalition of Great Britain, Austria, Russia, and Prussia, did not exact punishment or revenge on France. Instead, it moved to create a better structure to maintain stability among European nation-states. France was not forced to pay crippling indemnities to the victors and its borders were reestablished as they were in 1789, not carved up by occupation forces. In 1818, a defeated France was welcomed into the Holy Alliance (the Quadruple Alliance’s successor). French king Louis XVIII, who was restored to the throne after Napoleon’s defeat, even appointed Talleyrand as his foreign minister, the same position the cold-eyed realist had held throughout the French Revolution and under Napoleon. Following agreements reached at the 1815 Congress of Vienna, the Holy Alliance engineered the longest period of peace that Europe had known, founded on balance of power principles. Except for the 1854 Crimean War, Europe enjoyed broad peace for the first forty years after the Congress. Peace then endured for another sixty years without a general war until 1914.

Today, the West’s efforts are aimed at holding Russia to account for invading Ukraine and ensuring that it never engages in such barbaric actions again. NATO and the European Union have rallied strongly to support Ukraine, both with military-logistical support and broad economic sanctions that have isolated Russia from Europe and crippled the Russian economy.

Not as well recognized at this point is that apart from holding Russia accountable for its actions, another strategic challenge looms. It is not enough to restore Ukraine’s borders to where they stood before February 24, when Russia launched its attack, or to where Ukraine’s original borders stood when it attained independence in 1991. It is evident now that the 1991 collapse of the Soviet Union and the end of the Cold War has not resulted in the creation of a stable security environment for Europe. Russia, licking its centuries-old historical insecurities and grievances, has grown ever more hostile and frustrated over NATO’s expansion east, and the incorporation of former Warsaw Pact countries into the European Union.

Moscow invaded Georgia in 2008, annexed Crimea and fomented civil war in the Donbas region in 2014, militarily intervened in Syria in 2015, meddled in the 2016 U.S. presidential elections, poisoned a former Russian officer and his daughter in England in 2018, and repeatedly threatened its neighbors with energy supply cutoffs. Most ominously of all, as Moscow has moved away from the West, it has turned steadily toward China. During Putin’s meeting with Chinese president Xi Jinping at the 2022 Winter Olympics in Beijing, the two leaders declared that their countries’ relationship “surpasses an alliance and that there are no prohibited areas of cooperation.” China went so far as to express formal support for Russia’s demands for longer-term security guarantees in Europe for the first time.

The United States and the West have nothing to gain by pursuing policies that push a cornered and humiliated Russia into a closer strategic relationship with China on the Eurasian continent, where the two countries share the world’s sixth-largest border, 2,600 miles long. The long-term economic isolation of Russia will only strengthen China’s strategic position against the United States. Washington and NATO will not benefit from a growing alliance between the two major nuclear and conventional military powers on the Eurasian land mass. On the economic side, the long-term isolation of Russia with Western sanctions will only encourage Moscow to turn east for business. With less oil and gas to sell to the West, Russia will likely develop new fossil fuel pipeline networks with China. China’s strategic dependence on Middle East oil, which must be transported through militarily vulnerable choke points such as the Molucca Straits, will be diminished.

The West is going to have to figure out how to resolve the Russo-Ukrainian War while simultaneously bringing lasting stability to Ukraine and Europe without pushing a paranoid Russia further into China’s arms. A Congress of Vienna-type approach could be an option under the multilateral framework of the Organization for Security and Co-operation in Europe (OSCE), founded in 1975. Headquartered in Vienna, over fifty-seven countries are members of the OSCE, including Russia, NATO countries, Finland, Sweden, as well as peripheral Eurasian states such as Mongolia. The OSCE might be the only realistic diplomatic framework under which all relevant parties might try to begin to address the centuries-old problem posed by Russia’s deep-seated fears of the West. Creative diplomacy, reminiscent of the Congress of Vienna, will be needed with less of a focus on simply punishing Russia, however justified. If Washington and its allies are reluctant to take that course while Putin remains in power, preferring instead to maintain sanctions and isolation policies until regime change occurs in Moscow, the holdup may be as indefinite and open-ended as the wait for leadership changes in North Korea and Cuba has been over the last six decades. Europe cannot afford to wait that long to achieve a stable security situation with Russia.