This Congressional Bill Could Corrode America's Relationship with China 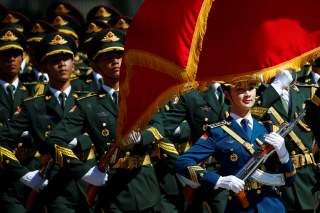 Fresh off aggressive action against Russia, the U.S. Congress is turning to Asia and America’s increasingly precarious strategic position. After the Obama administration’s underwhelming follow-up to its Asia pivot, and President Trump’s decision in January to withdraw the United States from the multilateral Trans-Pacific Partnership trade agreement, Colorado Republican Sen. Cory Gardner’s Asia Reassurance Initiative Act (ARIA) aims to reinvigorate U.S. leadership in the Asia-Pacific among increasingly wary allies and partners. ARIA centers on three components: security, economics and values. Given the objectives of the legislation, there is little doubt ARIA is at least in part meant in response to China’s growing power. Should the legislation pass and the Trump administration adopt its main initiatives, the United States will need to demonstrate careful dexterity in execution, lest it generate unwanted outcomes, and consider how China might respond, to reduce the risk of major-power conflict.

The legislation proposes to “strengthen U.S. security commitments to [ . . . ] allies and build partner capacity in the Asia-Pacific region to deter aggression [and] project power.” This will be done by increasing the U.S. military presence in the Asia-Pacific, including regular freedom-of-navigation and overflight operations in the East and South China Seas, and greater assistance helping allies and partners build more capable maritime forces. Furthermore, Washington will help establish “new regional security partnerships” and develop a greater relationship with the Republic of China (Taiwan).

The United States wanting to reassure its allies in the Asia-Pacific region is understandable, as credibility is an essential part of international-alliance maintenance. China understands this and will not be surprised at ARIA’s security objectives. However, expanding the military capabilities of allies and partners—coupled with an increased U.S. presence and the promotion of stronger regional security relationships—will likely motivate China to commit even more resources to military modernization, hardly something that will calm tensions with its neighbors.

ARIA could very well lead to an arms race between some Asia-Pacific nations and China and increase the risk of miscalculation, thus heightening the chance of military conflict. Moreover, greater tension spurred by a more aggressive U.S. posture and presence could place regional nations in a more difficult position when trying maintain amicable relations with China while also relying on U.S. military power as the security blanket of last resort. The United States needs to be careful not to force them to choose sides.

Beijing is already quickly modernizing its naval forces, which will include more aircraft carriers, advanced surface combatants and advanced submarines. Beijing knows the United States is the only power that can seriously challenge it in the Western Pacific, and it will intensify its military modernization effort as a way to ensure it can exact a serious cost to the United States in any conflict. Furthermore, as regional nations attempt to bolster their defenses with U.S. help, China will maintain and even seek to increase its overmatch capability against them, and should be expected to consolidate and expand its territorial gains in the South China Sea.

Beijing could also use economic leverage against countries in the Asia-Pacific to prevent or stall their military upgrades. The drop in Chinese tourism to South Korea, along with the less hospitable business environment in China that ensued for South Korean companies, that followed South Korea’s decision to allow the U.S. deployment of the Terminal High Altitude Area Defense (THAAD) system is one example.

Regular U.S. freedom-of-navigation and overflight operations would elicit a sharp response from China, except Beijing’s rhetoric will likely resonate even more deeply with Chinese at home and further inflame nationalist sentiment. With each country accusing the other of escalating tensions, trust between Beijing and Washington may deteriorate to an unhealthy level where cooperation on areas of mutual interest becomes difficult or unlikely. China could even begin anew its own freedom-of-navigation and overflight operations, at least in a unique way, as it did through the Miyako and Tsugaru Straits.

The ARIA legislation’s aim to enhance the relationship between the United States and Taiwan would have consequences as well. Recently, Beijing announced that its “truce” with Taipei, in terms of diplomatic recognition, was over. China could quicken the pace of “poaching” Taiwan’s diplomatic partners to further isolate it diplomatically. Furthermore, a “Fourth” Taiwan Strait crisis may more easily occur. Beijing has not been shy about sailing the Liaoning aircraft carrier and flying nuclear weapons-capable bombers around Taiwan. It would not be surprising for China to increase the number and frequency of military actions against Taiwan, as well as conduct other military drills warning Taiwan of the consequences of independence.

Finally, should Washington encourage and manage to formulate new security arrangements among the Asia-Pacific nations, Beijing will view this as confirmation the United States intends to encircle and contain China. That perception will surely drive China closer to Russia and towards a more intransigent position on North Korea, aiming to maintain it as a buffer to U.S. forces in the region. Not only would China attempt to balance against a U.S.-led security arrangement, but China would also resist further cooperation with the United States on a host of issues where it felt it could afford to do so.

Concerning economics, ARIA aims to improve market access to U.S. businesses and boost trade in the Asia-Pacific, with an emphasis on intellectual property right protection and creating American jobs.

While resisting and countering ARIA’s economic pressure where they can, President Xi and the Chinese leadership may also see an opportunity to build wider support for badly needed—and certainly painful—economic reforms. Indeed, President Xi recently called for further market reforms and acknowledged that China needs to do more to ensure foreign companies can compete on an equal basis with domestic firms.

Moreover, Beijing is attempting to shift the nation’s economic-growth model to one driven by consumer consumption and a larger service industry. Pressure from the United States for increased intellectual property rights might help the Chinese leadership push these and other reforms through and gradually ease the corporate debt burden, spur more widely based innovation, and transition to a consumer-based economy. This not only would help Beijing, but could also reduce the U.S. trade deficit, one of ARIA’s objectives.

Finally, ARIA reaffirms the U.S. commitment to promoting democracy and championing human rights in the region.

China historically reacts harshly when the United States makes human rights and democracy a point of discussion in bilateral relations, and will even feel threatened if the United States emphasizes these values in dealing with other Asian nations. Given its transactional foreign-policy predilections thus far, it is hard see the Trump administration taking up ARIA’s emphasis on values. Thus, China will probably ignore it, unless the Congress puts enough teeth into it where it can genuinely influence the trajectory of the relationship and give comfort to the much beleaguered Chinese dissident movement at home and abroad. In that case, Beijing will probably only intensify its suppression of free expression and democracy activism.

China has a rich history of its own schools of thought that inform social and political development. The narrative put forth by the Communist Party of China consistently portrays foreign criticism of its human-rights record and illiberal political system as an attempt to “civilize” or “colonize” China through Western ideas. The government has already demanded Chinese universities ban teaching “Western” values, which include human rights, from classrooms. Renewed U.S. emphasis on democratic values will undoubtedly be met with greater suppression of “non-Chinese” values and ways of thought.

If the United States truly intends to elevate democracy promotion and human rights as part of an effort to reassert leadership in Asia, it needs to be prepared for China’s backlash and stay the course in the long run. China will always bet the United States will retreat on values in the face of more pressing practical interests. For it to really mean something to the other Asian nations, U.S. resilience on a values-promotion agenda will matter much more than rhetoric.

Vigorous U.S. leadership in Asia has wide bipartisan support, and the Asia Reassurance Initiative Act can be messaged to the region not as an effort to threaten or contain China. China, however, will never perceive it as anything but threatening. Beijing clearly believes it has made progress in recent years at diminishing U.S. influence in the Asia-Pacific region, and will be loath to surrender those gains. Furthermore, recent polling by Pew and others shows Chinese nationalism, or exceptionalism, at an all-time high in modern China. ARIA may be long overdue and right for the United States, but its passage will almost certainly worsen U.S.-China relations. How bad and potentially dangerous they get will depend on how deftly the administration manages its Asia foreign policy in its wake.

Bill Bray served as a naval intelligence officer for twenty-eight years before retiring in 2016. He is a managing director in Ankura Consulting Group's geopolitical risk practice. He concurrently serves as research director and head of Asia analysis.